I would have voted against a law school for Dallas. Why build a new law school when a law school already exists at SMU? There are two alternatives to building a new law school in Dallas. (1) Arrange for the state to pay the operating costs for the SMU law school. This is a lot cheaper than building a new law school from scratch—no construction costs. (2) The rationale for a second law school in Dallas is apparently that many aspiring law students cannot afford the $34,000+ tuition at the SMU law school for full-time students. (Part-time students pay a little over $23,000.) Just set up a state-backed student loan fund for these students to enable them to attend SMU. Again, it’s a heck of a lot cheaper than a new law school. The trouble with a second law school is that it will inevitably be second-rate, just as remote campuses of major universities—I’m thinking of the far-flung campuses of North Texas State in South Dallas, of Texas A&M in San Antonio, and of Texas State in Round Rock—are never going to be able to offer the quality of education that is available at the main campuses. The best professors will never be attracted to these satellite campuses, and the new law school will never be able to compete with SMU for faculty. We’re paying $40 million for mediocrity. There is another reason why it makes no sense to establish a law school in Dallas. I would argue that the prospects for the legal profession in the future are shrinking, not expanding. The legal world is moving toward cheaper alternatives to litigation, such as arbitration and mediation. Corporate clients are onto the billable hours scam; increasingly, they are going to want to negotiate their fees. The forced retirement age at some big firms is 55. (This is driven by senior partners who want a bigger slice of a shrinking pie.) I’m not just making this up. Readers may recall Chief Justice Wallace Jefferson’s state of the judiciary speech in 2007, when he lamented that arbitration and mediation have reduced the quantity of lawsuits, with the result that the common law is not evolving. Tort reform has also impacted the practice of law. Caps on punitive damages and exemplary damages have made certain kinds of cases (notably, medical malpractice) non-lucrative for plaintiffs’ lawyers, and when plaintiffs’ attorneys aren’t working, neither is the defense bar. Why build a law school when the market for new lawyers is not great? 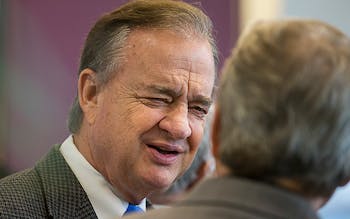