Things are about to get ugly in the speaker’s race. The Craddick forces, led by several longtime loyalists (I want to run another check on the names), are trying to stir up a coordinated campaign to put pressure on wavering colleagues to vote for Craddick. According to credible reports I have received from Republican operatives, they are asking members to call various GOP and conservative groups with which members may be connected. The purpose is to get activists in these organizations to call House members and urge them (a) to support Craddick and (b) to oppose a secret ballot for the selection of the speaker. One of the first shots in this battle was fired by Republican County Chairmen’s Association president Linda Rogers. She sent a letter to all GOP county chairs warning that “Texas Liberals are attempting to take over our State House of Representative by nefarious means.” As the Quorum Report pointed out, among the people “attempting to take over” the House are conservative Republicans Burt Solomons and Jim Keffer, and the “nefarious means” are a vote of the members of the House of Representatives, as specified in the Texas Constitution. So members can expect to spend their Christmas holidays being badgered by county chairs and members of Republican womens’ clubs, right-to-life organizations, and any other affiliated groups. No doubt the State Republican Executive Committee (SREC) members will get their shots in too. As the Republican apparatchiks gear up to support Craddick, the speaker’s race is likely to become an issue in state GOP politics. Tina Benkiser, the current chairman of the Republican Party of Texas, is a virtual certainty to become the vice-chairman of the Republican National Committee. Party rules require that if the RNC chairman is male, the vice-chairman must be female (and vice-versa). Since Benkiser appears to be the sole female candidate for vice-chair, and all of the candidates for chairman are male, she can hardly lose. Her successor at the RPT will be chosen by the 62 members of the SREC (a man and a woman from each of the 31 state Senate districts). Among the leading candidates are Denise McNamara, one of the two RNC members from Texas, and Gina Parker, who lost her race for RPT chairman to Benkiser. Former RPT vice-chair David Barton and attorney Kelly Shackleford wield a lot of clout with the SREC. One can picture the various candidates sparing no threat to prove themselves most adept at delivering votes for Craddick. The problem for Craddick is that things have gotten to the point where every time he acts like, well, Craddick, he reminds GOP members why they wish he would just go away. Many members are still fuming about Craddick’s iron-fisted control of members’ races. Candidates had to come to Austin and appear before Christi Craddick, the speaker’s daughter; operative John Colyandro; and consultant Dave Carney. They were told what they had to do in their campaigns in order to get money that the speaker controlled. They had to bring their campaign plans and subject them to Christi Craddick’s scrutiny. She could overrule the members and insist on their using speaker-approved campaign materials that had already been prepared by consultants. Many members were furious; they felt that they knew their districts better than Carney, who is from New Hampshire, or Ms. Craddick. These hard feelings have not subsided. Another source of ill will for Craddick is the redistricting map that the Legislative Redistricting Board adopted in 2001. A lot of Republicans have been defeated because of that map, which was supposed to make the House safe for Republicans for a decade. It is apparent, in retrospect, that the map adopted by the Legislative Redistricting Board was drawn to elect not just a Republican speaker, but a Republican speaker named Craddick. It was drawn to maximize Republican districts, not to safeguard incumbents. Craddick couldn’t settle for 85 Republicans, because, back in 2001, there were 15 to 20 ABC Republicans who would never vote for him for speaker. To get more GOP districts, safe seats had to be sacrificed for more marginal seats. These are the seats Republicans have been losing: a net of twelve seats lost to the Democrats since Craddick became speaker in 2003. I think Republicans in the House are finally beginning to realize the damage that Craddick has done to the GOP majority. Does it mean that the GOP rank and file will turn against him? The discontent with Craddick is far greater than I thought it was. But at the moment, it appears that fear still outweighs outrage. 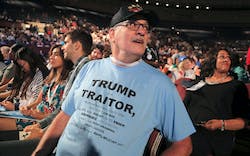 Love Him or Hate Him, the State Party Conventions Were About Trump 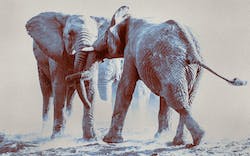