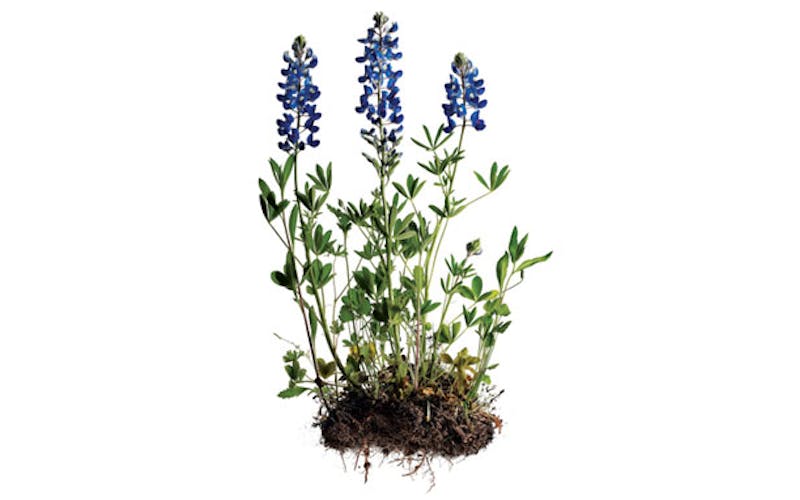 Texas has six state flowers, all of them species of the genus Lupinus, more commonly known as bluebonnets. (The name refers to the flowers’s petals, which resemble a pioneer woman’s bonnet.)

As lovely as most Texans believe the bluebonnet is, the decision to designate it the state flower was not inevitable. As contributing editor Jan Reid wrote, when the Texas Legislature was discussing the matter in 1901, one member suggested bestowing that honor to the cotton boll. During arguments at the Capitol, “Uvalde’s John Nance Garner voiced a paean to cactus blossoms with such grandiloquence that he was thenceforth known as Cactus Jack. When Cuero’s John Green nominated the bluebonnet, colleagues shouted, ‘What’s that?’ Members of a women’s patriotic society witnessing the debate dashed to an Austin parlor and returned with another incipient Texas institution—a painting of bluebonnets. ‘Deep silence reigned for an instant,’ history records. ‘Then deafening applause fairly shook the old walls.’”

But, as senior editor Patricia Sharpe wrote in 1997, the bluebonnet that reached that esteemed position “was the wrong bluebonnet. Embarrassingly, our august lawmakers had designated the relatively obscure and somewhat pallid species L. subcarnosus instead of the radiant and widespread, deep blue L. texensis. Not until 1971 was the goof corrected and all bluebonnets included.”

Bluebonnet seeds can lie on top of or under the soil for up to 35 years before they germinate. Strongly rooted, nitrogen-rich legumes, bluebonnets want daylong sun and drainage, explaining their tendency to congregate on slopes. Reid wrote, “Different species of bluebonnets have adapted to the sands of East Texas, the desert climate of the Trans-Pecos, and the cool barrens of the northernmost Panhandle. The most flamboyant species—Lupinus texensis—favors the central grasslands and the Edwards Plateau; its best range is a rough diamond bounded by Alice, Huntsville, Waxahachie, Brownwood, and Fredericksburg. To see them, drive the coastal prairie from Houston to Port O’Connor; start in Brenham and wander fifty miles in any direction; or strike west from Austin and follow the lakes of the Colorado River.”

The flowers have been photographed and painted so often they have become a permanent fixture of Texas life. Well-known bluebonnet painters include Julian Onderdonk, Robert Wood, Porfirio Salinas, G. Harvey, Dalhart Windberg, and W.A. “Bill” Slaughter, who executive editor Skip Hollandsworth profiled in 1997. In April 2012 Texas Monthly commissioned seven photographers to take pictures of bluebonnets, a Texas spring tradition as old as film itself, the results of which ranged from sentimental and nostalgic to irreverent and cheeky. The flowers have been featured numerous times in the magazine, and even on the cover, despite a proclamation by Michael R. Levy, Texas Monthly‘s founder and publisher, in the inaugural issue, that “Texas Monthly is a major effort in magazine journalism. We’re not competing with the vapid Sunday supplements with bluebonnets on their covers.” This quip elicited a flurry of outraged letters defending the state flower, which led to a staff meeting where, by an eight-to-two vote (one abstention), the magazine adopted as official policy the statement that “We, too, love our bluebonnets, a roadside or field of which is just about the most beautiful sight in the world.”