His hands on the steering wheel of an off-road utility vehicle, Larry Barton bounces along a few of Indian Mountain Ranch’s trails looking for brown-striped piglets. This is his ranch, so the area—a mix of open grasslands, dense woods, and plenty of mud pits, midway between Fort Worth and Abilene—is familiar to him. But the piglets are tough to find.

Then, in the shade of a small tree, he discovers something genuinely exciting: a brand-new litter, guarded by a sluggish but protective Red Wattle sow. There are thirteen piglets in all, a huge litter. But most of them, it turns out, are red. Only a couple have brown stripes; over the course of the next few months, these pigs will turn black.

Barton’s name for the black pigs is “Texas Roar”—the second word is a portmanteau of “Red Wattle” and “boar”—and he got to name them because he more or less created them. Barton has always loved the flavor of the Red Wattles that he raises and of the Texas wild boar that he hunts. Why not combine them? thought he and his partner, Carolyn Tanis. “We wanted to put the two flavors together,” he says. So about eighteen months ago, Barton placed four Red Wattle sows in a 67-acre area where he had fenced off some boars a few years earlier. On April Fools’ Day, he spotted the first brown-striped piglet in the enclosure.

The Roar is a fifty-fifty mix but all Texan; the Red Wattle was thought to be extinct before being rediscovered in East Texas in the seventies. For now, this new offspring is considered a crossbreed, and most of the piglets look like any other Red Wattle. But within a few generations, Barton hopes to isolate sows and boars that will consistently pass their traits on to their offspring. Once that happens, the Roar could become the first new Texas hog breed since the Red Wattle.

The Roar pigs may look like both of their parents, but they get their eating habits from their fathers. Rather than clamor for the carefully engineered diet of the Red Wattle, they are, early on, foragers. “They range free on sixty-seven acres covered in acorns,” Barton says. Though they too eventually move to the engineered diet, the early foraging gives their fat a unique flavor. And they’ve got plenty of fat.

Which is why chef David Uygur, of the Dallas restaurant Lucia, is waiting patiently for his next shipment of Roar. Uygur enjoys the flavor of wild boar, but it can be a tough sell to some customers. “It’s very lean,” he says. “But crossing the boar with the Red Wattle has solved that problem. The fat cap on top is as good as a Red Wattle of the same size, and the quality of the fat is just as good.” For years Uygur has received a Red Wattle hog every couple of weeks from Indian Mountain Ranch, which he uses to make Lucia’s much-lauded salumi. He received his first Roar hogs a few months ago and did the same with them, with “gamier” but still delicious results. Because of the limited supply, he’s the only chef getting any Roar hogs for the foreseeable future.

Uygur takes some pleasure in the fact that though the Roar has the fat profile of the Red Wattle, it retains the morphology of the wild boar. He describes the hog in terms anyone raised on Looney Tunes can understand. “Picture one of those cartoon bulldogs with all the weight up front and tiny little legs in back,” he says. “It’s kinda like that.” 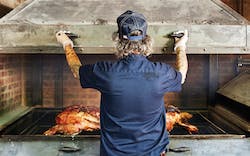 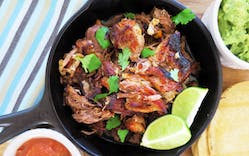 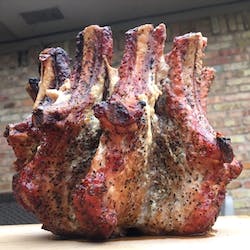 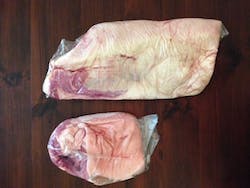