Before becoming a national Thanksgiving novelty, the deep-fried turkey was a simple meal developed in bayou country, the region stretching from southeast Texas to southeast Louisiana. “People out there already owned big stockpots for crawfish boils, so of course they began thinking, ‘What else can I stick in here?’ ” says Charles Clark, who grew up along the Sabine River and now owns the Houston restaurant Ibiza. But before you drop a big bird into several gallons of bubbling peanut oil, remember that careless cooking could result in an appearance on the local news. So buy a turkey that weighs no more than 12 pounds and let it fully defrost (bad things happen when ice hits oil). Then determine how much oil to use: Place the raw turkey in your pot, fill it with water until the bird is covered by 2 inches, pull out the turkey, and mark the waterline.

Melt a stick of butter in a pan with 1 tablespoon of a Cajun spice blend (Clark prefers Tony Chachere’s). Fill a flavor injector and shoot the seasoning into the breast, thigh, and wing meat at various angles to distribute the marinade. Skewer the turkey on a perforated poultry rack.

Establish a safe frying space: Place the propane burner on a clearing or concrete slab away from your house and declare the area a no-kids, no-pets, no-nosy-neighbors zone. Plant a chair a few feet from the pot. Clip a thermometer to the pot’s lip and pour in the peanut oil to the marked line.

Light the fire, bringing the oil to 350 degrees. Put on a pair of heavy-duty gloves, hang the skewered turkey from a grab hook, turn down the flame to reduce spatter, and slowly immerse the bird into the heated oil. “It’s like putting your foot into a hot bath,” Clark says. “Lower it an inch or so every ten seconds.” Readjust the flame to maintain a temperature of 350 degrees. Cooking time should be about 3 1/2 minutes per pound.

Turn off the gas, then remove the darkened, crispy turkey from the pot and place it on a newspaper-lined pan. Wait about 10 minutes, then carve the meat. Commence gobbling. 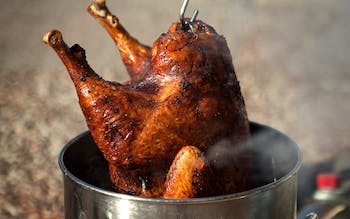