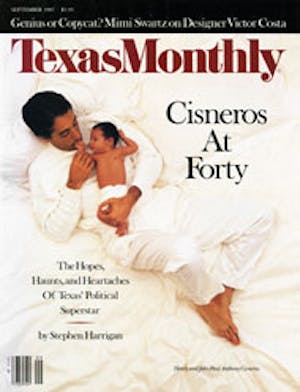 To unregenerate meat and chicken slobs like myself, seafood has always seemed as mysterious as Sanskrit and about as appetizing: Either it has no taste at all or it tastes as if it has been cavorting with, well, other fish. That was my opinion until recently, when I was handed a copy of Austin chef Ann Clark’s new cookbook, Fabulous Fish (New American Library Books, $17.95). Clark’s stated goal is to demystify seafood, and she has succeeded brilliantly. Under her direction, the process is an adventure as uncomplicated as flouring and frying a chicken-fried steak.

Clark—who is also the director of Austin’s La Bonne Cuisine cooking school—lays out her techniques and recipes in a readable, easy-to-follow style. The scatterings of trivia that appear throughout the book’s 274 pages are more fun than a party game. How many of you know, for instance, that capers are the flower buds of a Mediterranean bush or that they taste great fried and sprinkled over sautéed fish? Other gems abound, such as methods for roasting peppers, cleaning squid, or whipping up a hollandaise like champagne sabayon to serve over spinach-wrapped poached oysters.

Some cookbooks seek to hide the delicate flavors of seafood. They tell you to roll the creatures in cornmeal and deep-fry them or to entomb them in rich sauces of cream and butter. Let’s face it: Even cardboard tastes passable with those treatments. What Clark’s innovations succeed in doing is to enhance the fragile, elusive flavors of seafood with sharp, clean seasonings like fresh cilantro, peppers, and mint or with more exotic ones like lemongrass, ginger, and fruit juices.

Without being pedantic, Clark tells the reader everything worth knowing about seafood: what fish to buy, how to buy it, how to season it, and how to cook it. A lexicon describes the flavor, texture, and appropriate seasonings for any fish available in these parts, and one section informs us which sea creatures are lean and which are fat. Fat fish is more flavorful than lean fish, Clark says, and yet the fattest fish is still leaner than the leanest cut of beef or pork. What’s more, the omega 3 fatty acids that are found in seafood can help to reduce cholesterol levels and lower blood pressure.

Other tips that Clark gives can change the way you shop for fish. For example, we all know what the fishmonger will answer to the question, Is your fish fresh? Ask instead when the fish arrived at the market and from where. Ask if the fish has been frozen. Touch the glass surface of the display case to make certain it is icy cold. Sniff your prospective purchase to detect any “fishy” odor or hint of ammonia, which suggests deterioration (the exceptions are shark and skate, which do have a natural ammonia smell). Live lobsters and crabs should be rejected if they do not snap shut when tapped.

Scorning the boring boiled potato, Clark includes instead a chapter on her favorite fish accompaniments, such as bulgur with lemon and pine nuts or buttermilk-pecan biscuits. There is also a chapter on marinates, sauces, flavored butters, court bouillons, and other culinary cosmetics, as well as a section describing the properties and uses of hers in fish cookery. Clark suggests using both fresh and dried herbs in the same dish, the dry herbs at the beginning of the cooking process and the fresh one near the end.

In sampling the recipes, I avoided the butter sauces, though I was intrigued by such offerings as sweet butter mixed with chopped chives, grated lemon rind, white pepper, sour cream, and caviar. I did sauté (one minute on each side) thin filets of tuna marinated in a blend of orange juice, minced ginger, grated orange peel, sesame oil, rice-wine vinegar, and soy sauce. The result was exquisite, and in making the dish I discovered a wondrous contradiction at work: While seeming to disguise the fish (a step that I heretofore had considered necessary and proper), the marinade actually forced the catch of the day to reveal itself and set off the fish’s flavor to best advantage.

After a couple of experiments, I put Fabulous Fish to the supreme test—a sit-down diner for eight gourmands, none of whom were professed seafood lovers. The menu consisted of grilled shrimp in spicy Malaysian coconut sauce, fish soup with corn and yellow squash, oyster-Parmesan popovers, Thai squid salad with hot green chiles and mint, and Southwestern-style crab cakes with lime and chiles. The coconut sauce was a bit bland for my guests, and the soup, though delicious, was too heavy for such a large meal. To my surprise, the squid salad was the most popular item, followed closely by the crab cakes. What raised the lowly squid to nobility was the liberal application of fresh lime juice, Vietnamese fish sauce, minced garlic, red onion, scallions, lemongrass, mint, cayenne pepper, cilantro, and serrano chiles. Since Clark does not discourage experimentation, I tripled the suggested amounts of cilantro and serranos. The cooling, pungent taste of the cilantro offsets the sting of the chiles without canceling their unmatchable flavor.

I was particularly apprehensive about cooking popovers, but I shouldn’t have been. I just followed Clark’s recipe and watched the batter swell and engulf the oysters, which reappeared as though by magic when the rolls were pulled apart.

Each course was greeted by repeated toasts to my culinary skills and raves from my guests. I humbly acknowledged that I had a little help.