Somewhere deep in the innermost regions of the American character there may dwell The Perfect Hamburger, the mold, the essence, the Platonic ideal. Here among us mortals, however, there can be no doubt of the identity of the perfect hamburger: it is mine. Mine. MINE! Well, you get the picture. In this age of post-Watergate good feeling, there is perhaps no easier way to start an argument than to advance the merits of one hamburger over another. Now since the hamburger is, ultimately, a (ahem!) trivial affair, differences of opinion over its merits tend to reveal more about the eater than the eaten. Here, then, is what certain prominent Texans consider to be the ideal hamburger.

George Bush, currently the director of the Central Intelligence Agency, admits to serving “a pretty mean hamburger every Sunday at our house. I do the cooking, but when the going gets tough, I can press some of our kids into service if they’re home.” In his full disclosure, Director Bush insists that the most important ingredient in any hamburger is a good grade of beef, basing this on his theory, “Let the meat do the talking.”

T. A. “Amarillo Slim” Preston’s hamburger is also heavy on the meat. At the home of the former World Poker Champion, the meat not only does the talking, it also does most of the ruminating in his back yard, where Preston—taking no chances—raises his own beef. Al­though not a hamburger eater by nature, when Slim does indulge, it’s in a charcoal-broiled hamburger made at home with a regular bun, a lot of meat, mustard, onion, lettuce, and tomato, but no mayonnaise. “Mayonnaise is for sandwiches; that’s just factual.”

Many men share Preston’s dislike for mayonnaise, including Marvin Zindler, Houston’s con­sumer advocate at KTRK-TV; Zindler is also a meat man. So much that he likes his hambur­ger raw. Not rare, folks, raw; at the outside he’ll accept it slightly warm.

Kaye Northcott, editor of the Texas Observer, would wince at the sight of a Zindler-burger. Kaye is on her way to becoming a vegetarian. However, during infrequent lapses—usually dur­ing deadline time—she has been known to eat a good, old-fashioned hamburger at Dan’s on South Congress. Cheese, mustard, lettuce, and tomato are essential to her hamburger, but not as essential as the greasy onion rings.

Richard “Tres” Kleberg’s nonchalance about his creation, the no le hace hamburger (roughly translated, the “it doesn’t matter” burger) is deceptive. When it comes to hamburger, what clearly does matter to the King Ranch heir is what goes into its making. His butcher grinds sirloin and forms it into five-inch patties, which Kleberg considers the ideal diameter. Kleberg marinates the meat in a sauce of his own invention, which keeps the meat moist on the grill. His favorite condiment: a spoonful of picante sauce.

Tony Valone of Houston’s posh Tony’s restaurant does not feign indifference to hamburgers. Tony has to be in “a hamburger mood” before he’ll put a burger to his lips. Such a mood is generally triggered by external forces. When his kids play softball in the park, some­thing—nostalgia, maybe—sets off Tony’s hamburger reflexes and he’s off to Ruby Red’s or Whataburger. Valone, for the record, subscribes to the cut-the-mayo school of hamburgers.

Not so, Lila Cockrell. San Antonio’s mayor likes her hamburger with everything, mayonnaise included, with a side of french fries and onion rings. Her diet demands, however, oc­casional moderation: skim milk instead of a chocolate shake and only half the bun on the hamburger. Compromise. We live in a world of compromises.

Jethro Pugh, Dallas Cowboys defensive tackle, orders a hamburger from Guy’s Drive-In during the season to break the monotony of training food. Pugh’s ideal is a fat, juicy prime meat patty, medium well done, on a toasted, seedless bun, with sliced onion and tomato, a leaf of lettuce, and mayonnaise. Add a cold beer in a bottle and baked beans and the meal, ac­cording to Pugh, approaches perfection. It may not, but who’s going to argue with him?

What follows are six more Texans who consented to let everyone in on their preferred ham­burger. Along with an occasional slice of onion, or tomato, these six photographs also provide a slice of life that is peculiarly Texan. As Judy Garland, once told a Cairn terrier, “We aren’t in Kansas, Toto.’ 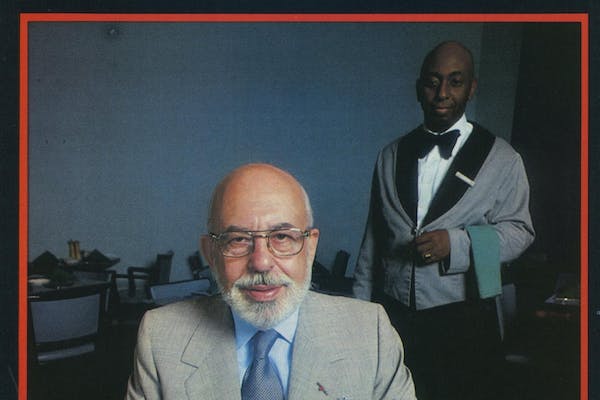 Stanley Marcus doesn’t eat hamburgers just anywhere. When Stanley Marcus dines on hamburger it’s at Neiman-Marcus’ Zodiac Room in Dallas. There alone he knows what he’s getting—it’s his store, after all. He orders a Beefarama: a choice beef patty (20 percent fat) stuffed with cheddar cheese and diced green onions and capped with a fresh mushroom and the tiniest dab of relish for sweetness. Elegant, but with a measure of restraint. No bun, no mayonnaise, mustard, or other condiments. Stanley Marcus’ constant diet does not allow such greasy extravagance. Maybe just a dash of Worcestershire and an occasional side dish of cottage cheese. Black coffee or wine —a J. Thorim Royal Beaujolais 1973, for example, expertly poured by Alvin Crayton. 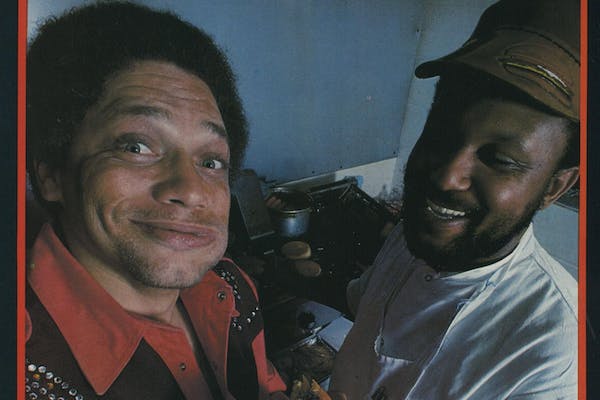 Cab’s is probably not a place that would tempt Stanley Marcus. Then again, what would Stan­ley Marcus be doing in southeast Houston? State Representative Mickey Leland knows, how­ever, that the burgers he likes are cooked on the grill of Clarence M. Calloway. At Cab’s, Leland gets a thin hamburger patty, medium well done, on a toasted sesame-seed bun, with lettuce, tomato, and mayonnaise, with a pat of melted yellow cheese on top. To complement the master­piece, he adds some barbecue-flavored potato chips (no wrinkles) and a milk shake (not a malt). Leland loves chocolate on principle, but—alas—it does not agree with him. He drinks strawberry or vanilla shakes instead. 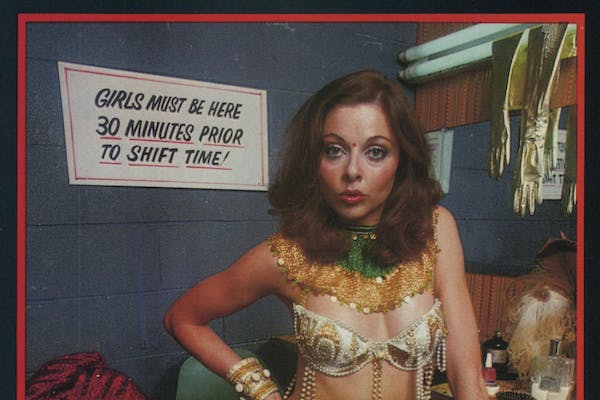 Belly dancer Chastity Fox prefers her own creation (a Foxburger, of course). She puts a dash of onion or sassafras in the meat, fries it rare, and perches it on a grilled bun—mayonnaise on top, mustard on bottom. It must have Ortega green chiles. Mexican white cheese, a thin slice of onion, thin slice of tomato, and a very crisp leaf of lettuce. At home, Chastity would also have pickles from Simon David in Dallas, or a bowl of homemade jalapeño pinto beans. Since the only place she eats french fries is the Lo Boy on Highway 287 on the road to Wichita Falls, she usually makes her own or goes without. 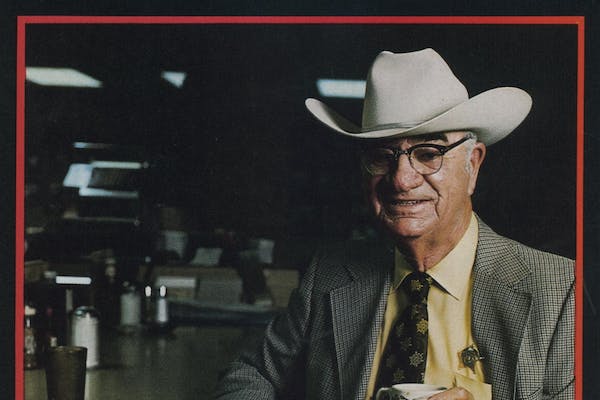 Fayette County Sheriff Jim Flournoy’s hamburger reflects his no-nonsense attitude toward just about everything; it’s basic. And as you would expect of a larger-than-life lawman, he likes his hamburger on a JUMBO bun with tomato, onion, lettuce, and pickles, but definitely cut the mayo. On the side, he takes french fries, with, naturally, ketchup. You might find Sheriff Jim lunching at Frank’s Place in Schulenberg, or closer to home, here at La Grange’s Cottonwood Inn. He drinks a cup of black coffee with that hamburger while he chews the fat with the boys. 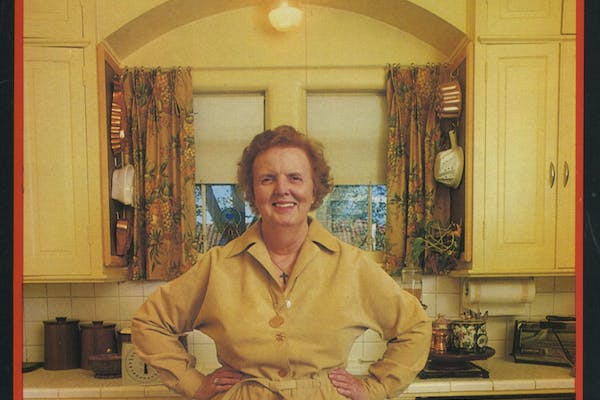 Culinary expert Helen Corbitt prepares her hamburger from ground beef bottom or top round, with salt, pepper, and hard butter mixed in with the meat. Cracked ice is also de rigueur; it keeps the meat moist. A bit of butter, Roquefort cheese, and chopped parsley replace ketchup and other culinary condiments. All this is placed on a toasted, homemade bun. Ms. Corbitt drinks hot tea and usually has a side dish of cole slaw or a fresh vegetable salad. 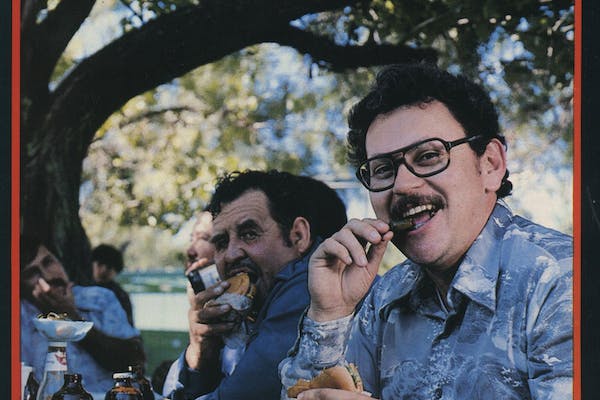 José Angel Gutiérrez, the founder of La Raza Unida and the County Judge of Zavala County, is a man of strong beliefs, particularly about getting a good hamburger. First, one is required to drive to La Pryor to My Hamburger Stand, which is actually Concha and Esteban Najera’s hamburger stand. Concha grinds sirloin for the meat used in José Angel Gutiérrez’ favorite hamburger, shared here with Esteban. She adds fresh lettuce, tomato, and onion to a small, seedless, hot-off-the-griddle bun—mustard on top and bottom. With Concha’s hamburger, José Angel likes to eat “a giant jalapeño pepper” and drink a can of Falstaff (he is the local distributor).