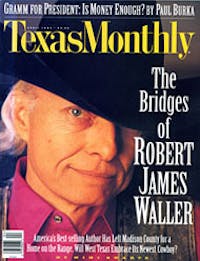 In the restaurant world, obscurity is the mother of invention. Something about having no expectations except one’s own seems to start the creative juices. Perhaps that is why some of the best food in Texas these days can be found at two upstart spots in Houston and Dallas, where inventive young chefs have generated the kind of buzz that signals something extraordinary. At Houston’s Daily Review Cafe, in a converted newspaper office not far from downtown, Claire Smith is melding Mediterranean basics and complementary ideas from American and Mexico. At the Green Room in Dallas’ arty Deep Ellum district, Christopher Pyun is refining what he calls alternative cuisine—a simple but classy and intensely flavored spin on modern French cooking.

In business for four and nine months respectively, the two prodigies have more in common than appearances suggest. First is a solid classical education: Smith and Pyun can clarify butter and reduce a sauce with the best of them. Second is an uncanny instinct for combining tastes and textures. Third is a sense of culinary adventure and a willingness to break with the status quo. Many Texas restaurateurs seem mesmerized by Southwestern cuisine, and indeed it remains a vigorous force: Mark Miller of Coyote Cafe and Red Sage fame is set to open a restaurant in Austin at the site of the now-defunct 612 West. But Pyun and Smith see Southwestern cuisine as one influence among many, ranking chiles and cilantro as no more of less important than caviar and couscous. What matters most to them is cooking food they like and making their customers happy.

A first-time visitor to the Daily Review would be hard-pressed to explain its cachet. The environs are hardly auspicious: Anonymous apartment buildings and run-down frame houses cluster higgledy-piggledy around the restaurant, which is tucked in to the front of a sprawling old building that was once home to the Daily Court Review. Upon hearing the address—West Lamar and Dunlavy—even native Houstonians are apt to say, “Huh?”

Yet on a nippy February afternoon, a Lincoln Town Car noses purposefully into the parking lot, and two well-coiffed, Gucci-clad matrons emerge. They have obviously been here before, and they seem perfectly at ease. So does the crowd of casually dressed, youthful customers inside who are finishing up lunch. And, for that matter, so does the fresh-faced young woman in a T-shirt, rolled-up pants, and sandals who is sitting on the steps outside, chatting on a cordless phone. At the tender age of 29, Claire Smith is the powerhouse behind this improbably situated, improbably sophisticated, and improbably successful enterprise.

“Oh, I’m not a very good interview,” she protests, struggling to describe the distinctive, delicious food that she creates in a kitchen too small for most suburban houses. “What I cook is sort of rustic and comfortable,” she finally says. “I have a lot of experience in Italian and Spanish and French cooking, so I do a mixture. Occasionally I’ll do a little Southwestern—oh, plus some American favorites, like chicken pot pie.”

If any single item has come to typify the Daily Review’s reasonably priced menu, it is Smith’s chicken pot pie. It embodies one hallmark of her cooking: the ordinary dish raised to gourmet status. In her hands, the pastry staple of cafeteria lines and freezer shelves achieves a cosmopolitan quality. The well-browned pastry is crisp, the chicken moist and chunky, but what makes it special is a touch of fennel, which is shot through the creamy filling.

Another hallmark of Smith’s cooking is the inspired interplay of ingredients. Take, for example, her baked goat cheese appetizer: assorted greens, pecan halves spiced with cayenne and brown sugar, lightly grilled Granny Smith apples, and a golden disk of breaded goat cheese. Layer his bounty on substantial slices of grilled bread and some mysterious synergy among the ingredients transforms the whole into something far greater than the sum of its parts.

Smith’s makeover of the standard Mexican chile relleno exemplifies another facet of her style: a bold culinary multiculturalism. A teardrop-shaped poblano chile is stuffed with a California-style combo of mild goat cheese, chicken, and sweet caramelized onions. The texture is punched up by pine nuts, the flavor enhanced by a silky romesco cream sauce with ancho chiles, roasted red peppers, ground hazelnuts, and balsamic vinegar. Best of all, instead of the usual listless flour-and-egg batter, the pepper is dipped in a stout corn flour batter before it is fried, making it as crunchy and homey as any fried catfish—and much better looking.

Smith, who grew up in Houston, had worked for caterers and restaurants before she entered Rice University and knew that she wanted to be a cook. “But I made this deal with my parents that first I would get a degree,” she says, and she did—in art and art history. Then she enrolled in San Francisco’s California Culinary Academy and interned with a series of chefs. Two influences stand out. “I worked a lot a Greens, a well-known vegetarian restaurant that is connected with the San Francisco Zen Center. But most of my style comes from Oliveto in Oakland. All the head chefs there had cooked at Chez Panisse, Alice Waters’ acclaimed Berkeley restaurant.”

After six years, Smith was itching to start her own place. “But San Francisco was restaurant-saturated,” she says, so she moved back to Houston. While working in a lab at the Baylor College of Medicine, she was introduced to Carl Eaves, who had moved from Los Angeles to start a coffee shop in the old Daily Court Review building. When that deal fell through, he paired up with Smith. “We worked furiously for six months,” says Smith, “starting with basically a shell, and not a very attractive one at that.” Eaves had experience in decorating in his native England and did much of the design, which is a takeoff on fifties funk: a pea-green-and-purple color scheme with touches like a glossy birch bar front and concrete tabletops.

Despite the peculiar neighborhood—or maybe because of it—the restaurant has been packed from the minute it opened. Even today, Smith barely has time to enjoy her success. “It’s completely different when you own your own place,” she says. “You have to be there all the time and care one hundred percent. Maybe a year from now I’ll have a day off.”

The Green Room in Dallas has a signature soup—literally. Order it and your server sets before you a bowl filled with a creamy purée of roasted red bell peppers, the word “room” written across it in a green jalapeño coulis—get it? The wordplay duplicates the visual pun of the restaurant’s sign: the word “room” in blocky green neon letters.

All that may seem just too in-groupy, but ever since the Green Room opened last July 1, it has been attracting everyone from Deep Ellum habitués to staid Park Cities residents. The bar up front is typically filled with a crowd of beer-swilling youngsters in ripped jeans, but most visitors to the quirky saffron-yellow dining room—with its trompe l’oeil arches and gilded cherubs—come to eat, and eat well. They know that Christopher Pyun’s menu is one of the best and most affordable in the city.

“Simplicity is my first rule,” says thirty-year-old Pyun, who looks like he just graduated from college. “I try to never use more than five main ingredients, not counting seasonings and vinegars in the sauces. I’m not interested in cooking a dish where you’re not sure what you’re eating. In my food, you taste all the ingredients separately.”

An example is Pyun’s peppered pork tenderloin appetizer, a lush composition of thin-sliced pork and grilled shiitake mushrooms topped with a salad of mixed greens and herbs glistening in porto oil—a reduction of port wine with olive oil. “First,” he says, “you get the spiciness of the pepper and the sweetness of the oil. Then, all of a sudden you’re tasting the herbs in succession—it’s like, wow, there is the oregano, and, oh, there is the mint.” Just as tasty is Pyun’s lobster ragoût with navy beans and asparagus in a lobster stock reduced with mint leaves. Because the dish is not swamped by ingredients, the marvelous affinity of lobster for asparagus shines through.

Intensity is also a mainstay of Pyun’s kitchen ethic, what he calls “taking time to do things right.” His veal sauce is cooked down for 36 hours to concentrate its flavors, and the tomatoes and onions for his tomato sauce are simmered for more than an hour. “Onions have natural sugars, and the way to bring them out is slow cooking,” he explains.

Pyun, whose mother is American and father is Korean, grew up in Cheshire, Connecticut. He majored in history and political science at the University of Rochester in upstate New York, but he spent his evenings and weekends working in restaurants and with a catering company. After graduation, he studied at the Culinary Institute of American, in Hyde Park, New York; while there he landed a job at Le Cirque, the celebrated Manhattan restaurant then run by chef Daniel Boulud. “Daniel screamed and yelled and threw things, but he forced you to be perfect all the time,” he says. Over nine months, Pyun honed his techniques and worked with produce and spices from all over the world.

After that, he moved to other New York venues, then became executive chef at a restaurant in Indianapolis. It was there, last year, that he got a call from a college friend, Whit Meyers. Meyers was opening a restaurant in Dallas and wanted Pyun’s advice on a cook.

Meyers offered him a piece of the business and carte blanche in the kitchen, and Pyun moved to Texas. “We’ve been going full-bore ever since,” he says. “To come down here and say, ‘This is my food and nobody else’s’ was quite intimidating,” he admits, though the positive response has made him less edgy. “All the recognition has been great, but for me personally, what matters most if seeing people enjoy my food. When someone walks in the kitchen and says, ‘Hey, that was a wonderful meal,’ is makes me feel great.”