In a truly horrifying update, Taco Cabana is now serving a pumpkin spice margarita. If this is what it takes to get the beloved Tex-Mex chain through the pandemic, we’ll let it go. But this is as far as we’re going.

San Antonio’s Mixtli served its final meal in its original freight car location. The modernist Mexican restaurant will reopen in a larger space in San Antonio’s Southtown this winter.

In more Mixtli news, co-owners and executive chefs Rico Torres and Diego Galicia are expanding with a new concept, Kumo. It’ll be a Mexican-Japanese omakase spot, following a trend set by Irving’s Edoko Omakase and Dallas’s La Resistencia. Kumo will open on November 4, and reservations are now open.

José executive chef Anastacia Quiñones-Pittman has teamed up with Sloane’s Corner in Dallas to create a queso fundido pizza. It’s available only at the Pizza Leila pop-up inside Sloane’s Corner for the month of October. A portion of proceeds benefits the American Parkinson Disease Association.

The Dallas Morning News wants to you to vote for your favorite Tex-Mex restaurant. Currently in the lead with nearly 28 percent of the vote is Gabriela & Sofia’s Tex-Mex. 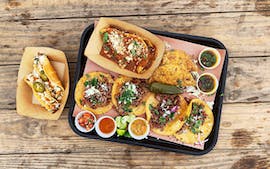 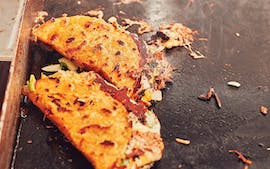 PETA named Dallas’s Nuno’s Tacos and Vegmex Grill to its list of the top ten Latinx-owned vegan restaurants in the nation.

Vaquero’s Texas Bar-B-Q sold out of smoked barbacoa de cabeza in just fifteen minutes at this past Sunday’s pop-up at Hop & Sting Brewery. Owner Trey Sanchez might make the dish a weekly offering.

Magdalena’s Supper Club in Fort Worth is returning for prix fixe dinners on October 30 and 31. Reservations are open.

Maestro Tacos is expected to open next month in Fort Worth’s West Seventh district. Founder Miguel Mendoza is a former butcher and taquero from Monterrey in northern Mexico—a region whose cuisine is reflected on the menu. There will be trompo, barbacoa, and birria, as well as a cocktail program based on agave spirits.

These are so rad! Go follow @buckandcoyotes for more crazy shoes. (These are 7.5, y’all lucky, I was about to snag em!). #fortworth #vans #elchuco #shopsmallbusiness #supportlocal #madeintexasbytexans

Nixta Taqueria in East Austin celebrated its first anniversary by hosting a series of guest chefs and pop-ups, including Comadre Panaderia and the Taco Mafia.

As part of its ten-part series on how restaurants are weathering the COVID-19 pandemic, the Austin American-Statesman interviewed El Naranjo co-owner and executive chef Iliana de la Vega. “We’ve been disappointed with the government’s lack of empathy and support for small businesses and independent restaurants,” she said. Maritza and Reyna Vazquez of Veracruz All Natural also gave interviews.

Maria’s Taco Xpress, an old-school Austin favorite, will close at the end of this year. The land it sits on has been sold to an unnamed developer.

Berlin newspaper Der Tagesspiegel writes about a new taqueria in the German capital, and feels compelled to name-drop our taco editor. We’ll take that over a pumpkin spice margarita any day.

Houston’s modernist Oaxacan-inspired Mexican restaurant, Xochi, has reopened.
It had been closed since the pandemic hit in March.

La Esquina was broken into several times this weekend. Can you help identify the suspect on the video posted to the Houston taco truck’s Instagram page?

JQ’s Tex-Mex BBQ is opening a kiosk in Politan Row, a food hall in Houston’s Rice Village. Pitmaster-owner Joseph Quellar says the move from weekend pop-up to physical space comes thanks to the success of his beef birria: “[He] credits an article by Texas Monthly taco editor José Ralat for taking the movement from underground sensation to a mainstream dish that’s suddenly on menus everywhere across Houston and beyond.”

There is a new taco book on the scene. How to Fold a Taco, by Emmy Award–winning journalist Naibe Reynoso, is a bilingual children’s book that includes whimsical illustrations, a recipe, and a lesson on taco history.

Big Kids, a new nostalgia-themed sandwich shop in Chicago, is offering a fine-dining homage to the Taco Bell Crunchwrap Supreme. “The menu dives into the ’90s Trapper Keeper notepad aesthetic with three-eyed mutant smiley faces and that pointy “s” logo that everyone used to doodle on notebook covers.”

Nearly 77,000 Taco Bell fans have signed a Change.org petition begging the chain not to eliminate Mexican pizza from its menu. Mashed.com explains why the dish is so beloved by the South Asian community.

The New York’s birria scene is taking off…

In case you missed it, Sunday, October 4, was National Taco Day. To celebrate, competitive eater Joey Chestnut ate a lot. The headline says it all: “Joey Chestnut Eats 12-Pound Walking Taco In 38 Minutes.” (A “walking taco” is what you get when you mix taco ingredients into a bag of Fritos or Doritos.) Problem is, that’s not a taco. Americanized Mexican food, yes. Taco, no.

Yours truly was a guest on the Smart Mouth podcast.