Shortly before noon on Sunday, dozens of guests began streaming into Bubba’s Texas-Style Bar-B-Que and Saloon, a restaurant that serves up exactly what the name suggests out of a two-story building in a quiet residential neighborhood in Shanghai, China.

“Happy Fourth,” Ken “Bubba” Walker said, extending a thick hand to one of the expats who comes here each July to celebrate America’s Independence Day. “Grab yourself a beer and a plate of food.”

A crowd of about a hundred people filled Bubba’s throughout the afternoon, with new faces arriving just as others returned to their business in China’s largest city, giving it a vibe much like the family cookouts and neighborhood parties that would be breaking out all over Texas the next day, when the Fourth kicked off on the other side of the globe.

People spilled out onto a wooden patio, where a two-piece band from Nashville played Garth Brooks songs. Shaded tables were lined up on the driveway, a respite from the fierce sun (though, just like in Texas, nothing could combat the sticky humidity). Out front, near the sidewalk that runs alongside Hongqiao Road, Walker, clad in jeans and a blue, short-sleeved dress shirt, nursed a beer and worked a 50-gallon smoker filled with chicken quarters slathered in barbecue sauce made from his own recipe involving “the usual ingredients,” imported from back home.

The Austin native’s accent has been dulled by a decade living in Shanghai, but he still self-identifies as a Texan rather than an expat. A décor that favors the Texas flag over the U.S. one by a ratio of five-to-one really drives home his state pride.

Walker graduated from Texas State University and spent the nineties working as a corporate marketing consultant in Hong Kong. A few years after the millennium turned, he moved back home to Austin, but soon realized he missed life in Asia. He moved to Shanghai just over a decade ago, but this time he brought one of his favorite pieces of home with him.

“At the time I couldn’t say that there was a place in all of Asia that made real, slow-cooked barbecue,” he said. So Walker rectified that; he opened Bubba’s in 2006, a Texas-style barbecue joint. For a time, his business included two other locations near Shanghai, but development issues and a slowdown in China’s economy prompted him to re-focus his efforts on the original restaurant, which he runs full-time.

“Business is steady but prices are rising, which makes it a bit tougher to turn a profit,” Walker said. “Let’s just say I can still afford my annual trip home to Texas, but it’s sure not the same as when I had a corporate expense account.”

Walker told me that China’s slowing economy has also changed his customer base slightly, with more Chinese diners coming in to take the places of expats sent home by international corporations looking to cuts costs on China operations.

“I think a lot of the locals were too intimidated to even walk through the front door back when it was wall-to-wall foreigners, drinking and acting rowdy,” he said. “Now Chinese customers account for about thirty percent of our customers where it used to be just ten percent.”

Still, he told me, it can be tough to convince Chinese customers that his Australian Wagyu burgers are worth paying more for than one from McDonald’s. “From their perspective, a burger is a burger.”

Burgers and hot dogs continued to roll off the grill in waves, and plates were also filled with Walker’s smoked chicken quarters, and sausages. Out back a Louisiana native kept a close eye on a 30-gallon crawfish boil brimming with links, fingerling potatoes, and corn on the cob.

Inside the saloon, Tim Wakowski and Chris Harrison drank Japanese beers while watching Chinese baseball on one of the bar’s several flat-screen televisions. Wakowski works in plastics and Harrison in auto parts, and both were sent to Shanghai by their respective companies to help setup manufacturing facilities.

“Being able to come to a place like this helps a lot when you get home sick,” Wakowski said.

“This is Americana right here,” Harrison added. “It may not be home, but with good food, good drinks, good people from all walks of life, it’s almost like a normal afternoon back in America.”

Wakowski lived in Kemah, Texas, for five years and Harrison told me he has family in Junction, but after “Bubba” Walker himself the first native Texan I met was Connor Frankhouser, from Ballinger. Frankhouser, who wore jeans, snakeskin boots, and a cowboy hat, said he moved to China ten months ago after graduating from Angelo State University.

“I woke up one day and thought to myself that there must be a lot of opportunities in China, so here I am,” Frankhouser said. “I’m an English teacher so I get to tell all the kids how to say ‘y’all’ and ‘howdy.’”

Frankhouser and his roommate, who also went to Angelo State, said they first came to Bubba’s to compete in a chili cook-off back in November.

“We made our chili with chicken but after I got a few beers in me we started telling people there was venison in it,” Frankhouser said. “They’d say ‘oh! I can taste the venison!’ It was a good time, though, just like a tailgate party back home.”

Walker’s annual chili cook-offs and barbecue contests began as branding exercises for his restaurant, a natural outlet for skills he picked up when he worked in marketing. Now the fierce competition draws crowds of about 1,300 people each year. In 2012, Bubba’s sent its winning team to the Terlingua International Championship Chili Cook-off.

The band played on until the early evening, when a light rain started to thin the crowd. Those who stayed ran for cover and consoled themselves with crawfish and conversation about life in China and life back home. Children played with miniature American flags, while parents showed off dresses, t-shirts, and shorts bearing its image. As the evening wound down, Walker confessed to the problems that patriotism alone couldn’t solve. Lone Star beer, for one, could not be had in China, even if Bubba’s proudly displayed several of its signs and advertisements. And there was something else.

“Because I’m using Australian beef I just can’t do brisket here the way I can back home,” he told me. “It’s just not the same as U.S.D.A. beef, which you can’t get in China—at least not until Trump becomes president.” 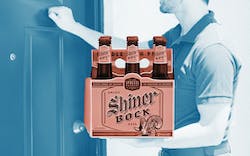