For almost twenty years, chef Jason Dady has been a culinary force in San Antonio, where his Jason Dady Restaurant Group runs six restaurants—Shuck Shack; Tre Trattoria, at the San Antonio Museum of Art; Range; Two Bros. BBQ Market and its sister, Alamo BBQ Co.; and B&D Ice House—as well as catering and event services. In February, he opened his first restaurant in Austin, a casual taco and margarita joint called Chispas on West Fourth Street. At the end of April, the busy chef will return to the Austin Food & Wine Festival (tickets are still available here).

For the second installment of our new series, the Texan Food Diaries, Dady tracked what he ate over five days in March as he made the rounds in both San Antonio and Austin (he had just opened Chispas three weeks earlier) and found a little time to relax with friends and family on an annual camping trip.

Breakfast: We wake up every day at 6 a.m. and get the kiddos going. It’s my favorite time of day, getting breakfast ready for them—they had fried eggs and toast—although I’m not much for breakfast myself. We hit the door running by seven to make it school on time. Three kids, three different schools; it’s always an interesting morning. The car ride is always a dance party, laugh fest, and something that kick-starts my day.

Lunch: I worked in our catering kitchen this morning, checking with our team for our upcoming events. I knocked out our prep and to-do lists and had to run to Range to check on lunch service. I decided to walk down the street with Margeaux Alcorta, my director of culinary operations, to Playland, chef Stefan Bowers‘s new pizza joint. The crust, made with a sourdough start, is the best in town. We went with the Ancient Flavors pie (marinara, dried oregano, pecorino, and anchovies), which Bowers had posted on Instagram, making me crave anchovy pizza. We also got the pepperoni and jalapeño pizza, an all-time classic. It was the perfect lunch—we were in and out in 45 minutes.

Dinner: I came home early today to pack for our upcoming camping trip. I had been saving two twenty-ounce Snake River Farms NY Strips, and this was a great night to sear them up and enjoy dinner with the family. Just needed to add a bottle of chardonnay and a quick vegetable of sauté of broccoli, onion, and sweet peppers. These steaks were UNREAL. So tender, so flavorful. By using just a simple cast-iron pan, kosher salt, and black pepper, we let the meat speak for itself and rightfully so.

Breakfast: Nada for me today.

Lunch: After making my rounds to a few of the restaurants and helping Two Bros. BBQ Market install a new oven, I was near the airport and close to one of my favorite little taco joints, Los Balito’s (formerly Los Robertos). I sat down solo and ordered the Number 10, a combo plate of chile relleno and crispy beef taco. They use a shredded braised beef for their taco, and it’s small, concise, and CRISPY. A dream combo.

Dinner: I had to make a quick trip to Austin to drop off a few things at Chispas, so I sat with our chefs and ordered our large-format nachos. The $30 Grande Nachos Supreme feeds eight people, and we wanted to make sure that it was well balanced and had appropriate garnishes. Topped with barbacoa, duck confit, and carne asada, the nachos hit the spot, along with a frozen paloma.

Late night: I picked my daughter up at 10 p.m. from volleyball practice in Boerne, and it’s a ritual to cook some kind of ramen dish when we get home. Tonight was a “fried rice”–inspired dish using ramen in place of the rice. We poached the noodles and shocked them in an ice bath. Using a cast-iron wok, we sautéed onion, celery, peppers, shredded rotisserie chicken, and then added butter, fried a few eggs, and tossed the noodles in. I finished it off with a quick sauté, adding soy sauce and fish sauce. It was the perfect late-night snack.

Breakfast: I made the kids waffles this morning and dropped the girls off at school. My son stayed with me, and we grabbed a donut at H-E-B before heading out to Garner State Park for our big camping trip with friends.

Lunch: We arrived at camp, unloaded, and decided to make some simple turkey and cheese sandwiches. It was just the two of us, so sammies, Cool Ranch Doritos, and Gatorade got us going to set up for camp for everyone arriving later.

Dinner: Our annual camping trip usually has about fourteen adults and up to sixteen kids. This year was no different. We did a HUGE crawfish boil—eighty pounds. I did my best version of the Vietnamese boil (from Crawfish & Noodles in Houston), using ginger, lemongrass, garlic, Thai basil, fish sauce, and butter. The boil was stacked full with sausage, artichokes, mushrooms, potatoes, and corn. We invited another campsite over because we had so much food. It was, as always, an awesome evening. The kids loved it; the adults loved it. It is one of my absolute favorite meals of the year.

Breakfast: I decided to make some Dutch-oven buttermilk biscuits for the campsite this morning. It’s a simple recipe, but the key is to use eight coals underneath the Dutch oven and seventeen on top. Don’t ask me why, but it’s the perfect temperature. They were amazing with some butter and fig jam. I was a happy camper, as they say.

Lunch: I had a catering job, so I left after biscuits and drove back to San Antonio. A Gatorade and a bag of sunflower seeds were the best I could do for most of the day. Our catering menu today was a good mix of tacos and BBQ, so I snacked on a few tacos to hold myself over for dinner.

Dinner: Catering wrapped up, and I was able to come back to Garner for dinner. Chef Bowers from Playland was part of our group, and tonight was his turn to cook. He had just purchased a small Burmese/Thai grill, which packs some serious heat, so he used that to char up some chicken thighs, which he turned into tacos with spicy guacamole, limes, and corn tortillas. I had three extra racks of ribs, and my buddy Jon Cosmas brought some Alaskan king salmon, so we tossed it all on the grill with some lemons. Rain was on the horizon, so we packed up camp and headed home early.

Breakfast: I skipped breakfast and headed into work.

Lunch: I came into our headquarters and checked on the team. I had to make a run to Sanitary Tortilla Company to pick up our fresh masa for Chispas. It gave me a good excuse to eat what I believe to be the best sandwich in San Antonio. The torta ahogada at Ro-Ho Pork & Bread, located inside Sanitary, is a carnitas sandwich from Guadalajara, served on baguette, dipped in tomato broth, and topped with cabbage and pickled red onion. Add the spicy Chile Arbol salsa, and you have an amazing lunch for less than $10 and 20 minutes in and out. A true San Antonio gem.

Dinner: I’m exhausted and my wife and kids are out running around with sports, so I came home late and made a big bowl of cacio e pepe, the number one chef dish in the world. I sat on the back porch and listened to Gary Clark Jr. with a glass of bourbon. It’s the perfect nightcap—satisfying every time. 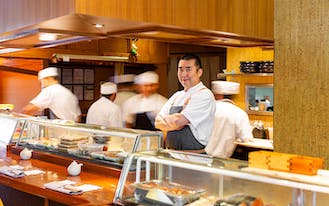