One morning this past fall, a FedEx truck pulled up around the back side of a nondescript, metal-sided industrial building in Driftwood, in Central Texas. Three solidly built guys in jeans and boots—former Navy SEAL sniper Judson Kauffman, former Marine fighter pilot Brent Looby, and former military intelligence analyst Ryan Campbell—hurried out the garage door, their cellphones poised to document the moment the cargo hold would open. Inside: a pallet of boxes containing a few thousand blue ceramic bottles custom-made in Mexico. A cheer went up. Chiseled faces broke into wide grins. It was the first shipment of bottles for the men’s new distillery start-up, Desert Door Texas Sotol.

Texas what? Sotol is a category of spirits traditionally made in northern Mexico—in Chihuahua, Coahuila, and Durango, specifically—and it was also distilled in what’s now the Trans-Pecos region of Texas by indigenous peoples. Although it bears a distant relation to tequila, it’s not made from agave plants, as tequila and mezcal are. Instead, Mexican sotol comes from the common sotol plant, Dasylirion wheeleri, a spiny-leafed succulent known as desert spoon that looks like a cross between yucca and agave. Texas sotol, which is what Desert Door distills, comes from Dasylirion texanum, or green desert spoon, which has thinner leaves. Common throughout West Texas and northern Mexico, the sotol plants have for hundreds of years been turned into moonshine, but sotol has been largely ignored as a commercial spirit. There are just a few brands, mostly made south of the border, and they’ve typically been hard to find in the United States.

But that’s changing. With tequila and mezcal booming in popularity—U.S. sales have more than doubled in the past dozen years and show no signs of slowing—Mexican sotol has started appearing in fancy cocktail bars and liquor stores and is being touted by the likes of Esquire as the next big thing in drinking. This positions Desert Door as a potential leader in a rare category of spirits, one that, although brand-new to most American palates, has a rich history. Not a chile-infused vodka or cinnamon whiskey, in other words, but something pure. “It’s really the original Texas spirit,” claims Kauffman, as he gathers with Looby and Campbell in their rustic-modern tasting room adjacent to the cavernous distilling and bottling space.

Less than two years ago, the three military vets were holding down day jobs while pursuing their MBAs at UT-Austin’s McCombs School of Business, where they took a class together called “New Venture Creation.” After the students were divided into groups to build a business plan for a start-up, the men spent a lot of time talking about tech-focused ideas: an unmanned cargo plane service, a cloud computing service. Eventually, Kauffman threw out a wild card. “Let’s just do something fun. You know, we don’t need to solve all the world’s problems.”

A sixth-generation Texan, Kauffman spent a lot of time in West Texas as a kid and remembered his uncles talking about the hooch the old-timers made from the ubiquitous “soto” plants. What about a sotol business? They won the class competition.

The project became a real start-up before any of them realized it was happening. Campbell, the group’s inveterate tinkerer, who studied microbiology as an undergrad in Florida, started making moonshine at home to get the hang of things, while Kauffman and Looby set about designing the rest of the business and raising money from friends and family.

With military discipline, they built out the 6,500-square-foot production facility—including a giant custom steamer dreamed up by Campbell, a departure from the earthen ovens used for Mexican sotol, which is roasted, not steamed—and opened their doors in November in a region of the Hill Country that’s become a hub for new distilleries.

Desert Door's Judson Kauffman likes to mix sotol with Topo Chico and a squeeze of lime. If you want to get fancy, add grapefruit juice.

So far, the Driftwood tasting room has been the only place the public can sample the spirit or buy a bottle, but Looby says he expects to have distribution in a few bars and restaurants around Austin and San Antonio this spring, with wider availability across Texas later in the year.

To start, most of what will be available is the 80-proof clear version of Desert Door, which, like a silver tequila, works best in fruit-forward cocktails. On its own, it smells a bit like tequila but tastes grassier, almost minty. A 100-proof, oak-aged variety of Desert Door, still in extremely short supply because it must age for about six months, is more of a sipper, with a richer, smokier flavor.

Looby likes to say that sotol “tastes like where it’s from.” Just as bourbon can evoke a misty Kentucky holler and Scotch a salt-sprayed cliff, Texas sotol tastes arid, like wide-open spaces and hard earth.

If Desert Door’s founders are right and sotol becomes the new mezcal, they should have little trouble getting enough plants to harvest and cook. As anyone who’s ever driven on Interstate 10 can see, somewhere around Ozona the vast expanses teem with the spiky plants. The desert spoon takes a dozen or so years to mature and grows back when it’s cut off at the roots. Ranchers have been more than happy to let the team hack away at them and haul off trailers full.

For now, Looby is the only one of Desert Door’s founders working full-time at the distillery; Kauffman and Campbell also work in management consulting. But these Texans have big ambitions.

“We want this to become a national brand,” Looby says. But he cites the advice of another Texas liquor entrepreneur, Tito Beveridge, an occasional mentor to the Desert Door team. “He said that we don’t have any business going national until this spirit we’re crafting, this history of Texas in a bottle, succeeds right here first.” Desert Door’s clear sotol, $38; oak-aged variety, $60. 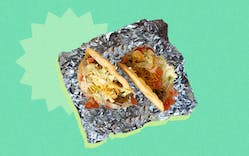