The Road to Nowhere…
3/16
The  Wildflower  Drive 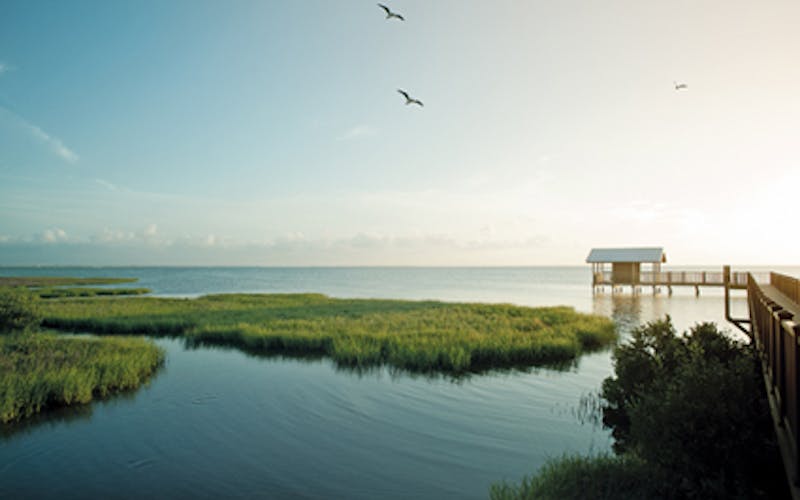 DISTANCE: 89 miles
NUMBER OF COUNTIES: 2
WHAT TO READ: David Allen Sibley’s The Sibley Guide to Birds

Hugging the U.S.-Mexico border in far South Texas, the sultry stretch of land known as the Lower Rio Grande Valley is the Casablanca of the bird world. Sooner or later all of the usual—and some very unusual—suspects end up here. Want to see a green jay, which looks as though it has been dunked in a bucket of chartreuse paint? No problem. What about a black-and-orange Altamira oriole, which wears a Halloween costume year-round? Easy. Species from Mexico and Central America find the Valley’s subtropical climate very much to their liking, and U.S. and Canadian birds take time out here for R&R during their marathon migrations.

Happily, seeing some of the five hundred species that live or visit here is a breeze because many top sites lie just off U.S. 83. And though I saw my fair share of fast-food joints and trailer parks, what

I remember most about  the scenery are the palm trees and bougainvillea that dot the route.

Begin your trek near Mission at the sprawling Bentsen–Rio Grande Valley State Park. This oasis is part of the World Birding Center, a fantastic group of nine government-sponsored sites spread across the area. Right off the bat, I saw a great kiskadee, a flycatcher with a black-and-white mask and bright-yellow vest. As it turns out, the mammal-watching isn’t too shabby either. I joined forces with a couple from Wisconsin, and the three of us waited patiently for a bobcat, javelina, or coyote to cross the trail as daylight faded.

Just a mile away is the National Butterfly Center, where more than two hundred species of butterflies have been sighted. Kids love the green ravine called the Hackberry Trail that forms a sort of leafy secret tunnel. At the end of it is a clearing where multiple bird feeders and slices of fresh orange guarantee you’ll see something fun, like a flock of red-winged blackbirds or maybe some zebra butterflies. For a change of pace, from there I headed eleven miles east to a WBC site in McAllen called Quinta Mazatlan, a lovely Mexican colonial–style house encircled with walking paths and well-kept lawns. There I was startled by a whole flock of chachalacas, big, goofy brown birds that sound like a cross between a turkey and a donkey.

At Estero Llano Grande State Park, in Weslaco, another WBC site, a ranger informed me that it is the best place in the Valley to see paur aques (“par-ah-keys”). You’ll need keen eyes, though, because these astonishingly camouflaged relatives of nighthawks look exactly like a pile of dead leaves. After a stroll, relax on one of the park’s decks overlooking a tranquil pond and let the world fly or paddle by. During the Big Sit birding event last year, an astounding 99 species were spotted in 24 hours.

Rested up, get in your car and continue east on U.S. 83 before turning onto Texas Highway 100. The road rolls toward warm sea breezes and the South Padre Island Birding and Nature Center, a WBC site where you can see dapper gray-and-white laughing gulls and ponderous brown pelicans sail over the water. Finish your Valley excursion by going north via Park Road 100 as the Gulf of Mexico spreads out before you. When you reach the numbered beach roads on the right, park, take off your shoes, and go scrunch your toes in the sand. Give the horizon your best thousand-mile stare and enjoy the salt air and solitude at the very  tip of Texas.

The Road to Nowhere…
3/16
The  Wildflower  Drive