The Canyon Drive
7/16
The Off-Road  Drive 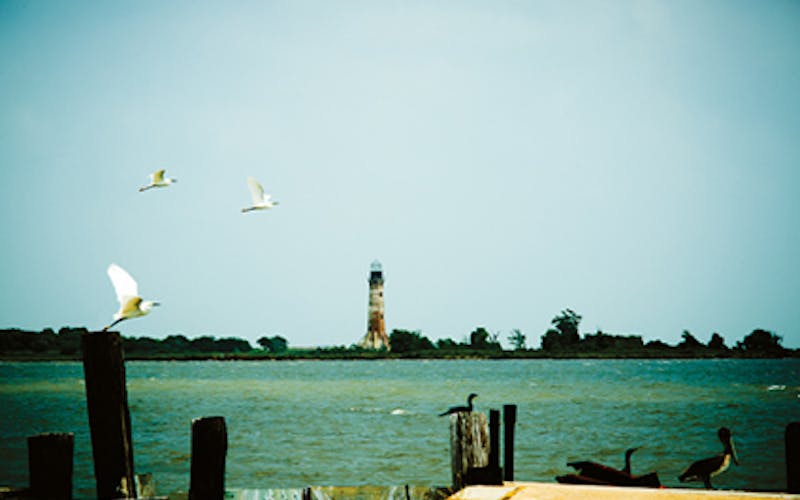 DISTANCE: 308 miles
NUMBER OF COUNTIES: 11
WHAT TO BRING: A pair of binoculars

I started as far east as you can go on the Gulf Coast and still be in Texas. And since the Sabine Pass Lighthouse, which is technically across the state line in Louisiana, is on a private road, I decided to drive along the border just south of the Sabine Pass Battleground State Historic Site, on First Avenue, until the structure came into view. Even from a distance, it was impressive. While only about as big as my thumb when my arm was outstretched, I could clearly make out the octagonal lighthouse, built in 1857. It was a whopper—80 feet of brick going straight into the air as if ready to lift off from its eight giant buttresses. To the east, only a few buildings dotted the landscape. To the west, there was nothing but marshland as far as the eye could see.

After lunch, I headed toward the McFaddin National Wildlife Refuge. I had wanted to snake next to the Gulf by way of Texas Highway 87, but hurricanes had damaged some parts of the road between Sabine Pass and High Island, so I wound my way west out of Port Arthur along Texas Highway 73. The landscape quickly changed back to marshland, with tall grass on either side of the road. I passed Boondocks Road and Big Hill Road, along with other references that reminded me I had left the city far behind.

When I finally returned to Highway 87 and reached Bolivar Peninsula, I began driving alongside the water. I passed only scrub for a long while and then, near the west side of the peninsula, groups of houses in teal, coral, yellow, and white, all on stilts. It was here that I nearly drove off the highway when I spotted the 1852 Bolivar Point Light Station on my right. I realize it’s 15 feet shorter than Sabine Pass, but the black 65-footer is so close to the road it’s hard not to rubberneck. My apologies to anyone inconvenienced by my spastic weaving.

Continuing along the coast for 154 miles, I headed toward Port Lavaca on Texas Highway 35, and after passing a good deal of lush farmland, I started seeing little bays and long bridges. The Half Moon Reef Lighthouse was directly next to the highway, built on pier and beam. Its wood exterior was painted white, and unlike any other lighthouses on my tour, I could simply walk inside. It isn’t as tall as the others I saw; in fact, it’s barely three stories high. Built in 1858 in Matagorda Bay, the hexagonal structure weathered many hurricanes until a storm in 1942 did it in for good. A private resident bought it, moved it inland, and donated it to the Calhoun County Historical Commission. I walked around inside the structure—I even had to turn the lights on myself—and wandered in a circle looking at photographs of the beacon at its original site.

But the prize of my trip was still seventy miles away, in Port Aransas: the Lydia Ann Lighthouse. Located on an island and privately owned, it still has a keeper and a functioning light. From Aransas Pass, I headed down Texas Highway 361 and spotted the lighthouse from a distance, the only structure on the entire horizon. Originally built in 1855, it has suffered some damage in the intervening years, but it is currently in great shape, a 55-foot-tall  octagonal brick tower. The best view, I was told, is at  Virginia’s on the Bay seafood restaurant, and as I sat at  my table, I marveled at the  scene. But next time I’ll know to time my arrival at dusk, when the beacon is fully  illuminated.

The Canyon Drive
7/16
The Off-Road  Drive