Meshah Hawkins couldn’t believe that the man in the video—who was facedown on the pavement, his neck pressed under the knee of a Minneapolis cop—was her childhood friend George Floyd. Then she heard his voice. “Please,” the man begged the officer, as well as several others standing nearby. “Please, I can’t breathe.” Hawkins, sitting in her Houston home, was horrified. “When I heard his voice crying out,” she said, “when I heard the pain in his voice, it broke my heart.” She couldn’t bear to watch anymore, and she shut off the video taken on Monday.

Floyd, 46, continued saying those words, and police officer Derek Chauvin continued ignoring them, choking Floyd with his knee. After more than four minutes, Floyd went limp. Still Chauvin kept his knee there. When he finally stood up, the officers rolled Floyd onto a stretcher and took him to the hospital, where he was pronounced dead. The next day, the video of Chauvin and Floyd had gone viral, and the four cops present were fired. (Chauvin has since been charged with second-degree murder and second-degree manslaughter, and the three other former officers have been charged with aiding and abetting murder). That night, activists protested Floyd’s violent killing throughout the streets of Minneapolis.

In Houston’s Emancipation Park, not far from where Floyd and Hawkins grew up, friends and family held a rally and prayer vigil earlier this week for him. About two hundred people gathered, and friends reminisced about Floyd; they talked about how he was active in helping Houston’s Third Ward community, his basketball playing, and his rapping on DJ Screw’s famous tapes in the 1990s, when Floyd and dozens of others helped establish Houston as one of the world’s great hip-hop scenes. An anguished Milton Carney, who had organized the rally, shook his head as he told reporters about the friend he had known since the sixth grade: “Anybody who knows him will tell you he’s not a confrontational person.” Carney was dumbfounded about Floyd—and terrified. “I hate it that it’s come down to law enforcement versus the black community,” Carney said later. “Something’s got to be done.”

Floyd’s death has drawn parallels to the 2014 killing of Eric Garner, who died after a cop put him in a chokehold on a Staten Island sidewalk; his last words were “I can’t breathe,” a phrase that became a call to action for the Black Lives Matter movement. Floyd’s killing, just one of many instances of unarmed black Americans dying at the hands of white police officers, has similarly galvanized protesters. As the week went on, protests spread to almost every major American city, including Los Angeles, Atlanta, Oakland, and Brooklyn. On Friday night, protesters demonstrated in Houston, chanting “I can’t breathe,” and confronted police, who used pepper spray and arrested about a dozen activists.

George Perry Floyd was born in October 1973 in North Carolina, but his mother soon moved him and his siblings to Houston, where they lived in the Cuney Homes housing project in the Third Ward. As a young man, he had big dreams: “When I grow up I want to be a Supreme Court Judge,” he wrote in a second-grade essay. His interests turned to basketball, and he played in the local YMCA league as he sprouted to six feet seven inches tall and 250 pounds. Floyd was a gifted athlete, playing basketball as well as football at Jack Yates High School, and he earned the nickname Big Floyd. As a tight end, Floyd made acrobatic catches in the end zone and helped lead his team to the 1992 5A state championship game, where they lost to the number one school, Temple.

Friends remember Floyd as an amiable gentle giant. “He was a soft-spoken guy,” remembers Hawkins, who thought of him as an older brother. “He was respectful of the girls and very humble about his success.” He often took on the role of peacemaker, says his friend Kuentin Brown, who also goes by the name Wood. “Because he was so big, he was always stopping fights.”

Floyd graduated from Yates in 1993 and—dreaming of playing in the NBA—got a basketball scholarship to what is now South Florida State College, but returned home before the year was out. Hawkins said Floyd wasn’t happy in the Sunshine State: “He was like a fish out of water,” she recalls. He enrolled at Texas A&M-Kingsville, where he also played basketball. He ended up dropping out before the end of his sophomore year.

Back in Houston, he played club basketball and hung out with friends like Carney. After practice, the two would drive around and make up raps. A lot of their neighbors, like Milton Powell, a.k.a. Big Pokey, were going over to the house of a man named DJ Screw, who had a studio. At the time, Screw was becoming famous around Houston for making tapes on which he would record beats, invite aspiring rappers to freestyle over them, then slow the whole thing down and sell it. Young rappers like Lil Keke and Lil O hoped to get invitations to Screw’s house so they could show him their stuff.

In early 1994, a friend who knew Screw took both Floyd and Carney to the DJ’s house. Carney was too nervous to try it out, but Floyd got on the mic and started rapping. Screw was impressed with his flow. You can hear Big Floyd (as everyone called him) do a freestyle on a 1996 tape, “Sittin’ on Top of the World,” along with Chris Ward and AD. “Welcome to the ghetto,” Floyd rapped in his deep drawl. “It’s Third Ward, Texas.”

Floyd, who still dreamed of playing basketball for a living, ultimately decided not to pursue a music career. But he occasionally performed in public and spent a lot of time at Screw’s house—friends think he freestyled on at least a half-dozen tapes, though Wood, who is also a rapper, thinks it was four times that many. Screw didn’t confide in a lot of people, Wood says, but the DJ and Floyd grew close. “He was a great listener,” Wood says of Floyd. “A consoler.” “Ain’t worried ’bout bills,” Floyd rapped on one of the tapes in 1998, when Screw was at the height of his popularity, “eating four-course meals, five fingers on steel.”

The next decade was a struggle for Floyd, says Hawkins. “He got into trouble,” she says. “He fell into the things a lot of the guys in the neighborhood were doing.” Floyd was arrested and charged with theft in 1998, and later with drug possession. In 2009, Floyd went to prison after pleading guilty to aggravated robbery with a deadly weapon. He was paroled in 2013, after four years at the Diboll Unit in East Texas. When he came back to Houston, he wanted to help elevate his neighbors and the community where he’d grown up.

Floyd spent the next couple of years living in his old neighborhood. He and his girlfriend, Roxie Washington, had a daughter together, and he began helping Resurrection Houston, a church that ministered and aided people around the Cuney Homes, where he grew up. The church would host a Sunday service called Church in the Bricks on the project’s basketball courts. Floyd helped bring the baptism pool to the court, set up the chairs and tables, and clean up afterward. But the main thing he did, as the church’s Nijalon DuBoi James Dunn says, was validate the church’s presence in the community: “He knew everybody and everybody knew him. We were outsiders, but Floyd endorsed us and the work we were doing. He wanted to see the Third Ward changed.”

Around 2014, Floyd decided to make a fresh start in Minneapolis, where several of his Third Ward friends had gone. “He always tried to do better,” says Hawkins. She ran into Floyd not long before he moved, when he told her his plans. “First thing I told him was, ‘There are no black people up there,’” she says. Floyd was laughing, but Hawkins was worried. “He was a big black guy. If you didn’t know him, you might be intimidated.”

Floyd got a place in St. Louis Park, a Minneapolis suburb. He told friends back home that he was happy there. He had a fiancée and he was getting ready to start training to drive eighteen-wheelers. Most recently Floyd worked as a bouncer at Conga Latin Bistro, a restaurant and club where rappers and techno artists performed, though he had told the owner, Jovanni Thunstrom, that he was looking for another job after the restaurant and venue was closed because of the pandemic.

Thunstrom was appalled when he saw the video of his friend and colleague earlier this week. “No one had nothing bad to say about him,” Thunstrom says. “They all are shocked he’s dead. He never caused a fight or was rude to people.” On Instagram, local rapper Maria Isa, who played at Conga, called Floyd “a gentle precious funny giant.”

His family and friends back home are devastated. “We loved him,” adds Hawkins. “He was a sweetie pie.” On Tuesday night, Hawkins, a teacher and mother of two boys, could barely sleep, thinking of what she had seen and heard that morning. She couldn’t shake the feeling that her two sons could one day be targets too.

Update 06/03: This piece has been amended to reflect that Derek Chauvin has now been charged with second-degree murder, and that the three other former officers present were charged with aiding and abetting murder.

Update 06/02: This piece has been amended to reflect that local police used pepper spray on protestors in Houston on Friday. 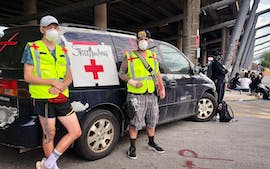 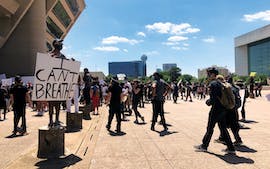 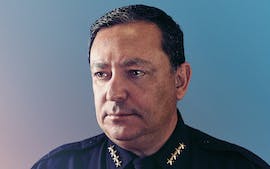