On April 26, citing its intent to celebrate the history and culture of the region, the Panola County Commissioner’s Court celebrated Confederate Memorial Day—ignoring the most highly decorated soldier from that county, Milton Murray Holland, a slave who was born there and who fought for the North. He grew up on a plantation five miles west of Carthage, was freed by his white father, and earned the Medal of Honor fighting for the Union in Virginia. When I brought up Holland’s name with County Judge Lee Ann Jones, she had never heard of this native son of Panola County who is now buried with honors in Arlington National Cemetery.

On that same day last month, the Austin City Council honored Holland’s older brother by changing the name of a street from Jeff Davis Avenue to William H. Holland Avenue. The council recognized Holland’s work running freemen’s schools, serving on the Travis County commissioner’s court, and successfully pushing the Legislature in 1887 to create a school for blind and deaf African American children of Texas. Also, as a member of the Texas Legislature in 1876, Holland passed the bill creating what became Prairie View A&M University. But until recent years, his name had been all but lost to history.

How two local Texas governments could remember the Civil War and Reconstruction in such different ways on the same day this year is emblematic of a national struggle to come to grips with the nation’s original sin of slavery a century and a half earlier. For white southerners in places like Panola County, it’s a matter of honoring ancestors and independence without regard to the ugliness that the Confederacy represented. For blacks and progressive whites, it’s about correcting a historical record that honored heroes of the Confederacy in a vacuum, while ignoring slavery and the struggle for civil rights after emancipation.

Panola County judge Jones seemed defensive about her court passing a resolution designating April as Confederate Heritage and History Month and April 26 as Confederate Memorial Day. She said a similar resolution passed in 2017 without anyone making a peep. “But we’ve had some squawk this year about it, and people are saying that, you know, we’re the KKK, and we’re just—it’s been horrible,” Jones told me in a telephone interview. There is nothing in the resolution that mentions slavery one way or another, she said.

Who’s been squawking? I asked. “Some of the blacks, and some whites that are saying, how can we do that when it was, you know, when it was the worst period of time for slavery? But it’s not about that, it’s about history. And these people [whose] heritage rested in those gentlemen who fought.”

She said the resolution was brought to the court by seven or eight men who are members of the General Horace Randal Camp #1533 of the Sons of Confederate Veterans. The resolution refers to the conflict as the “war between the states” and declares that the effort is intended to ensure that the “true history of the 1861–1865 period is preserved, honoring locally and statewide those who served Texas and the Confederate States of America.”

In the year before Texas seceded from the Union, there were 3,117 slaves in Panola County, according to the U.S. Census. That was more than a third of the county’s total population.

One local resident took the commissioners to task in the local newspaper, the Panola Watchman. “Everyone in this country knows the history of what the Confederacy represents and what the symbol of that flag represents,” Jill McLemore, a white woman, wrote in a letter to the editor. “To the people that are okay with this decision, do you really want the rest of the country to view us like this?”

What surprised me the most was that County Judge Jones had never heard of Milton Holland or the Holland family plantation. “Is that where Holland Quarters comes from?” she asked me. Yes. “Wow.” The black community of Holland Quarters is the old slave quarters of the Spearman Holland plantation, and is probably where Milton Holland was born. The family history had been covered by the Panola Watchman when local African Americans sought a state historical marker for Holland Quarters.

Even earlier this decade, Milton Holland was almost unknown in Texas. Holland’s Medal of Honor is credited to Ohio, where he organized a company of free African Americans to serve in the Union army. I learned of his exploits while working on a biography of then-Governor Rick Perry when he was running for president. At the Governor’s Mansion Christmas party in 2011, Perry had the stairs lined with photographs of Medal of Honor winners from Texas. I pointed at them and said he’d missed one. He asked me who. “Civil War hero Milton Murray Holland,” I replied. “What did he win for?” Perry asked. And I said, “He won for running your great, great grandfather out of a ditch in Virginia.”

When Holland organized his company, the federal government did not allow men of African heritage to serve as officers, but the governor of Ohio offered Holland the opportunity to become an officer if he would just swear he was white. As a multiracial man, Holland had Northern European features and light skin. Holland refused and served as a company sergeant instead. On September 29, 1864, at the Battle of New Market Heights, the captain of Company C of the 5th U.S. Colored Troops fell wounded; Holland took command and led the company as part of the regiment’s successful charge, which drove the Texas Brigade out of its defensive position protecting Richmond. Perry’s great, great grandfather, D.H. Hamilton, was one of those Confederate soldiers.

After the war, Holland became a lawyer in Washington, D.C. Along with Frederick Douglass, he tried to convince Congress to integrate the nation’s public schools. As an attorney, he fought against police brutality. When he died in 1910, Holland was the highest-ranking man of African descent working in the federal government—an auditor for the postal department.

In Central Texas, the effort to rename a street in Austin from that of the president of the Confederacy to Holland’s older brother was part of a larger effort in the community to rename public places that honor Confederate leaders. Although a prominent leader of Austin’s African American community from about 1870 until his death in 1907, Holland’s name had largely faded in the city’s historic memory, in part because his family moved away. His name started regaining a legacy in the early part of this decade, initially because of his service as one of the 52 African Americans members of the 19th century Texas Legislature or the constitutional convention of 1875.

Austin city councilwoman Leslie Pool and I originally worked together on proving Holland had been a member of the Travis County commissioner’s court several years ago as she was organizing the Travis County History Day. I was working on a history of the Holland family at the time. Holland had been born a slave in Holly Springs, Mississippi, and was brought to Texas as an infant in 1842. In postwar Texas, Holland was essentially the superintendent of the segregated schools for the children of freed slaves. When the time came to rename Jeff Davis, Pool thought of Holland.

Honoring Holland in this way “recognizes how we are advancing as a society,” Pool told me. “The social climate is such that we want to recognize figures who have contributed to our community but have been overlooked. We’re recognizing people who have done good deeds for our community, and the time is right to lift up those folks who have been lingering in the shadows and deserve more.”

Bird Holland, the boys’ father, had purchased the brothers, two other siblings, and their mother in 1852, and taken them to Ohio, where he paid abolitionists to raise them. Their owner, Spearman Holland, was Bird’s half-brother. One of the ironies of the Holland brothers’ life story is that Bird Holland later, as Texas secretary of state, affixed his signature to a new state constitution joining Texas to the Confederacy.

As a Confederate officer, Bird fell in 1864 during the final charge against federal lines at the Battle of Pleasant Hill in Louisiana. His friends had his body returned to Austin after the war, reinterring him beneath a monument inscribed with a Latin phrase that translates as “‘Tis Sweet to Die for One’s Country.” His grave sits near that of former Texas governor A.J. Hamilton and not far from that of Alamo survivor Susanna Dickinson in Oakwood Cemetery. Bird rests on top of a hill, and at the bottom, in the colored section, is the grave of his eldest son, William H. Holland, who now has a road named after him.

Do you have feedback, questions, or comments for R.G. Ratcliffe? You can reach him here. 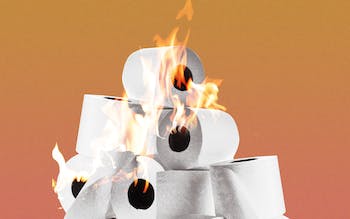