Johnny Walker is a man with stories to tell. His first job was selling ladies’ shoes, and he had stints as a private investigator, a singer, and, he laughs, even as a male model: “Can you imagine it?” But barbecue has long been a part of his family, and that’s where his passion lies. The first time I went into his restaurant, Momma Jean’s BBQ in Lampasas, he sat down with me after serving all the customers in line. We talked a bit about barbecue and the restaurant business, but Walker wanted to explore a deeper conversation. He’s been a student of barbecue his whole life, and wants to teach others the process and also the history. (See Walker in action as part of our Small Town Smokers video series.)

This excerpt from a piece I wrote about Momma Jean’s earlier this year explains it well:

Johnny Walker was born and raised in South Dallas in the sixties. The city was so strictly segregated that the first white person he remembers seeing up close was a customer at Carter’s BBQ. “To see a white guy flip a tie up over his shoulder and talk to you,” he told me, “I’d never seen that before.” To him, this was evidence of the magic of barbecue. It brought people together, and not in the romanticized version of that notion. Barbecue caused him to interact with people he never would have otherwise. “The only other white people that would come to South Dallas were the police,” Walker says.

Now he’s a pitmaster with his own restaurant, Momma Jean’s BBQ in Lampasas … It’s named after his 89-year-old mother, who taught him how to cook. Her brothers taught him how to barbecue. They cooked whole animals over a trench in the ground; the proper heat was gauged by holding their hands over the coals.

Walker chose a modern rotisserie to smoke his barbecue at the restaurant, but I get the feeling he might dig a trench in the ground if the Health Department would let him. His menu is simple, just the barbecue basics, but after one bite of his fatty brisket with a smoky, caramelized bark wrapped around beef that’s so tender it’s creamy, you won’t need to look much further.

Walker talks to us about the meaning of “soul food” and the love his own mom put into her cooking. 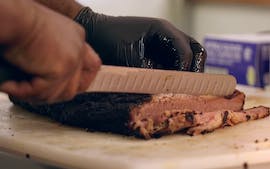 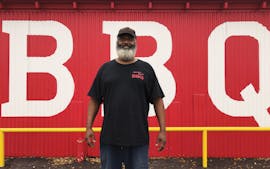 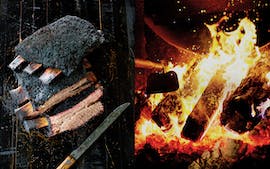