“Are you ready to start your plant-based journey?” asked Susann Glenn, manager of communications for Housing and Dining at Rice University, opening the door into the West Colleges Servery. It’s one of many dining halls on the Houston campus, but this one is on a mission. Senior executive chef Roger Elkhouri has developed vegan versions of various meats, although he uses the term “plant-based” instead. “It’s for everybody, not just for vegans,” said Elkhouri, who creates non-meat versions of dishes like ham, corned beef, pastrami, and, most recently, brisket.

This “brisket” isn’t smoked. He uses liquid smoke for flavoring and seasons the dish with his own mix of spices. The secret ingredient is porcini mushroom powder, which provides the umami flavor. The bulk of this faux meat is wheat gluten, which Elkhouri forms into a loaf that roughly resembles the size and shape of a brisket. That’s about where the similarities end.

I tried a sample of the plain slices, which were pretty neutral in flavor. The dish they serve to students is a sandwich of the sliced “brisket” with barbecue sauce and caramelized onions. Those toppings are where most of the oomph in flavor comes from. The overall creation is certainly not going to be a meat replacement that any barbecue-loving Texans would abandon smoked beef for, but many of Rice’s international students are vegetarian, and this might be their only bite of anything resembling Texas barbecue. I’m interested to see how these plant-based meat substitutes progress. If a more convincing version developed someday, who knows, they might even fool me. But we’re not there yet with plant-based “brisket.” 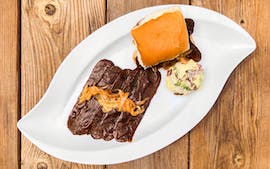 We Tried the Vegan Brisket at Rice University 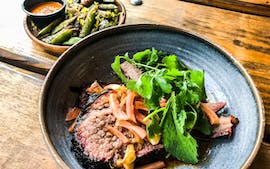