FINALLY JASPER IS ALONE. THE KLAN AND THE NEW BLACK PANTHERS and the politicians and the media have left town, and the conversation around the long table at Texas Charlie’s restaurant has returned to dry weather and Viagra humor. (“Charlie’s so tight he bought one pill and taped it to the bedpost so he can roll over and lick it.”) But to say that things are back to normal in Jasper would be to miss the point of everything that has happened since the early morning hours of June 7. Three white men have been indicted for giving a black man a ride in a pickup, driving him to a deserted area east of town, beating him senseless, chaining him to the truck by his ankles, and dragging him down a back road until his body began to disintegrate. Evil happened here, the kind of evil that focuses the attention of the entire world on a single town and raises the terrible question of collective guilt.

At first the town that calls itself the Jewel of the Forest seemed fated to share in the responsibility for the gruesome murder of James Byrd, Jr. The accused killers, who are awaiting trial on charges of capital murder, are ex-convicts with ties to white supremacist prison gangs. Jasper fit too easily the Southern backwoods stereotype that is America’s least-loved regional subculture. A town of eight thousand people, around 45 percent of them African American, it is about as deep as Deep East Texas can get—seventy miles closer to Natchez, Mississippi, than to Austin, and just an hour’s drive from Vidor, the capital of Klan country. It is not on the way to anywhere, unless you’re heading north from Beaumont to fish in Sam Rayburn Reservoir or going from Woodville to Bon Wier.

And yet the two hundred or so journalists who swept into Jasper did not find the racially divided town-on-a-powder-keg that they had expected. Instead they found that Jasper has a black mayor, a black chamber of commerce chairman, and a black CEO of Jasper Memorial Hospital; until recently, it had a black school board president. The First National Bank has a black man on its board of directors, and the Jasper Country Club has black members. “Those boys didn’t learn to hate here” was the pronouncement I heard at Texas Charlie’s. Even before a confrontation between the Klan and the Panthers passed without violence, the media had rendered its verdict on Jasper: Not Guilty.

“Don’t be surprised if tiny Jasper comes through not merely okay but as a stronger, more racially unified example for America,” wrote William Raspberry, a nationally syndicated black columnist. Like most of the reporters in town, Raspberry attributed Jasper’s grace under pressure to its white leaders, who “moved quickly and convincingly to demonstrate that they were as aghast at the brutishness as were their black neighbors.” But white Jasper knew how much it owed to the town’s black leaders. Had they not cared so much about Jasper, who knows what might have occurred. “Their mercy saved us,” a white member of the city council told me.

What makes Jasper different? Former state senator Don Adams, whose family has lived in the area since Texas joined the Union, attributes the town’s unity to the fact that the railroad goes around Jasper rather than through it. Jasper has no formal divisions, no wrong side of the tracks. Although most black residents live in the areas known as North Quarters and South Quarters, an outsider would have a hard time identifying where white neighborhoods end and black neighborhoods begin.

The location of the railroad line was happenstance, the result of a bitter fight for preeminence between Jasper and Kirbyville, its longtime rival eighteen miles south. Around the turn of the century, Kirbyville wanted to wrest the county seat from Jasper, and timber baron John Henry Kirby, who built the railroad north from Beaumont in the 1890’s, did his part for the town that bore his name by refusing to extend service to Jasper. Eventually he relented, but in a last slap at Jasper, he put the tracks around the town instead of through it. His act of spite turned out to be a blessing.

Jasper has grown to the west, away from th e tracks and the lumber mills that followed them out to the east side. Many of its most prominent citizens, white and black, live in a heavily wooded subdivision on the northwest corner of town, where the houses are large but not oversized. In the older parts of town, homages to the plantation style are common; even some one-story homes have white columns. Downtown, a classic three-story courthouse dominates the square; a prayer vigil held here after the killing drew far more Jasper residents than did the Klan assembly and New Black Panther counterdemonstration twelve days later. The Swann Hotel, a rambling Victorian whose Karo pecan pie once attracted Sunday diners from as far away as Houston, has been restored and reopened, as has another inn, the Belle-Jim. Churches are everywhere in Jasper: downtown, in neighborhoods, on Martin Luther King Street in the North Quarters, and scattered along the back roads.

Like many places in East Texas, Jasper has folklore but little written history; folks will tell you that racial relations have always been better here than in other towns in Deep East Texas, but there is scant evidence on either side. In 1909 a Negro convicted of raping a white woman in Beaumont was brought to Jasper because it was feared that he would be lynched; the authorities must have regarded Jasper as a more benign place. (He was hanged according to the law, and, it was said, more than a few white Jasperites mourned his passing because of the hymns he could be heard singing in a rich baritone.) In the days of segregation, white citizens attended graduation exercises for the colored high school, and the principal of the colored schools, J. H. Rowe, was one of the most revered men in town. A collection of reminiscenses by the late Marvin Hancock, the mayor of Jasper during parts of five decades covering the thirties into the seventies, credits Rowe with “the harmony between the Whites and Blacks.”

Jasper’s black residents have different memories: The city swimming pool was filled with cement following desegregation, and the baccalaureate services for high school graduates were suspended around the same time, not to be resumed until two years ago, so sensitive was the issue of what church they should be held in. That is why the black viewpoint was so important in the days following the murder of James Byrd, Jr. Uppermost in maintaining the peace were the reactions of the Byrd family (“We don’t want any more bloodshed; we just want justice and peace”) and of black leaders like Walter Diggles and George Miller.

“I don’t represent the black community,” Diggles told me. “I represent Jasper.” A tall man with a receding hairline, Diggles and his family moved from Dallas back to his hometown in the early eighties, and he went to work for the Deep East Texas Council of Governments. Since 1990, he has been DETCOG’s executive director. “I know the people in Jasper, Texas,” Diggles said. “They are my neighbors, friends, and associates. The men who committed the murder, that’s just not the kind of people who make up the community.”

When Jesse Jackson came to town for Byrd’s funeral, law officers escorted him to Diggles’ office. “He hadn’t talked to anybody in the community,” Diggles said, “and I wanted to be sure he got the message. ‘Do you understand what’s going on here?’ I asked him. ‘The DA is calling for capital murder charges. Forty FBI agents have joined the investigation. Blacks and whites are working together. You need to compliment the mayor and the sheriff and pull this community together. We’re not going to start a riot.’” And Jackson was a smart enough politician that he did what Diggles told him to do.

George Miller is the head administrator of the local hospital. In his first two years on the job, he eliminated a $2.9 million debt. “I love this little town,” he said. But when he was one of the leading candidates for his job, he wasn’t so sure about moving to Deep East Texas. A native of Ohio, he and his wife drove unannounced from Fort Stockton, where he was working at the time, to Jasper, just to see how black people were treated. He wore jeans and a baseball cap (though at five feet four inches and 145 pounds, he hardly looked menacing) and walked around the hospital. “People were real friendly,” he said. “They asked me if they could help me find where I was going.” He went into a couple of restaurants. His wife went shopping and bought a dress. “Anybody can treat the boss well,” he said. “I found out they treat ordinary people well too.” Like Walter Diggles, he regarded the response to the murder of James Byrd, Jr., as a Jasper problem, not just a black problem.

“The Panthers had a press conference,” he told me. “They said they were going to teach us how to shoot and defend ourselves. I got up and looked right at them. ‘When Dallas is safe to walk the streets at night,’ I told them, ‘then you can come down here and tell us about Jasper.’”

The rough times are not over for Jasper. A trial lies ahead, probably early next year, and then the media will be back, and probably the Klan and the Panthers too. The jury pool will be countywide, and there are parts of the county that, to put it kindly, are not like Jasper. But for the moment Jasper has reminded America that there is more to life than racial identity—there is also home, family, community, achievement, and faith. “Just because we’re not in Ebony or Jet,” said Walter Diggles, “doesn’t mean that we’re not in the mainstream of the American dream.” 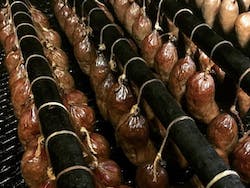 In the Land of Links

How Much of a Difference Would Police Body Cameras Really Make?

So Far from Heaven, So Close to Texas: Duncan Wood on Trump, Mexico, and Texas