Welcome to In Season, our series celebrating the juiciest fruit and crispest veggies in Texas. This summer, we asked local chefs to share stories about their favorite items of seasonal produce—and create original recipes that make the most of summer bounty.

Some people grow up with fragrant oranges piled in ceramic bowls on their kitchen countertops. Others have memories of reaching into canisters filled with yogurt-covered pretzels and oatmeal chocolate chip cookies. In chef Andrew Weissman’s San Antonio home, there was an abundance of red bell peppers. It was his family’s thing. He recalls evenings at the dinner table of his San Antonio home devouring the mildly sweet vegetable, roasted and drenched in olive oil and flecked with fresh garlic and thyme. And he still enjoys preparing them this way.

“I think it’s in my genes,” he says of his affinity for the peppers, which were also a staple on his grandmother’s kitchen table. One year, his mother gave him a case of red bell peppers for his birthday. He’s cooked with them at Signature, his revered San Antonio restaurant. And now his youngest son is following in his footsteps. “He’s a maniac about bell peppers,” Weissman says. “We eat them like apples.”

This vibrant crop emerges with the summer heat, and its versatility makes it a no-brainer grab for farmers’ market hauls. Bell peppers can be grilled, pureed, turned into soup, stuffed with ground beef and shredded Monterey Jack cheese, and snacked on raw. In this recipe, Weissman blisters the vegetable on the stove in a way that brings him back to those early evenings spent around the dinner table. 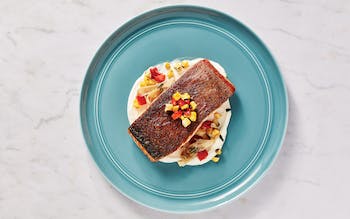