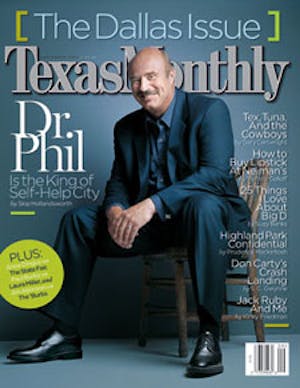 SOMETHING CLICKED BETWEEN THEM. Peggie Spencer and John Mazziotta were both professional photographers when they met while working for the Fort Worth Star-Telegram in the late forties, and soon they were husband and wife too. They shared an artistic eye, a strong work ethic, and a fondness for the adrenaline rush, characteristics that made their work regular front-page material for the Dallas Morning News in the fifties and the Dallas Times Herald in the sixties. Between them they captured the memorable faces of the region and the era—Lyndon and Lady Bird Johnson, Tom Landry, Amon Carter, Lee Harvey Oswald.

True to the values of the day, John was often tapped to snap sporting events (including most games of the Cowboys and the Texans, Dallas’ two pro football teams), while Peggie inevitably drew women’s-page assignments. But both covered general news events as well. John, who died in 1989 at the age of 73 (after the couple had divorced), chronicled the aftermath of the tornado that tore through Dallas in 1957, killing ten, and he was one of the few journalists who, in 1963, managed to sneak a picture of Oswald. Peggie, who is now 75, started working while still in high school. She always juggled two or three assignments a day, regularly changing hats—or more. “Once, the rodeo was on,” she recalls, “and I photographed a lot of 4-H kids with their livestock. After that I had to go out to the country club. And I remember I had to call my mother to bring me a change of clothes, because what I wore to the rodeo was definitely not appropriate for the country club.” She met LBJ when he was still only a senator. After she attended a political meeting—”The only girl among about, oh, five hundred thousand men”—Johnson came up and apologized for one speaker’s risqué humor, because he had used the words “girdle” and “bra.”

The Mazziottas’ collective work endures as a chronicle of the city’s social and political ups and downs, from fifties-era high life to post-assassination trauma and beyond. Here are eight of their photos from the sixties, a time of increasing complexity and maturity for Dallas.

View these photos by purchasing the September issue available on newsstands now. Due to copyright restrictions, we are not able to display the photos on our website.

1964 As the Fab Four disembarked at Love Field on the next-to-last stop of their first U.S. tour, John Mazziotta was there with camera in hand. The quartet sported cowboy hats, a welcome-to-Texas gift, but were clearly overdressed for the state’s early-fall heat. Mazziotta was then 47, too old, no doubt, to value such proximity to the British heartthrobs (and probably too used to shooting celebrities to care much one way or the other). That night, the Beatles played at Dallas Memorial Auditorium to a sellout crowd of 10,500 fans, each of whom paid from $2.50 to $5.50 for a seat.

1963 In a 1980 interview about the Kennedy assassination and its aftermath, John recalled how he lucked into the opportunity for this picture. In the downtown police headquarters, he said, “a hundred visiting photographers were barricaded and kept out of this [back] room. I managed to duck in the back room and caught him on the police elevator going up to the jail.”

1960 Peggie Mazziotta, a regular freelancer for Neiman’s, took this portrait of the tasteful twosome dressed to the nines during the store’s annual Fortnight celebration. The Dallas stylemaker presented the Neiman Marcus Award to the singer and actress in recognition of her fashion savvy.

1960 Peggie’s editor dispatched her to shoot pictures of Lady Bird Johnson, Ethel Kennedy, and Eunice Shriver, who were in town for a campaign rally with John F. Kennedy. She dutifully shot the women, then spotted a huddle of men surrounding JFK, whose hair was speckled with confetti he hadn’t bothered to brush out. “When I saw him,” she says, “I moved around to get a picture of him for myself. There was an aura about him. I told a friend, ‘I think there are stars in his eyes instead of just a simple reflection.'” Peggie’s single shot of Kennedy with his mentor Rayburn, his running mate, Johnson, and an unidentified aide went on to win the National Press Photographers Association’s political picture of the year.

1960 Socialites fluttered around the German-born actress at a private party to which Peggie had been invited. “That’s one thing about doing women’s news,” she notes. “People get to know the photographer, and then they call you.” Dietrich was in town for her one-woman show at the State Fair Music Hall. “Notice her arthritic hand,” Peggie says.

1960 The singer and comedienne’s one-woman show was one of the year’s Dallas Summer Musicals. Remembers Peggie: “She was so lively, it didn’t matter that I had to shoot her in her hotel room. I had my six-year-old daughter, Jan, with me, and Jan called her ‘Charol Canning.'”

1961 An eighty-year-old woman was the subject who affected Peggie most profoundly. She photographed Keller in the living room of Keller’s brother’s house, in Dallas, where she had spent the winter. “You wouldn’t believe what it was like to be in her presence,” Peggie says. “When I walked in, she called me ‘Mrs. Mazziotta’ and pronounced it correctly. She talked about what a lovely day it was, with the birds singing and the flowers blooming. It was a spiritual experience.”

1960 Campaigning doggedly throughout their home state, the vice-presidential candidate and his wife were confronted in Dallas by an angry mob of political extremists. John, working his way through the downtown throng, managed to snap this powerful image, showing Lady Bird reflexively raising her hand and LBJ protectively grabbing her arm as the couple reacts to the jeering, spitting crowd.