Pole vaulting is considered to be one of the more dangerous and skill-intensive of the track and field events, and this past weekend, a legally blind sophomore—Charlotte Brown of Rains High School in Emory—took 8th place in the state competition held in Austin.

Pole vaulting requires an athlete to dash at top speed carrying a pole twice her height, to spear the end of that pole into a precise “box”, and then to launch herself, upside-down, into the air and over a crossbar. Brown can’t see the bar; in fact she can hardly make out the runway as she’s hurtling towards the end of it.

In order to keep herself on track, Brown lays an 80-foot carpet of artificial turf next to the vaulting lane that serves as a visual contrast of light and dark shades. She counts her strides as she runs and her coach yells out her distance as she approaches her goal. To put that in perspective, imagine driving at top-speed down a rural highway at night with no headlights. Now imagine hitting a launching ramp Evel Knievel-style, hurtling towards a target that you can locate only through intuition, and you might develop some understanding of Brown’s experience while pole vaulting. Suffice it to say, she’s got guts.

Brown, 15, developed infant cataracts at a young age and her vision has been deteriorating ever since. She has 20/400 vision in her right eye and a pinhole-sized field of vision in her left. She has no depth perception or peripheral vision. She compares her sight to looking through a tiny coffee stirrer, except that everything on the other side is blurry, flat, and colorless, wrote the Dallas Observer.

At the start of the event on May 11, Brown was awarded the National High School Spirit of Sport Award in the Mike A. Myers Stadium at the University of Texas, wrote the Matt Wixon for Dallas Morning News. Brown went on to compete in the 100-, 200-, and 4×400-meter relay, and was considered a favorite to win the pole vault. Her personal record is 11 feet 6 inches. Her best attempt at this meet was 10 feet 6 inches, after which she received a standing ovation from the crowd of 10,000, wrote Wixon. “That was a little overwhelming,” said Brown. “I didn’t know I had so much support.”

The New York Times recently ran a profile of Brown and Aria Ottmueller—another legally blind teenage vaulter, this one from Arizona. The pole vault is not an event at the Paralympics, the competitions for physically and intellectually disabled athletes. Mark Lucas, the executive director of the United States Association of Blind Athletes told the Times that, in his 20 years of experience, he has never encountered a vaulter of extremely restricted vision. “Pole vaulting is an absolute rarity because of the hand-eye coordination needed,” said Lucas. “What an incredible accomplishment.” 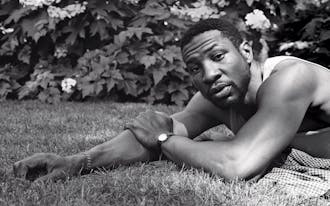