As executions go, Michael Yowell’s was not destined to be particularly notable. Fifteen years earlier, in Lubbock, he had been convicted of shooting his father and strangling his mother while trying to steal drug money. He left a gas jet on, which set the house on fire, and his grandmother, who could not escape, died in the blaze.

His appeals were exhausted and on October 9, 2013, he became the fourteenth lethal injection in Texas of the year, number 506 since executions resumed in 1982 (number 507, of Jamie McCoskey, is scheduled for tonight).

On the day of Yowell’s execution, roughly twenty devoted death penalty opponents were found practicing their ritual protest, standing outside of the Walls Unit, the state’s oldest prison, as a show against capital punishment. The regulars—many of whom had driven in from Houston and its suburbs of Spring, Tomball, and Magnolia—spent the evening milling around near the cluster of prison buildings surrounded by high brick walls as a few officers in blue and grey uniforms stood guard behind a string of worn yellow caution tape.

At around five in the afternoon, Dennis Longmire stepped out of his car, holding a tall votive candle with a sheet of paper wrapped around to protect the flame from the wind. Longmire has stood vigil at nearly every execution since 1984, when he moved to Huntsville to teach criminal justice at Sam Houston State University. Soon, other protesters began to arrive. Gloria Rubac from the Texas Death Penalty Abolition Movement walked around greeting the dozen or so people that were all wearing anti-death penalty t-shirts. She handed out signs bearing messages that were obviously tailored to this particular execution’s news angle.

Many executions come with a hook—the condemned faced racism at trial or is mentally ill. On this day, it’s all about the lethal injection drugs. The Texas Department of Criminal Justice has recently been facing a shortage of pentobarbital, the drug used in lethal injections, and last month, it was revealed that the TDCJ had turned to a compounding pharmacy in Houston to custom-make more of the drug. The department promised the pharmacist that all would be kept on the “down low,” but then, the Associated Press published the pharmacist’s name, and he started receiving hate mail and phone calls. He requested the drugs be returned, to no avail.

Rubac, a retired elementary school teacher who has protested hundreds of executions, showed off the sign she made special for Yowell’s execution: “TDCJ: Looking for Drugs in All the Wrong Places.” Sitting nearby was Joanne Gavin, an octogenarian from Houston who has been campaigning for liberal causes for most of her life (“I’ve walked with picket lines in many a time, and in many a place.”) She held up her own weathered sign: “Honk to Stop Executions.” Several people blurted their horns. Rubac shouted and tried to shame the correctional officers outside the prison. For years, her primary tool was a megaphone, “much to the consternation of Dennis Longmire,” who is no fan of the device. He prefers a quiet vigil to all the shouting and shaming.

The difference is not just one of style. Longmire sees Rubac’s tactics as “counter-productive” since the correctional officers standing outside the prison “are not decision makers.” The state capitol in Austin, he argues, is the “logical place for the noisemakers.” He deems her regular declarations that Rick Perry is a serial killer “absurd.”

“In many ways,” he said, “it gives the people who are there reason to dismiss our presence there trivial and insignificant.”

Rubac defends her use of the megaphone. “I’d think if I were being murdered,” she told me, “I’d want somebody screaming their head off to make it stop.” She’ll turn it off once the family of the condemned enters the prison, and if they’ve requested silence, she won’t use it at all.

Earlier this year, Rubac brought a microphone and speakers, which were even louder than the megaphone. It echoed off the prison walls and into the nearby neighborhood, until the wind blew it over. “I told her one of my prayers had been answered,” Longmire recalled, “and she laughed.”

Perhaps the clearest delineation of their difference is that Longmire tends to say, “we’re executing” with a solemn awareness of his role as a citizen of the state. Rubac tends to say, “they’re executing,” with bitterness in her voice.

But despite differing styles, both groups agree that they’re all on the same side. “We all get along fine,” explained Kelly Epstein, who tends to keep quiet with Longmire. “We all want the same thing.”

As the evening progressed, Rubac announced to the crowd of roughly twenty that a higher court has not yet officially rejected Yowell’s appeal. Melissa Monti, a friend of Yowell who has visited him on death row for years, stood with the protesters. Her young son, who wore a Teenage Mutant Ninja Turtle costume, tugged at her jeans. At around 6:40, family members of Yowell crossed the street, indicating that the execution would soon begin.

A handful of local college students were parked nearby and took in the scene from the back of their pickup truck. One of them, a criminal justice major, would get extra credit for writing about his experience outside the execution. They were all generally supportive of the death penalty but also cordial while chatting with the protesters. They had one main question: where was the pro-death penalty rally?

In 1982, at the first execution after an 18-year pause and the reorganization of laws surrounding the punishment, dozens of pro-death penalty protesters came out, spurring Rubac and Gavin to start a counter-rally. But the majority of Texas voters and elected officials support the death penalty, so there is little reason these days to rally in its defense. In the past, when there were groups of supporters, guards sent them to the other side of the entrance, a fair distance from Rubac and the others. This was not the result of an “official policy decision,” according to TDCJ spokesman Jason Clark. Even the longtime regulars don’t remember how it started, though it may be traced back to the execution of Gary Graham (who had changed his name to Shaka Sankofa) in 2000. His supporters, who included Black Panther party members, almost got into a scuffle with a Ku Klux Klan contingent. The authorities erected official gates to separate the two sides.

That kind of thing is rare, but this hot-button issue still gets hackles up. According to the regulars, sometimes people drive by and shout “Fry ’em” or “Burn the bastard!” or simply shake their head in disgust. “There have been shouting matches,” Longmire said. “I was spit upon.”

Some reactions are more ambiguous. As we stood waiting, a car passed by with a young boy in the back seat. He squinted at the protesters and their signs and then spoke to his mother. Longmire said this is a common sight and he wonders how the parents respond. “I am constantly contemplating that conversation in the car.”

Executions can take as little as twenty minutes, and by 7:15pm — a half hour after the witnesses entered the prison — we were still waiting for Yowell’s family members to come out. Rubac speculated that maybe the new execution drug was not working.

It was. The door opened and everyone abruptly quieted down. Forty feet or so in the distance, we saw department spokesman Jason Clark ringed by the glow of a camera light.

“So now they’re going to say the drugs worked. Congratulations, you murderers!” Rubac said, her voice rising to a shout. “Oh big news! We’ve got a new drug to kill with!”

She turned to Monti, Yowell’s friend, whose eyes were red and puffy, and her voice turned calm. “Tell his family a lot of us came out.” 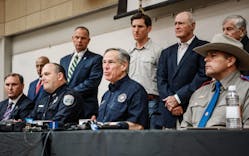