Guess we have to score this one, Hudspeth County Sheriff’s department 2, Fiona Apple 0.

[Fleming’s letter] starts off … “First, Honey, I’m already more famous than you, I don’t need your help. However, it would appear that you need mine.”

The letter continues, “Two weeks ago nobody in the country cared about what you had to say, — now that you’ve been arrested it appears your entire career has been jump-started. Don’t worry Sweetie, I won’t bill you.”

“Next, have you ever heard of Snoop, Willie or Armand Hammer? Maybe if you would read something besides your own press releases, you would have known BEFORE you got here, that if you come to Texas with dope, the cops will take your DOPE away and put YOU in jail.”

“Even though you and I only met briefly in the hallway, I don’t know you but I’m sure you’re an awesome and talented young woman and even though I’m not a fan of yours, I am sure there are thousands of them out there, and I’m sure that they would just as soon you get this all behind you and let you go back to what you do best—so my last piece of advice is simple “just shut-up and sing.”Sincerely
Rusty Fleming”

Fiona Apple made it to her show at the Bayou Music Center in Houston Friday after an unscheduled tour stop arrest at the infamous Sierra Blanca customs checkpoint where she was busted for possession of hashish and marijuana last week.

Having been forced to cancel her September 20 show in Austin, it was the quirky singer-songwriter’s first public appearance since the arrest, and sure enough, she took a few minutes to talk ramble about her treatment in Hudspeth County to the audience.

At the Houston Press, Neph Basedow characterized Apple’s comments as “a personal vendetta of sorts.” Among other things, she claimed that some people associated with her arrest, acted in an “inappropriate and probably illegal” manner.

“Now, most of the people were very nice to me. There are four of you out there, and I want you to know that I heard everything you did. I wrote it all down with your names and everything you did and said stupidly thinking that I couldn’t hear or see you. I then ripped the paper up, but not before I encoded it and– I got two lock boxes. We’ll call them “holding cell one” and “holding cell two”. In “holding cell one” is the encoded version of the shit that you did that I know was inappropriate and probably illegal. In “holding cell two” is the decoder. I’m the only one who holds the key, and you and I will be intimate forever because I will hold that secret forever. Unless of course the celebrity that you had so much interest in but you wanted to accuse me of bringing up while you laughed at me all night? Unless you’re interested in being a celebrity, I’ll make you f**king famous any time you ask and I’ll open those boxes. So why don’t you stay in your f**king holding cell?”

TMZ called it her/the “most bizarre speech ever,” which means whoever wrote that headline was born too late to have seen the 1997 MTV Video Music Awards.

Apparently referring to Willie Nelson’s Sierra Blanca bust, Grantland’s Molly Lambert suggested that devotion to the bud could help inspire Apple to expand her sonic palette: “The good news is that if she ever feels like seriously switching things up in the future musically, she’s just laid the groundwork to reinvent herself as an outlaw country star.”

Of course, Snoop Dogg (er, Snoop Lion?) was also arrested there, so couldn’t Apple just as easily become a hip-hop star? Or be in a film with Armie Hammer, who was also popped at the checkpoint?

But the most, shall we say, original take on Apple’s arrest comes courtesy of Opposing Views (indeed!), whose Angela Bacca suggested an Arizona immigration-style touring artist boycott of South By Southwest:

South by Southwest (SXSW) in Austin (albeit nearly 500 miles away) brought in almost $167 million last year for the city— about 70% of its yearly revenue. What if the entire line-up this March stood in solidarity with Fiona, Snoop and Willie and decided to boycott all concerts and appearances in the entire State of Texas until Hudspeth agreed to pursue the crime actually occurring in its hell-desert instead of celebrities and musicians who bring buckets of joy and money into the State? What if there was no South by Southwest this March? How long would it take for the City of Austin to come down hard on Hudspeth?  Perhaps they can sue the small county of Hudspeth for lost revenues if, in fact, no musicians decide to play SXSW out of principle next year.

Hmmh. What was Bacca smoking when she came up with this idea? 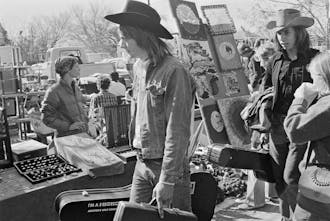