Khalid’s upward trajectory has been a heck of a thing to watch. In 2015, he was a new arrival to El Paso, starting his senior year in high school. The summer after he graduated, he had a single, “Location,” on the top 20 Billboard charts and was hard at work on his debut album, American Teen. That album, released in 2017, went on to be certified double platinum in the U.S. and earned Khalid five Grammy nominations, including one for Best New Artist.

I want to go to the Grammys one day.

He spent 2018 basking in his success, headlining tours at legendary theaters like Radio City Music Hall and Red Rocks; recording an EP, Suncity, named for his adopted hometown; and collaborating with a slew of fellow up-and-comers and established superstars, from Billie Eilish and 6lack to Martin Garrix and Kendrick Lamar. He stayed quiet about a second album.

That changed today with the release of “Talk,” the first single from Khalid’s as-yet-untitled sophomore release, which will be released in April. The song seems to bring together the best of Khalid’s work over the past three years. Like the songs he recorded back when he was an El Paso teen, “Talk” features his rich voice opining about young love and relationships over a poppy, synth-heavy beat; like the songs he recorded after reaching stardom, it’s a collaboration with one of music’s biggest names. In the single, Khalid taps the talents of British electronic duo Disclosure, a super-producer team, signaling that the sophomore album looks to go even bigger than American Teen. While the song isn’t as immediately infectious as some of the hook-heavy singles that buoyed his debut to the top of the charts—he doesn’t attempt a chorus as catchy as the one on “Young, Dumb, and Broke” or “Location”—that feels like a calculated move, highlighting the artistry he’s developed as he’s grown from a teen sensation to an established artist looking to cement his place as a star.

There’ll be a time for undeniable radio hooks later on. (Khalid turns 21 next week.) Reintroducing himself as a solo artist, with his signature sound and the backing of the biggest stars in the game, seems like a fine way to announce the long-awaited follow-up. 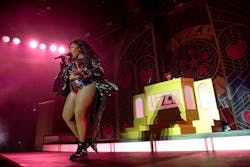