Last weekend in Dallas, Post Malone held “Posty Fest,” a day-long celebration in his hometown of Grapevine, where the son of a Dallas Cowboys executive first fell in love with hip-hop. The festival—which featured a performance from the rapper and opening appearances by fellow superstars Travis Scott, Tyler the Creator, and more—was a hit with its intended audience. The young fans who’ve made Post Malone (né Austin Richard Post) the breakout star of 2018 turned out in droves, gushed about it on social media, and otherwise celebrated the 23-year-old. Most of the music critics in attendance seemed impressed too. The Dallas Observer signed off its review by waxing that the festival served as “a culmination of all the work Austin Richard Post has put in to become one of the biggest artists in the world, with no limits in sight.” The Dallas Morning News declared that “the inaugural event quickly proved to be something special.”

It wasn’t all coronations and congratulations though. Writing at the Washington Post, music critic Jeff Weiss authored a takedown of Malone—his music, his festival, his persona, and his very existence—that quickly went viral. Music Critic Twitter gleefully spread the review, which often read more like a pursuit of colorful of ways to say that Post Malone sucks, while a Reddit thread about it garnered more than 900 comments in less than 24 hours.

It’s easy to see why Weiss’s takedown got so much attention. Post Malone is an artist whose work can certainly be described as “problematic” (to put it mildly), yet who’s skated by on his way to mega-stardom without much scrutiny. The review aims to correct to that, offering a whole lot of satisfying lines about the rapper. If you’ve been baffled about how this guy ascended to international fame, seeing him described as “a rhinestone cowboy who looks like he crawled out of a primordial swamp of nacho cheese,” and his work accused of having “the creative tension of associates at a downtown law firm complaining that $150,000 a year just doesn’t cut it” could offer some relief. It’s a schadenfreude-laden call out of the fact that hip-hop’s unlikely boy emperor is indeed not wearing any clothes, just a bunch of face tattoos.

And, to be certain, criticism of Post Malone is warranted. He’s ascended to the top of the rap charts despite displaying a shallow understanding of what the art form is capable of. “If you’re looking for lyrics, if you’re looking to cry, if you’re looking to think about life, don’t listen to hip-hop,” he told a Polish news organization, further explaining that for emotional content, he prefers Bob Dylan. (He blamed the statement on a beer tasting that he said occurred during the interview, a claim the outlet denied.) He responded to critics who accused him of appropriating black culture by lamenting that there’s a “struggle being a white rapper.” Instead, he told GQ, he wants to be seen as just “a person that makes music,” the sort of free-floating identity that black artists who want to be seen as something other than just a rapper rarely have access to.

His festival would have been a lonely affair if not for the black rappers who performed, and he’s traded on the appearances from black artists on his record as a way to build his credibility—yet he also wants distance from the genre whenever it benefits him. There’s an entitled have-your-cake-and-eat-it-too expectation from Malone that only makes sense if you have the luxury of never thinking critically about race, and Malone is the rare sort of rapper who has received the opportunity not to think about it. So when Weiss writes, “He’s reaped the extreme benefits of a system that allowed him to flourish yet asserts his privilege to remain purposefully ignorant. He knows he won the lottery but doesn’t understand that it was rigged in his favor,” it’s a satisfyingly insightful reproach of someone who should be thinking about that stuff.

Weiss is also right that other white rappers who’ve topped the charts have not taken the same approach to working in an art form created by black artists. Eminem struggled with the fact that his success was driven by white audiences feeling more comfortable with him than with black rappers; Macklemore performed his white guilt both via his music and through social media; Vanilla Ice had the decency to slide into irrelevance almost immediately after his lone hit.

But at the same time, there’s something about Weiss’s write-up that almost makes Malone seem like a victim. It’s not that he’s wrong in his criticism. It’s that he unloads on Malone with such abandon that he fires off one meaningless cheap shot after another, only occasionally scoring a direct hit. He spends more than 2,000 words lambasting Malone not just for appropriation, but also for, uh, being a “greasy discarded barbecue wrapper” for his appeal to “fifteen-year-old blond girls in Daisy Dukes and ‘Champagnes and Blunts’ shirts” who, in another time, would have been cheering the Backstreet Boys or One Direction. He goes after Malone for recycling applause lines that he’d used at previous performances—as if no touring artist worth respecting has ever introduced a song with the same line night after night—and for writing songs “presumably made for streaming at the Wahoo’s Fish Taco kiosk at LAX.” A lot of the zingers feel like the sort of thing that’s fun to write, but they don’t really tell us much about what Malone actually does wrong. Describing the acoustic moment in his set as “like Bon Iver cosplaying as Bon Scott right before he tried to drink himself to death” is a clever bit of repetition, but what the hell does it mean? It’s the sort of line that might have been sitting in a notebook for the past three years, waiting for the right target. For what’s ostensibly a review of a festival, a lot of what Weiss has to say reads like it might well have been written on the plane ride to Dallas.

At the same time, Post Malone doesn’t need—or deserve—a robust defense. It’s just that he doesn’t deserve to be the subject of every ounce of vitriol a writer has been saving up for just such an occasion. Yeah, Malone’s a culture vulture; and yeah, his fans probably do drink a lot of Rockstar Energy drink; but what does one have to do with the other? More to the point—when you go after him for the latter, you actually blunt the impact you’d have when you call him out for the former. Ultimately, it doesn’t matter if Post Malone deserved or not to be the butt of so many cheap shots. Part of his job involves opening himself up to criticism, even the mean-spirited kind. But the points that were worth making in the Post‘s post about Post did deserve to be taken seriously. That’s harder to do when the author of a takedown is busy comparing the rapper to a tub of nacho cheese. 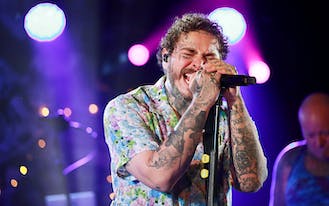 He’s the One Who Likes All Their Pretty Songs: Post Malone Performed a Nirvana Cover Set