Just last week, we published an article spotlighting an analysis showing that the Longhorns could end this season with an undefeated 12–0 record. College football analyst Dave Bartoo fed reams of data into his computers, and the Longhorns came out as one of a handful of supposedly platinum-standard schools.

Bartoo and his computers claimed that though UT’s schedule was the eleventh-hardest in the nation, it was also the thirteenth-most “winnable.”

Bartoo concluded that this could finally be the year Texas slew the dragons that had beset it since the fifth play of that tragic national championship game against Alabama in January 2010. This would finally be the year when the Longhorns became relevant again, vanquishing the ghosts of Mack Brown’s long slide into mediocrity and Charlie Strong’s disastrous three years at the helm.

It sounds nice. But all of that research is already moot. Less than 24 hours after we posted the piece, Texas—a two-touchdown favorite going into their Week 1 game—fell to Maryland, a tragically scandal-ridden program with no real football history that is currently working under an interim coach (a coach who was fired as offensive coordinator by Ed Orgeron at LSU, the same coach the Tigers settled for after failing to land Texas’s Tom Herman two years back).

And yes, really. Texas lost to the friggin’ Terrapins for the second year in a row.

Not that many rational observers were expecting it, but let’s make this clear: Tom Herman will lift no crystal football come early next year, and now there is a very real possibility that the Longhorns might not win any more than one of their next five games. There’s a supposed gimme versus Tulsa (a team Herman’s Houston Cougars had a hard time dispatching just three years ago on Houston’s home field), and then a murderer’s row of TCU, Oklahoma, USC, and Kansas State.

So with the benefit of a terrible game’s retrospect, I’d like to do my own season outlook using Bartoo’s TLC (talent, location, and coaching) formula. (And please note: this is not to throw a whole lot of shade his way, nor ours, because we simply reported what Bartoo’s computers told him, and there seemed to be a lick of sense to those reports at the time. His optimism only slightly exceeded that of many Longhorn fans.)

Citing past recruiting rankings, Bartoo claimed that the Horns had outrecruited everyone on their schedule, barring USC and Oklahoma.

“When you have more talent, you’re going to win the game, 80 percent of the time,” he adds.

Hasn’t worked that way for Texas, at least not since 2010. Although Mack Brown’s final recruiting classes entered UT with glittering high school resumes, relatively few of them ever drew NFL paychecks (compared to his earlier years) and none won a conference title or competed in a major bowl. In 2014, no Texas player he recruited was drafted; in 2016, only one was.

Charlie Strong’s first batch of draftees numbered four, with three more making either the 53-man rosters or landing on injured reserve, so the talent, at least as assessed by NFL scouts, had improved, even if the on-field results had not.

And there’s the rub: it’s not necessarily about how good the guys look coming out of high school. It’s about how well they play in college—together. And that bunch Herman rolled out against Maryland did not live up to their press clippings, certainly to that “80 percent” level.

This year, the Horns tangle with USC in Austin. After coming close to toppling an allegedly superior squad in Los Angeles last year, Bartoo believed that the Horns could make it happen at Royal-Memorial this time around, even with USC’s slight talent advantage. (Again, based on recruiting rankings.)

Also, there are no trips to Fort Worth or Morgantown, West Virginia, this year; and as for the latter, for Longhorns fans like me, thank God for that. That place always seemed more like Mordor than any other destination in American college football, a gloom-laden purgatory of perpetual dismalness lit only by the couches the Mountaineer partisans torch in the streets after big wins.

So having them at home is a good thing, and the Horns get TCU and USC in Austin this time around. And again, OU is at the Cotton Bowl as usual, and that game is often a coin flip because both teams are so amped.

Bartoo also said that if Texas were to play USC in L.A. he would have circled that as the Horns’ only loss. Now that that’s already out of the way for Texas, I guess, 11–1 is still possible. Like, theoretically, it is still a thing that could conceivably happen, like my cat could turn into a dinosaur.

Longhorn fans were casting blame for Maryland not only at Herman but at Tim Beck, who is yet another in a long line of very unpopular offensive coordinators. And yes, some of the play-calling and personnel moves were bizarre, but it’s hard to lay the blame on Beck’s offense, which after all put 27 points on the board. (With Todd Orlando’s defense adding two via a safety.)

But let’s talk about the elephant in the room: Is Herman worthy of the Golden Boy of Coaching status he had at the end of 2016? And if he’s not, is it because he is fools’ gold in a headset or because the Texas program is utterly dysfunctional?

Let’s briefly look back over the past two decades of Longhorns football: Mack Brown took the program to heights unreached since Darrell Royal’s glory days, and then he plumbed it into depths not sunk to since Lord knows when. He then left Charlie Strong to try, and ultimately fail, to pick up the pieces of a shattered program.

Strong walked into a difficult situation. The only viable quarterback Brown left behind had a career-ending injury two games into his tenure, leaving two full years of eligibility on the table. Elsewhere, there was a lot of dead weight on the roster—guys who could not obey simple rules, the same ones in place at every school. And in some games, the officials were not kind.

By the end of Strong’s second bad year, in 2015, Herman had already emerged as his potential replacement. But with his own self-touted Mensa IQ, his pedigree working under now disgraced Ohio State coach Urban Meyer, and his Houston Cougars team (briefly) overachieving, he was anointed as the Chosen One by certain people in the inner circle of then-interim Texas athletic director Mike Perrin.

The Herman-to-Texas deal seemed inevitable, even as embarrassing losses piled up for him at UH. There was a disaster versus Navy in Annapolis, chalked up to bad weather (it was about 40 degrees and raining), and another against lowly SMU, a team Herman had taunted earlier.

Nevertheless, despite Herman’s Cougars finishing tied for third in the weak American Athletic Conference, adjacent powerhouses Texas and LSU were slavering for Herman’s services, with Texas finally winning out.

And so far? Herman’s first year was marginally better than Strong’s, but this season is off to a shaky start. And, unlike Strong, though even Strong’s detractors recognized that he came across as a good guy—if “over his head”—in press conferences, the needy Herman is not so well liked. Like Strong, he is also being shellacked for being “over his head” on the field. His press conference demeanor seems condescending, especially when defending his seemingly bizarre personnel decisions and play calls.

He’s now losing both the games and the press conferences. It took about two years for Strong to lose both the fans and the media, but Herman’s arc is sped up with regard to the latter.

I’ll just leave it at that, in terms of regional media. National podcasters, neutral observers,  those who staked some of their credibility in Texas as a ten-win team almost as enthusiastically as Bartoo, were disappointed and even “disgusted,” as it was put by Stephen Godfrey of Podcast Ain’t Played Nobody. Against his better judgment, Jason Kirk, Godfrey’s boss at the SB Nation Network, also predicted a big season for the Horns, even though they had failed to live up to his predictions for years.

Texas is making really smart NCAA football observers like those two look stupid, and while they are not punching holes in walls about it, they are not happy having that on their records, either. And there will come a time, and it will likely be soon, when few prognosticators will foresee good seasons ahead for Texas at all. It’s already happened to Florida. Hello, irrelevance.

“And that’s fair,” as Brown used to say while enduring whirlwinds of blistering criticism after losing to Oklahoma again by a score like 90–3. It is fair to for neutrals and partisans alike to be disgusted by a team with Texas’s resources that loses to Maryland, with an interim coach, at a neutral site.

And how did that happen? Is it that the university’s big money donors think too much of their own football IQs? Is it that Texas high school recruits are overrated by the national services that feed into Bartoo’s programs, thus skewing his algorithm? Why, after winning a national championship in 2005 and competing for another in 2009, is Texas still so dang bad? Despite all that money pouring into the program, its Edenlike setting right in the middle of Austin, and its certified status as a pipeline to the NFL?

Okay, back to Old Testament fire, if not the actual Bible, in an attempt to get into the head of Herman.

I must return to that great prophet Eminem:

Yo
His palms are sweaty, knees weak, arms are heavy
There’s vomit on his sweater already, mom’s spaghetti
He’s nervous, but on the surface he looks calm and ready
To drop bombs, but he keeps on forgettin’
What he wrote down, the whole crowd goes so loud
He opens his mouth, but the words won’t come out
He’s chokin’, how, everybody’s jokin’ now
The clocks run out, times up, over, blaow!

In 8 Mile, Em corrected his early errors, harnessed his swagger, tamed his insecurities and jitters, and won out. Likewise with Brown, who after a short, post–John Mackovic honeymoon, weathered an all-out blitz on his coaching ability before he finally took UT back to the promised land.

Can Tom Herman do the same? Time will tell, but right now he has neither the on-field results of Brown (who transformed a losing team into a winner in his first year) nor Strong (who was at sensible enough to accept his own mistakes and not cite bizarre John Steinbeck passages at his press conferences). 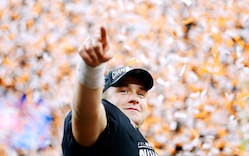 Did We Just Witness the Biggest Longhorn Victory of All Time? 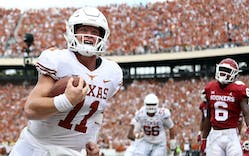 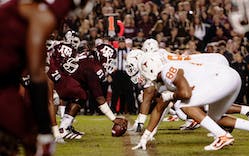