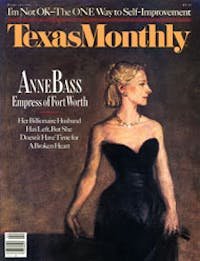 The rose window at the San José Mission in San Antonio is known as much for its mystery as for its beauty. First of all, the window isn’t where it’s supposed to be. You’d expect something known as the finest example of Spanish colonial ornamentation in the United States to be situated above the entrance to the mission’s main church, keeping company with the glorious carvings of pious saints. An oval portal has that position of honor; the Rose Window, an elegant anomaly on an otherwise barren wall of worn and crumbling stone, adorns the sacristy around the corner. No one knows why the window is so ornate—sacristy windows are traditionally simple—and no one knows what it was used for; steps inside the sacristy leading up to the window suggest only that someone might have preached a special service from its height. No one knows who made the window or how it got its name, either. The Rose Window, it can be said with certainty, keeps its own counsel.

In its silence, it projects a beauty that manages to be both serene and eccentric. The Rose Window is imposing—nearly seven feet tall—but is set only four and a half feet above ground level, so it’s accessible. Four carved arches push their way out of a rectangle framed by two stolid columns, while limestone leaves laze across the stone like vines claiming a ruin. A wrought-iron grate of exuberant curlicues covers the glass.

It is known that when the Rose Window was made in the 1770’s, nothing of its scale and intricacy existed in the United States. The window embodied the extravagant dreams of the Franciscan friars who commissioned it. Traveling north from Mexico in search of converts, those men made few concessions to the frontier: They taught the Indians not just to farm, tan hides, and honor God but also to play the trumpet and violin. When it came to architecture, the friars wanted the mission’s stone carvings to be as sophisticated as anything found in New Spain and imported the finest Mexican artisans to do the work. “No one could have imagined there were such good artists in so desolate a place,” remarked one visiting friar in a letter from the mission.

The biggest riddle of all is why the Rose Window is so named. It is not, as is sometimes assumed, related in any way to traditional rose windows, the round, complex stained glass versions that bathe medieval European churches in comforting hues. San José’s window is proudly plain in comparison, and the light it throws is painfully sharp—a New World light, for people willing to see life as it is, not as it should be. It is also unlikely that the window is so identified because there are roses carved into the stone. Various theories over the years have posited that the plants are more likely to be pomegranate or acanthus.

For quite some time it was thought that the proper name for the Rose Window might be Rosa’s Window, in honor of a story that has been embroidered for generations. In the most elaborate version, a noted Spanish sculptor named Pedro Huizar, charged with carving a religious window at San José, instead used his considerable talent to carve a monument to his lovely sweetheart, Rosa. When the window was complete, he sent for his love—who died in a shipwreck on her way to New Spain. Huizar spent the rest of his life celibate and penitent, carving the religious portal above the entrance to the church.

The story is nice but unlikely. According to a National Parks Service study completed in 1981, Pedro Huizar was born in Aguascalientes, Mexico; he was married twice and had at least three children. He did live and work at San José, but as a carpenter and a surveyor, and he didn’t get to the mission until the 1790’s, twenty years after the Rose Window was finished. The theory these days is that the window was named after Saint Rosa of Lima, the first saint of the New World.

But if the Rose Window is deceptive, it is never false. The truth is that the truth long ago ceased to matter. Around the turn of the century, copies of the window began appearing all over Texas (eight rose windows adorn the old Joske’s store in downtown San Antonio) and as far away as San Francisco. People still tell and retell the legend with great pride and affection, and the plaque beside the window at San José gives Huizar credit for creating it. In this way the Rose Window has become a monument not so much to love itself but to our need to believe in love, in its redemptive power and improbable tenacity, the way a rose—or even a pomegranate—might take root and thrive in the coldest stone.