Veronica Mars may be set in California, but you don’t have to look too far to see the show’s Texas roots. Creator Rob Thomas graduated from San Marcos High School and attended Texas Christian University, where he walked on to the football team, before transferring to (and graduating from) the University of Texas at Austin. What’s more, the original concept for the mid-00’s cult television series involved a teenage detective who solved crimes at Austin’s Westlake High School. Thomas also taught journalism at John Marshall High School in the San Antonio suburb of Leon Valley, and then at Northeast Early College High School in Austin.

While Veronica Mars isn’t the only show he’s found success with—his criminally underrated iZombie recently ended a five-season run on the CW—its cult status launched Kristen Bell’s career, and created a character that endured long after it aired. With the show returning for a fourth season—a surprise release announced at a Comic-Con panel today, more than 12 years after the end of its third season, and five years after a fan-funded feature film premiered at SXSW—we caught up with Thomas to learn how Veronica Mars is different from everything else he’s made, and why Landry is the only character he could have written on Friday Night Lights.

Texas Monthly: How much time do you get to spend in Texas these days?

Rob Thomas: Some of my best friends are here. My parents—our kids’ grandparents—are here. So I make it in pretty often. For four years, I commuted, which was incredibly hard. I would fly out on Monday morning and fly home on Friday night. And because iZombie was always a show that was on the bubble—if it had been a hit show, I would have moved back, because it was too hard of a lifestyle—but I was so afraid I was going to move back and then we’d get canceled. It’s much easier to live in Austin just writing failed pilots. (laughs) I could live comfortably here writing a couple of pilots that don’t get on the air, and I did for about three years. It is hard to live in L.A. on pilot script fees. So if that were going to be my lifestyle, I needed to do it here.

Texas Monthly: Veronica Mars started as a TV show. Now it’s a TV show, and a book series, and at least one movie. Did you ever think you were creating a franchise like that?

Rob Thomas: No. I am completely surprised by it. As a writer there is a part of me that, even as the show ended, knew that Veronica Mars would be on my tombstone. I’ve done a lot of television now, and it’s rare that you get the blend of things, like casting, that have to go right. I remember when I was here and I was teaching high school, I would watch movies or TV shows that are bad, I would think, ‘There are people getting paid a lot of money, and there’s a lot of talent out there, how do mediocre things happen? Aren’t there people watching this? Don’t they know that it’s mediocre?’ And sometimes that’s the point, to create something inoffensive—but after working in L.A. in the business for a few years, I realized that it is a miracle when anything special happens. The number of hurdles, the number of choices, the number of people who have input on it, any bad decision that can destroy whatever magic chemistry it takes to make something land the way it does… So, the fact that I’m doing Veronica Mars now? I’m shocked at it.

You know, we just wrapped iZombie after five years, the longest I’ve ever had a show on the air. Could I imagine in 2032 picking up the ball on iZombie? No. There’s no way. And I don’t think that show’s in danger of that happening. But with Veronica Mars, on the last episode, I did not tie it up. I wanted people to want more when I wrote that. Kristen has said that she’ll do Veronica Mars into Murder, She Wrote. And I may take her up on that. We’ll have to see the appetite for that, but a great detective occasionally dropping in for a mystery? I could see that lasting for a while.

Texas Monthly: As someone whose pilots don’t all get picked up, and who doesn’t always have full creative control over everything, is Veronica Mars one of those things were people want your voice and creative vision on screen?

Rob Thomas: I still get notes from the studio, and from Hulu. It is at the point where I get the notes and, if I push back, I can get my way. There are a couple of songs that Hulu didn’t like this year, and I changed them out. But the position I’m in as a writer is a funny one, because I’ve never had a hit show. No one’s giving Shonda Rhimes notes. She is a hitmaker. No one is trying to fix her. She has whatever the magic touch is that makes a lot of people show up at a television screen. I’m in sort of a middle position where I’m a proven commodity who has not had a hit show. I’m not treated like a rookie, I’m not pushed around, but people certainly feel free to give me notes. And they sometimes feel free to insist on on those, when it’s something that is not Veronica Mars. 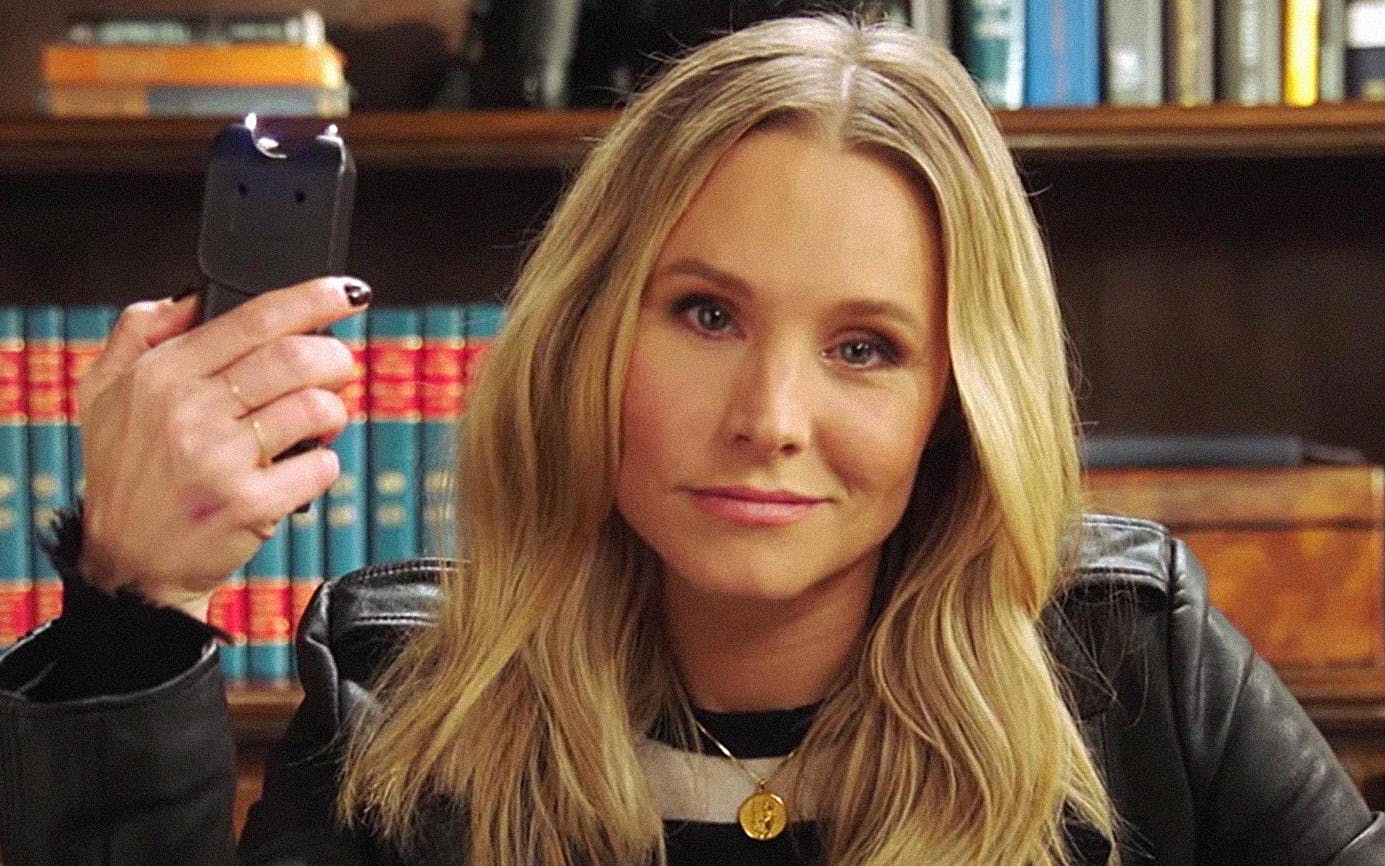 Rob Thomas: It’s certainly different on Veronica. And honestly, doing any pilot is madness, and they weigh in heavily, and audience testing means more to them than it should, and that’s always brutal. But once iZombie got on the air, five or six episodes in, it was a lovely experience. That five years was as happy as I’ve ever been in my career. It was a show where the cast adored each other, and were there on time and happy, and did a great job with a terrific crew and a studio and network that both liked what we were doing. Everyone wished we were a hit. I’m doomed to bubble shows. I want to know once in my career what it’s like to sit in my office to be like, ‘You know what? I’m going to put a nail in the wall and hang stuff up in here.’ It was actually really lovely this year to know that iZombie was going off the air and to be able to write to a conclusion. It was the first time I was able to do that.

Texas Monthly: iZombie had great chemistry with the cast, and they really knew how to deliver the kind of dialogue you write. Are those people you could see coming on to Veronica Mars at some point?

Rob Thomas: Oh, yeah. Yeah, because I love them. It’s well-documented that once I like an actor, I tend to bring them back. We were shooting both at the same time, so technically the iZombie cast would have been available for episode eight, the final episode, but I wasn’t going to bring one of them in to deliver three lines. All the good parts had been eaten up by the time of the last episode. But I love that cast. There isn’t one of them I wouldn’t go to, and quickly.

Texas Monthly: With this revival, how do you transition a teen show into one that could last until Kristen Bell is Angela Lansbury’s age?

Rob Thomas: I have some strong thoughts about how to do this revival. And I would consider these eight episodes as a bit of a bridge to how I want to do it. My thinking—and I could be wrong, but this is where my thinking is—is that it can’t continue to be part of a teen show. That seems obvious, none of them are teenagers, but it needs to become a detective series. What I’m thinking is Sherlock, to some degree the different seasons of Fargo—otherwise you’re relying on nostalgia. What I really want to do is replace Nancy Drew as the first name you think of when you think of female detectives. That is the long-term goal. When I say this is a bridge, there’s still some of that nostalgia in these eight, though not much. But I think any future incarnations are going to be ‘This is a detective show, this is your kick-ass noir heroine,’ and we can only survive going in that direction. I don’t know if that’s right or wrong, but it’s what I believe.

Texas Monthly: How do you engage with a 35-year-old Veronica Mars, when most of your time writing her has been as a teen?

Rob Thomas: The truth of it is that it now fits better, in its own way. The writing almost feels less stylized. When I was first in L.A., I went to a script store on Hollywood Boulevard, because I didn’t know what a script looked like, and I wanted to buy one. The first script I bought was Heathers. There is naturalistic writing, like Friday Night Lights—those kids sound like kids, they sound like real, honest-to-god teenagers—but on Veronica Mars, the dialogue is stylized. We let these teenage characters say the thing that, if you had a lot of time to think about it, if you were that pithy, as a 17-year-old… That sort of writing feels more natural coming out of a 35-year-old’s mouth than I think it did at 17 or 18. I’ve had people say to me over the years, ‘The teenagers you write sound so real.’ Yeah, I don’t know. They sound like pretty extraordinary teenagers to me. Adults are better-equipped to deliver this dialogue. I always wanted to keep it emotionally true, but I bumped up the level of repartee, and part of that is playing to your own strengths.

I was offered Friday Night Lights when it first got ordered, but it would have meant leaving Veronica Mars after season two, and that was my own show, even though we were on the bubble. Friday Night Lights appealed to me because it would have meant shooting a show in my hometown, I played high school and college football here, I love the book, I thought the movie was terrific. But I would have ruined that show. I was a fan of a show, I watched it—and I could have written Landry. That is the only character on that show I’d have had a handle on. I don’t do ‘brooding man of few words.’ That isn’t my forte. So I think it all worked out for the best. America got a much better Friday Night Lights, and I got to keep doing Veronica Mars.