For nearly fifty years America has survived with just one Big Mac, but McDonald’s is now asking if we need three. And they’re looking to Texans and Ohioans to provide the answer, so the slighter Mac Jr. and the jacked Grand Big Mac are being tested exclusively in the Dallas-Fort Worth area and central Ohio. As a native Ohioan who has lived in Dallas for the last fifteen years, I’m basically the target audience for this limited-time tasting.

I’m a food writer, so my attitude toward the Big Mac is supposed to either be smug disgust or sentimental nostalgia tinged with guilt. The problem is, I actually like them. I don’t go to McDonald’s often, but I’ll wolf down a Big Mac with fries and a Coke, without irony, a couple of times a year. On Monday, I ate three of them.

When I asked the cashier for every Big Mac on the menu, he smiled in a way that said, “We caught another one,” and three boxes were delivered on a tray lined with a photo of the same trio I was about to consume. The evaluation began with the unpacking. Single patty burgers at McDonald’s usually get wrapped in paper, so the box heightened expectations for the $2.39 Mac Jr. But under the lid it was more like a thin patty version of the Quarter Pounder, except with the shredded iceberg lettuce falling all over the place. This sauce-transporting flotsam is what makes eating a Big Mac in a car a precarious proposition, but the Mac Junior’s diminutive size makes it easier to handle. Still, the single thin patty gets lost in all the special sauce. The McDonald’s kitchen staff uses a calibrated special sauce gun (seriously) to ensure the proper amount is applied to a Big Mac, but they should look at recalibrating it if the Mac Jr. stays on the menu. It turns out you can have too much special sauce. 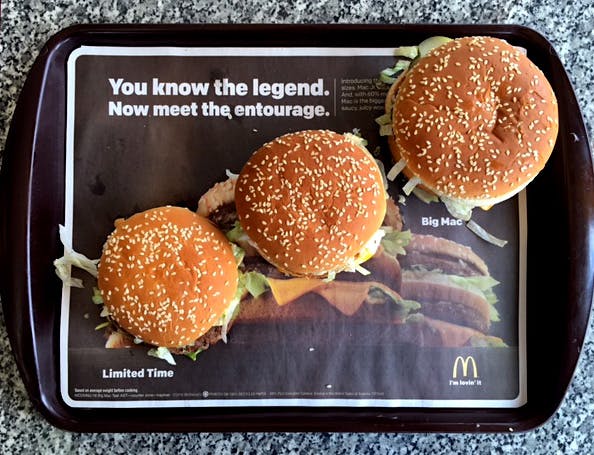 There’s something about the regular Big Mac’s ($3.69) proportions that are pleasing. It’s tall, with a compact circumference that I’ve always preferred over the Frisbee-like shape of the Whopper. That’s why I found the Grand Mac ($4.89) to be a dud. The two-patty, one-third of a pound Grand Mac keeps with the three buns on the original, but adds another slice of cheese and, er, a beefed up patty size. With all the slip-sliding of many layers on a larger bun, it was a literal flop. Also, the two slices of cheese doubled up on one patty is an easily fixable error. McDonald’s might think a bigger bun makes it Grand, but it’ll never compare to the Mega Mac (four patties) that I devoured in Canada after a seven day fishing trip that included smallmouth bass for breakfast, lunch, and dinner.

The rollout of the to-be-determined menu items could be an effort to compete against the rise of fast casual dining options that offer more customization in menu items. In the last quarter of 2014, profit for the Golden Arches fell a shocking 21 percent. Residents of the Metroplex (and Ohioans) have until June 6 for a taste test, after which McDonald’s will decide if a nationwide expansion is in order. After trying all three, I’d say the rest of America isn’t missing much. The mini version is lacking and kind of misses the point. If you’re going to eat a Big Mac, you might as well indulge on the classic version—but that might be the upper bound of burger consumption.