Minutes before “#BlackLivesMatter: New Solutions to Old Problems” kicked off at SXSW Interactive, Fatima Mann asked audience members what they hoped to get out of the session. For it being the first time that such a session was held, even in a smaller room in JW Marriott, it was completely packed. And people from the sardined audience wanted to know more about how the #BlackLivesMatters movement originated, what its activist actions looked like in Austin, and what they—as white people—could do to understand and be supportive. It’s worth noting that the majority of the audience, much like SXSW and Austin itself, was extremely homogenous. But even with a mostly white audience, the panel still provided more diversity than other SXSW Interactive sessions.

“I’ve been here for three days and this is the blackest room I’ve been in,” an audience member pointed out to the panelists.

That sentiment is a major focal point for Mann and Chas Moore, two of the founders of the Austin Justice Coalition, and the two speakers present at the panel. (AJ McQueen was listed as participant, but arrived too late to join in.)

“Austin is 6 percent black, due to gentrification, due to this mass production of cat cafés on the East Side,” Moore said, referring to last year’s destruction of a family-owned piñata store on East Cesar Chavez to build a parking lot for use during SXSW. Later, Blue Cat Café, where people can play with cats that are up for adoption, opened up on the site.

Although #BlackLivesMatter gained national attention because of police brutality, Mann explained that it has grown to touch all areas of systemic and institutional racism, from education to economics to health. In Austin, one of the major rallying points for black activists is gentrification. East Austin was known historically for its black and Latino families, the same people who were forced to move to there in accordance with the city’s 1928 master plan. The plan restricted resources for black and Latino families to East Austin and built I-35 as the dividing line of segregation. But now, as Austin is becoming the city everybody wants to live in (in large part thanks to festivals like SXSW), families that were first forced into the area are now being forced out. East Austin’s central proximity to downtown has made it the destination for richer white newcomers drawn by the city’s never-ending festivals and tech goodies, and Latino and black residents are now finding themselves unable to afford property taxes and forced to move to suburbs outside of Austin like Pflugerville and Round Rock. This makes Austin one of the only cities in the US that’s losing its black population, tough the general population increases. 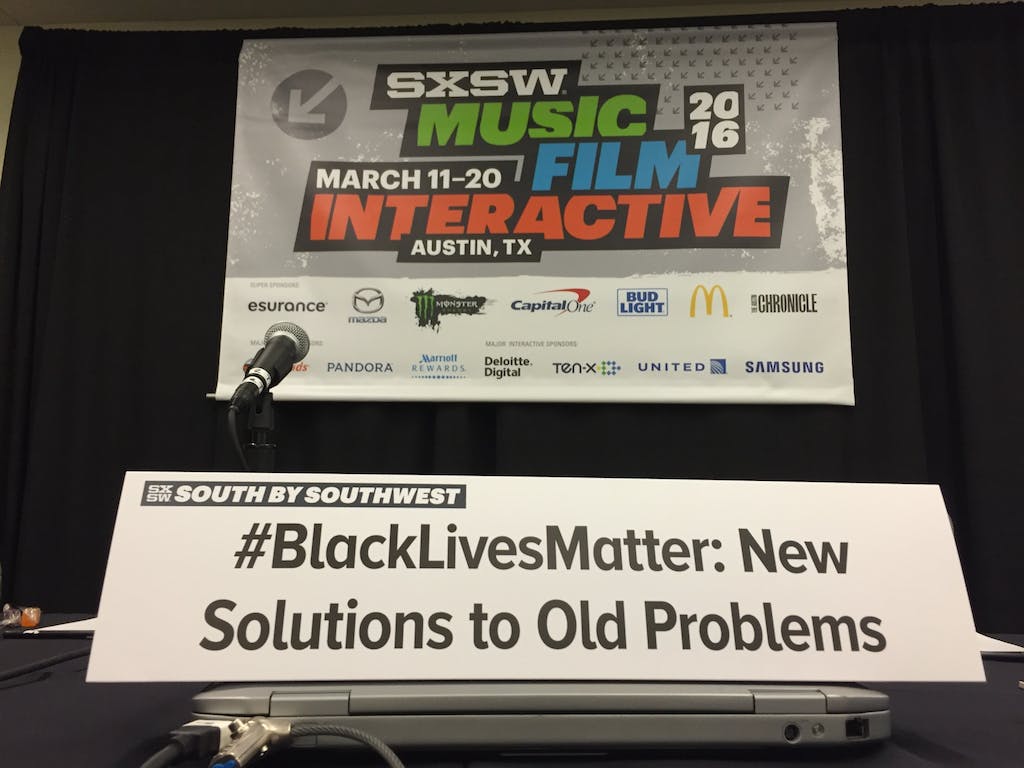 So what are Austin activists doing in the face in these depressing statistics? “We try to empower one another,” Moore said. They hold events such as Empowerment Week and recently had a tribute for the Victory Grill, a juke joint opened up in 1945 to provide a safe place for black soldiers and performers during segregation. Like many of the historically black sites in Austin, Victory Grill is also on the East Side. And when it comes to people “being pushed out systematically and economically,” Moore said activists “try to teach residents about the rights they have about property taxes.”

In addition to combating gentrification, David Joseph also became a rallying point for Austin activists. In February, Joseph was shot and killed by a police officer while he was naked and unarmed. Austin activists have responded by holding a vigil for Joseph during the first weekend of SXSW, challenging media outlets that depicted him as a “17-year-old man,” and demanding more transparency and accountability from the Austin Police Department. Moore seems positive about how APD has responded to that request.

As for SXSW, a conference full of mostly white people in a mostly white town that is pushing out its people of color, it’s important for those who consider themselves allies, or supporters of the #BlackLivesMatter movement, to know their role in the system.

“If you’re asking what our allies can really, really do, you can really start having these conversations with people who look like you,” Mann said. “White people listen to other white people, they don’t listen to us.”

For Texas’s Black Roller Skaters, Life Is Good on the Wood