Let’s face it – being the President of the United States sucks. No matter what you do, millions and millions of people will hate you. You can’t so much as step out your front door without an armed security detail as your shadow. Every day is a titanic battle pitting you against the gargantuan narcissistic egotists in Congress, the media, and the Supreme Court. You have to constantly suck up to donors or consign yourself to lame-o one-term status alongside the Franklin Pierces and Herbert Hoovers of the world.

On the other hand, you get to live in a cool house. And this being Texas, there is a replica of the 1600 Pennsylvania Avenue domicile that you can live in free of the responsibilities of high office. If you’ve got $5,995,000—$5,000 less than it cost to build a bionic man—you can reign in imperial splendor just southeast of Houston on the shores of Galveston Bay.

The home was built in 1927 by Humble Oil co-founder and future one-term Governor Ross Sterling. According to legend, an exasperated Sterling, tired of trying to explain his vision to architect Alfred C. Finn, whipped out a $20 bill, showed Finn the backside and said, “Just build me that!” Sadly, the story isn’t true, as the White House did not adorn $20 bills didn’t until after Sterling’s replica was built.

Sterling died in 1949 and stipulated in his will that his “Texas White House” be used as a home for wayward boys. The next twelve years were hard ones for the mansion. The double-size upstairs bedrooms were partitioned dorm-style and bunk beds were nailed to the newly painted hardwood walls. According to a 1987 Texas Monthly article, wastebasket fires were such a common occurrence upstairs the management had to install a fire hose.

In 1961, Houston banker Paul Barkley bought the ravaged home at the bargain-basement price of $92,000 and partially restored it to its Jazz Age glory, just in time for the dawning of the Space Age. Barkley and his wife loved to throw parties, especially for the astronauts based at nearby Mission Control: space cowboys John Glenn, Wally Schirra, and Alan Shepherd have all gotten their drink on in the house.

Tired of the upkeep, the Barkleys put the house on the market in 1972, and there it remained, baking in the Gulf Coast sun, for eight long years. People started calling it a white elephant, but then a mysterious French aristocrat bought the place in 1980. Although le comte never moved in, the construction magnate who bought the place a couple of years later did. The home has changed hands twice since then, and thanks in part to a 2014 remodel by the current owners, its appraised value doubled from $1.9 million to a shade under $4 million.

On to the tour…

To get the full White House effect, you have to approach by sea. The staircases and lowest level are made of granite blocks, and the walls of the upper stories are made of foot-thick limestone. The foundation is reportedly strong enough to support a ten-story building. Given all that, the Texas White House laughs at hurricane winds; it has withstood the worst Carla, Alicia, and Ike could throw at it. (Not pictured: the property’s newly installed private beach.)

Be the lord or lady of all you survey from this tiled portico that’s 22 feet above the ground. Sip coffee and watch the rosy-fingered dawn bathe the steady stream of supertankers and container ships silently sliding past your front door toward the Barbour’s Cut freight terminal a half-mile to the north. Exhaling fire and fumes across the bay to the east, there is Sterling’s fearsome former domain: Baytown’s Exxon petrochemical complex, the largest such facility in the nation. You needn’t fret about toxic fumes; prevailing south and southeasterly winds almost always see to it that those poisonous miasmas are carried away to places like Galena Park, Channelview, and Jacinto City. 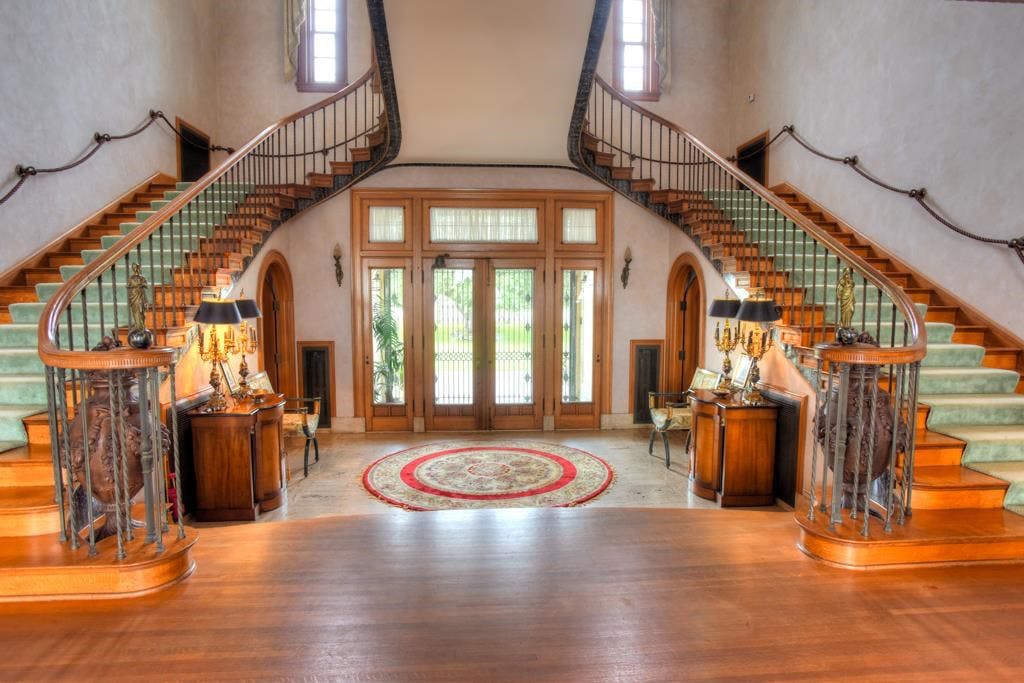 Well, I swan! Will you just fix your eyes upon that Scarlett O’Hara-worthy double curving staircase! Beneath each staircase is a powder room, one for the ladies and the other for gentlemen. The Texas White House has fifteen bathrooms in all, a factoid that played a small role in Gov. Sterling’s defeat at the polls in 1932. Operatives for his opponent, Ma Ferguson, doubled that number to thirty in order to paint Sterling as an effete plutocrat, an effective tactic in the depths of the Depression.

One simply does not enter the grand salon except by way of a double-staircase.

Smell that? It’s rich mahogany. Fill those floor-to-ceiling bookcases with leather-bound volumes, and yep, you too will be kind of a big deal.