—Dallas resident Roger Kaiser via Facebook, according to the Dallas Morning News. The “mess,” in this case, occurred when Kaiser sprinkled his friend’s ashes in the orchestra pit at the Metropolitan Opera in New York City on Sunday. Although it was apparently meant to honor his fellow opera-obsessed friend, it forced the opera to shut down while police investigated what was, for all they knew, a possible terrorist attack (apparently cremated human remains look a lot like anthrax). 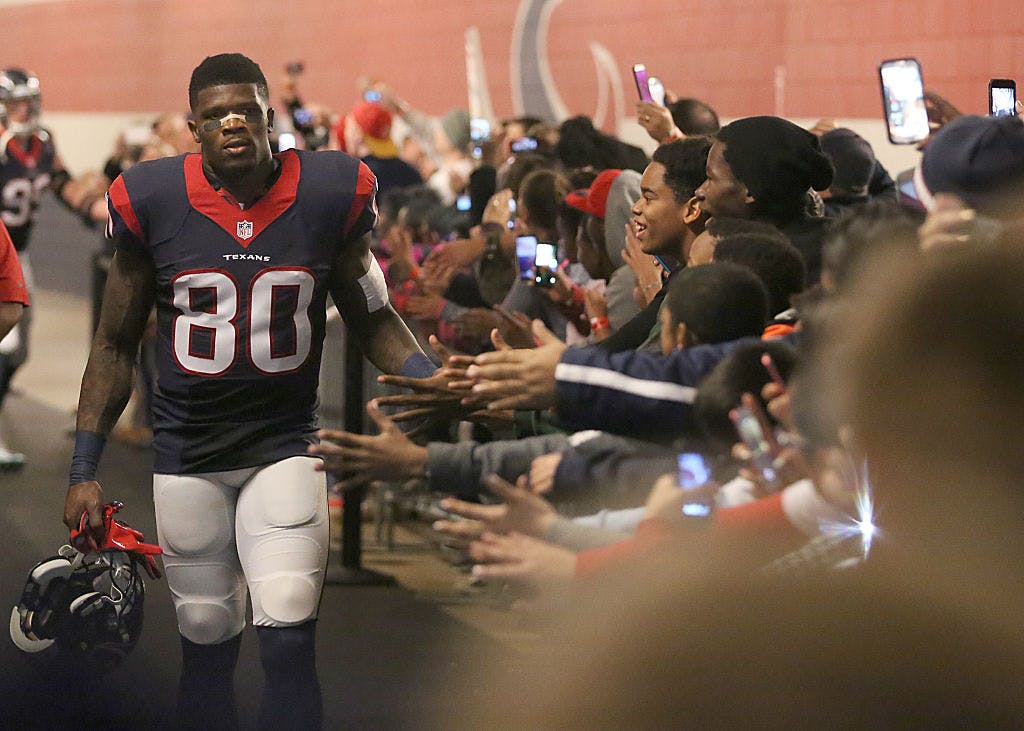 Hanging Up The Cleats
Former Houston Texans wide receiver Andre Johnson announced his retirement on Monday, marking an end to the career of one of the greatest pass catchers of all time, and arguably the greatest player to have ever donned a Houston Texans jersey (the Houston Chronicle says Johnson is “unquestionably the best Texan to ever wear red and blue,” but J.J. Watt may have some claim to that title too). In fourteen-and-a-half seasons, Johnson, now 35, caught 1,062 passes (ninth all-time in NFL history) for 14,185 yards (tenth all-time) and 70 touchdowns. Johnson was drafted by the Texans with the third overall pick in the 2003 NFL Draft, and he played twelve seasons in Houston, eventually becoming the franchise’s all-time leader in every major receiving statistic. Johnson was an incredible talent, a guy who was big, strong, fast, and was blessed with scarily good hands, and those abilities helped him make the Pro Bowl seven times and earn first-team All-Pro honors twice. “He’ll go down as one of the best receivers to ever play the game,” current Texans head coach Bill O’Brien told the Chronicle. But Johnson was never surrounded by much talent in Houston—particularly at the quarterback position—and he only made the playoffs twice and never played in a Super Bowl. Still, he’s probably a sure bet for the Hall of Fame, and he seemed to be just as solid off the field as he was on it. Johnson was the rare superstar athlete who managed to be scandal-free (we’re looking past the Cortland Finnegan fight), and he always maintained a pretty quiet public profile. “Johnson could be so quiet you could barely hear him speak,” writes Chronicle columnist Brian Smith. “As the years went by, his public voice only became softer. In his last days with the Texans, you literally had to be within arm’s reach just to understand what he was saying.” But he was very involved in the community during his time in Houston. For example, Johnson held “shopping sprees” at Toys R Us for children at Christmastime, when he’d let kids grab as many toys as they could and then foot the bill himself. The charity events often cost Johnson more than $10,000.

Tricky Rick
Apparently former Dancing With the Stars contestant (and ex-Texas governor and former presidential candidate) Rick Perry has given U.S. Rep. Michael McCaul a little nudge to challenge Senator Ted Cruz in 2018. The Texas Tribune reports that “GOP sources” said Perry strongly encouraged McCaul late this summer, not long after there were initial whispers that McCaul could have his sights set on Cruz’s Senate seat. Anonymous sources are always a little sketchy, but this is big, if true. Perry seems to be the latest big-name Texan hoping Cruz gets bounced. As the Tribune notes, Perry was never before explicitly anti-Cruz (as so, so many people are), and he endorsed Ted back when Cruz was still in the race to earn the Republican presidential nomination. But a lot has happened since then (including rumors that Perry might be eyeing Cruz’s spot, though that prospect has since faded). Anyway, it seems the ice Cruz is standing on gets a little thinner each day.

Daisy, The Sequel
Lyndon Baines Johnson’s presidential campaign ran probably one of the most famous political ads ever in 1964, featuring a little girl picking petals off a flower as a voice counts down, culminating in a loud boom somewhere in the distance off screen, presumably from a nuclear bomb. The “Daisy” ad, as it came to be known, was a powerful (and also kinda fear-mongering) criticism of the Texan’s conservative opponent, Barry Goldwater, and aimed to convince the public that Goldwater was too wild to trust with the big red button. Now, according to Vox, the ad is back in play, as it neatly parallels the current presidential race. Democratic nominee Hillary Clinton ran an ad based on “Daisy,” after her campaign managed to track down the little girl from the original. In the new ad, Monique Corzilius Luiz, the little girl turned grown-up, criticizes Republican candidate Donald Trump, much in the same way the decades-old ad was meant to criticize LBJ’s opponent. It’s a smart sequel that has a similarly powerful effect as the original did over fifty years ago.

Kicked Meowt
Whisper the cat has been living at the Tri-County Library in Kaufman County for nearly eight years, enchanting visitors with her fur, paws, and whatever it is that cats do. But Whisper was ruthlessly threatened to be sent packing earlier in October, courtesy of the city of Mabank, which recently took over the formerly privately-owned library and decided that Whisper couldn’t stay there anymore. According to the Dallas Morning News, concerned residents pushed back after the cat received her eviction notice, and on Tuesday evening there will be a vote at the city council meeting to determine whether Whisper can continue to lay her whiskers at the library. Mabank Mayor Jeff Norman indicated he was worried Whisper’s library residence might set a precedent for other city employees to bring their pets to work, and City Manager Bryant Morris said he’s received letters from the city’s attorney and insurance agency recommending they get rid of Whisper, citing health concerns because the cat is so close to the library’s kitchen. Whisper’s supporters have started a grassroots campaign to win the vote, going door to door and circulating a petition. This isn’t the first time a North Texas library has tried to kick a helpless kitty to the curb (we will never forget you, Browser the Cat of the White Settlement library).

Could it soon be illegal to teach creationism in Texas’s public schools? Daily Beast

A Texas Longhorns defensive end said he wanted to injure Texas Tech’s QB, then said he was sorry CBS

Can someone please find this artist’s stolen quilts? KHOU