“Cant wait to give a big hug to my bestie @realDonaldTrump at the debate tomorrow night. I know you miss me !”

—Mark Cuban on Twitter. The Mavericks’ owner and arch-nemesis of Donald Trump will be attending Wednesday night’s third and final presidential debate as an invited guest of Democratic candidate Hillary Clinton. We’re guessing Cuban’s desire for a hug is not reciprocated by The Donald. 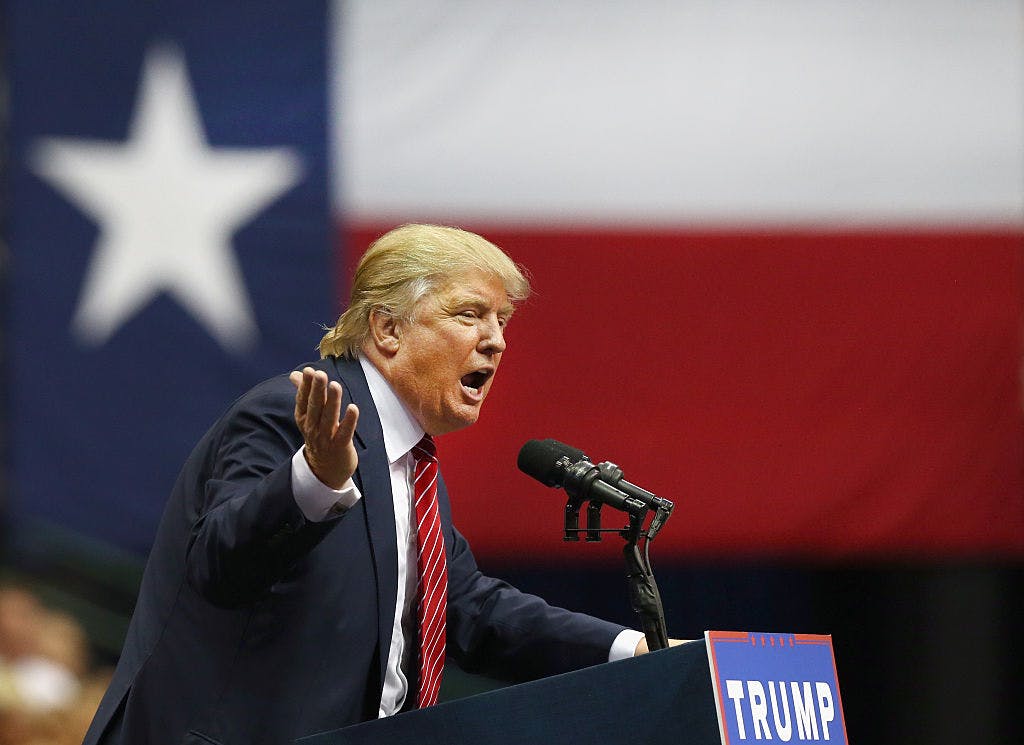 Falling Lead
A University of Houston poll released on Tuesday shows Republican presidential nominee Donald Trump’s lead in the Lone Star State has slipped to just three percentage points, the smallest margin yet between Trump and Democratic candidate Hillary Clinton in Texas. According to the Houston Chronicle, the poll has Trump grabbing 41 percent of the vote compared to Clinton’s 38, a split that falls within the poll’s margin of error of three percent. So basically, according to the poll, the race is in a dead heat here. The Houston poll was a major shock, considering Texas has been blowout-victory territory for Republicans in every election since a Democrat last took the state in 1976. But news of that poll hardly had a chance to settle thanks to another poll that was released on Tuesday—this one conducted by the Washington Post and SurveyMonkey—which said Trump’s Texas lead is down to two percentage points. Two! The incredible shrinking lead doesn’t necessarily mean Texas is going to turn blue come November, though, according to statistics wonk Nate Silver over at FiveThirtyEight. Silver has Clinton’s chances at taking Texas at just 17 percent—still a high enough number to be extremely surprising, but low enough to make a win for Texas Democrats highly unlikely. But according to FiveThirtyEight, Clinton is still more likely to win Texas than Trump is to win the election.

Searching For Solutions
The Dallas Commission on Homelessness is almost ready to hand its final report over to the mayor, which will include a number of recommendations at fixing one of the worst homelessness crises in the state. According to the Dallas Morning News, the commission’s suggestions include the approval of a $25 million bond to go toward one thousand housing units for the chronically homeless over the next five years, the creation of new tax or a fee on real estate deals in order to help pay for services and housing, and the establishment of a permanent commission to oversee the follow through of the recommendations. The current commission was organized by Mayor Mike Rawlings in May, just after the city closed down a massive homeless encampment outside just the city’s downtown. Things haven’t always been smooth sailing for the forty-member panel. According to the Morning News, “the commission clashed, often fracturing between those who have worked with homeless people for decades and those who came from other backgrounds.” Still, they did manage to hash out the recommendations, which are expected to be finalized within the next week.

Hats Off
On Tuesday, Republican presidential nominee Donald Trump ripped San Antonio Mayor Ivy Taylor for criticizing the police officers who were punished after wearing “Make America Great Again” hats while escorting Trump around town during his visit last week. “You can imagine, if they put on a ‘Crooked Hillary’ hat, they would have been just fine,” Trump told a local radio host, according to the San Antonio Express-News. “I assume he’s a Democratic mayor.” Trump’s assumption, of course, was not entirely correct—Taylor does identify as a Democrat (though she is a nonpartisan office holder), but she’s not a dude. Trump went on to say that Taylor “should be ashamed of herself” for saying in a statement that she was disappointed in the officers, who were disciplined by the department for breaking a policy that prohibits city employees from wearing politically charged garb while on duty. A city spokesman defended Taylor in the wake of Trump’s comments, telling the Express-News that “the officers involved violated city policy and were appropriately disciplined. The particular candidate or campaign is irrelevant; San Antonio Police officers must be impartial while on duty.”

Justice For Kitty
A Texas veterinarian who made national headlines after a photo of her holding the body of a cat she sniped with a bow went viral had her veterinarian’s license suspended on Tuesday by the Texas Board of Veterinary Medical Examiners. According to the Austin American-Statesman, Kristen Lindsey won’t be able to practice in Texas for one year, and she’ll be on probation for four years after that. She’ll also have to work under the watchful eye of a supervisor and submit quarterly reports to the board, while taking six extra hours of continuing education in animal welfare. Lindsey escaped animal cruelty charges when a grand jury no-billed her in June, and she was fired from her Brenham vet job shortly after the photo went viral last year. In the caption of the photo, Lindsey wrote: “My first bow kill. The only good feral cat is one with a bow through its head! Vet of the year award…gladly accepted.” Goes without saying, but she probably won’t be getting any such award anytime soon.

Does anyone actually know how much the proposed new Texas Rangers stadium would cost? Dallas Morning News