“The criminals don’t win. Santa will be there.”

—Jeff Procell, senior general manager for Houston’s Northline Commons shopping center, to KHOU. Someone stole a 300-pound red ornament worth $7,000 that was on display outside of the shopping center, and in a true Christmas miracle, the ornament was later found unharmed in an empty lot nearby. The ornament will be replaced in time for the mall’s Christmas party for kids. 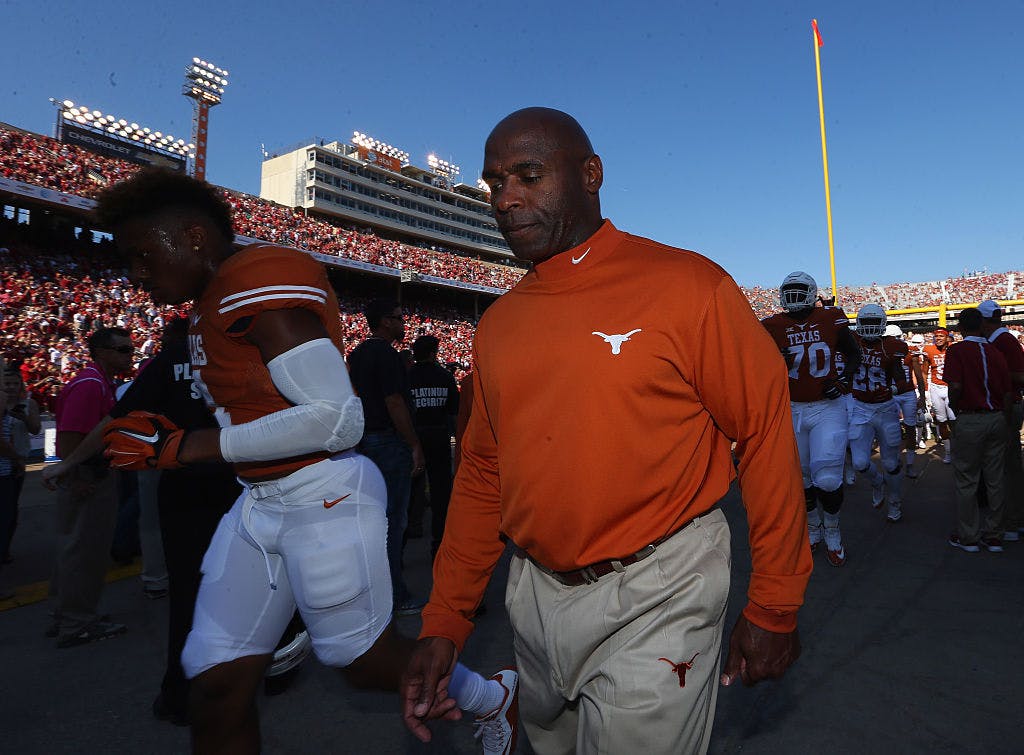 Charlie Out
After the Texas Longhorns’ thrilling upset victory over then tenth-ranked Notre Dame in this season’s opener, pretty much everyone said Texas was officially back on the map after a few sub-par seasons under head football coach Charlie Strong. The win was also seen as a major boost to Strong’s job security, which was shaky at best entering the season. In a post-game press conference, someone asked Strong if he felt relieved. “No,” Strong said with a laugh, “Because I’ve still got a few more to go, so I don’t have any relief. I don’t think you get any relief.” Turns out, he was right. Texas stumbled to six losses in its next ten games, and it now appears as though Strong will be fired, University of Texas officials told the Austin American-Statesman.“It will happen for sure,” the anonymous official told the Statesman. “The question is when.” The last straw for Strong was Saturday’s embarrassing overtime loss to a one-win Kansas team (yes, Kansas has a football team), when the Longhorns turned the ball over six times and blew an eleven-point lead in the fourth quarter. Strong got emotional afterward—his voice cracked while he answered reporters’ questions about his future—and his players took the loss even harder, with some collapsing on the field and others crying in the locker room. “Letting this man go is equivalent to losing a father,” defensive tackle Poona Ford tweeted. “He has done wonders for all of the players on the team and we want him to continue that.” It does seem like Strong will coach at least one more game, and he might make it through the rest of the season on the sidelines before the Longhorns cut him loose. “I’ve said it all along, we will evaluate the body of work after the regular season,” Athletic Director Mike Perrin said in a statement. “We have a game to get ready for against TCU on Friday, and I hope our fans will come out and support our team. We’ll discuss where things stand after that.”

Trump Talk
A federal judge in San Antonio lectured some recently naturalized U.S. citizens during a ceremony on Thursday night, and he had a lot of things to say about President-elect Donald Trump. “I can assure you that whether you voted for him or you did not vote for him, if you are a citizen of the United States, he is your president,” Judge John Primomo said, according to KENS5. “He will be your president and if you do not like that, you need to go to another country.” Well, that’s certainly a strange way to welcome the nation’s newest citizens. Primomo also said some harsh things about anti-Trump protesters and NFL players kneeling during the national anthem: “I detest that, because you can protest things that happen in this country; you have every right to,” Primomo said. “You don’t do that by offending national symbols like the national anthem and the flag of the United States.” It’s worth noting that your right to offend national symbols is protected under the First Amendment, and flag-burning was upheld by the U.S. Supreme Court. Primomo later clarified his comments to KENS5, saying he did not vote for Trump, and that he “meant his words to be unifying and respectful of the office of the president, not political.”

Strange “Coincidence”
A small group of protestors held a White Lives Matter rally at the Capitol on Saturday while a monument honoring African Americans was being unveiled nearby, prompting a larger group of counter-protesters and the deployment of police in riot gear. The organizer of the White Lives Matter protest had said earlier that the planned rally had nothing to do with the ceremony to unveil the monument and that the timing was just a coincidence. What a funny coincidence! Things got ugly fast at the protest, according to the Austin American-Statesman. Some of the White Lives Matter protestors were armed, about 400 anti-fascism counter protesters surrounded the first protest and yelled things like “Nazi scum,” police positioned themselves between the two groups, eight people were arrested, and everyone was angry. On the flip side, the monument ceremony seemed pleasant, and the proceedings apparently weren’t really disrupted.

State Secrets
According to the Texas Tribune, the Texas Department of State Health Services blew a bid for a $1 million federal grant to buy Naloxone, a drug that can reverse the effects of opioid overdoses, and now the state is taking extreme measures to fight the release of records related to the scrapped grant application. The Department of State Health Services hired a grant writer, researchers, and public health workers to help out with the grant last May, but the grant was never actually submitted. “The clock just ran out,” a department spokesman told the Tribune. “We just didn’t have everything we needed organized to get the application in by the deadline.” Researchers who worked on the grant application told the Tribune that the bid was instead killed by state leadership, and blamed the decision on politics. When the Tribune filed an open records request to try to find out exactly what happened with the botched grant, the department filed a lawsuit to keep the records from seeing the light of day, claiming “unfinished drafts are exempt from open records law.” This came after the Texas attorney general’s office ruled in September that, under Texas law, the records should be released to the public.

Wait, is Dallas about to go bankrupt? New York Times

Someone burned a “Tomb of Christ” roadside attraction near Lubbock KLBK