“It was the most emotional, the most meaningful, project I’ve ever done. If I never paint another project in my life I’ll be fulfilled.”

—Tracy Bellion to the San Antonio Express-News. Bellion, a San Antonio calligrapher, was asked to paint victims’ names on the white chairs in the newly redone Sutherland Springs First Baptist Church. More on that later. 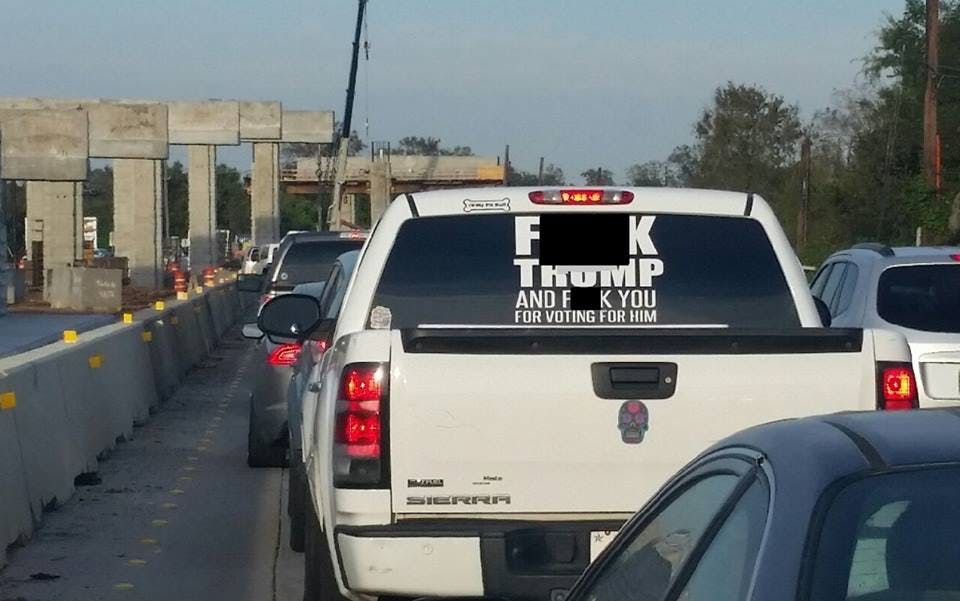 Traffic Target
Fort Bend County Sheriff Troy Nehls said he’s been receiving calls, texts, and emails about a truck with a profane anti-Trump message on its back window. But those are probably nothing compared to the social media firestorm Nehls created with his reaction. On Wednesday, Nehls posted a photo of the truck, which prominently features a bumper sticker that reads “F–k Trump and f–k you for voting for him,” to Facebook and asked for the truck’s owner, or anyone who knew the owner, to come forward. “Our Prosecutor has informed us she would accept Disorderly Conduct charges regarding it, but I feel we could come to an agreement regarding a modification to it,” Nehls wrote in the post. District Attorney John Healey, meanwhile, told the Houston Chronicle that he was not aware of the issue until around the same time the comments were posted. He and the ACLU do not think that the sheriff’s threat to prosecute is valid. “I did not believe it was a prosecutable case based on the definition of disorderly conduct,” Healey told the Chronicle. In response to Nehls’s post, the driver, Karen Fonseca, told ABC13 that the custom-made decal, which she put on her truck eleven months ago, is an expression of her First Amendment rights. She says people tell her they “wish they had the guts” to put a similar one on their vehicles, and that she doesn’t plan to remove the sign. Since Nehls posted the photo, it has received over 17,000 comments on Facebook. As the Houston Chronicle notes, Nehls is considering a congressional bid.

Twitter Fingers
Texas’s “tweeter laureate” had to answer tough questions about his popular Twitter account on Wednesday. Texas Supreme Court Justice Don Willett, one of President Donald Trump’s nominees for the U.S. Fifth Circuit Court of Appeals, went before the Senate on Wednesday along with his fellow nominee and Dallas appellate attorney Jim Ho. But most of the two-hour confirmation hearing was focused on Willett. According to the Texas Tribune, senators took issue “both for his outsized presence on the social media platform and for a pair of particularly controversial tweets related to LGBT issues.”

Veep Visit
At the annual Republican Governors Association conference, held in Austin this year, Vice President Mike Pence outlined the Trump administration’s plan for a major tax overhaul. “We’re going to take a decisive step—before the end of this year . . . to cut taxes across the board for working families and businesses,” Pence said, according to the Texas Tribune. “I know this room knows all about tax cuts because these Republican governors have been busy cutting taxes in recent years and making a real difference in their states.” As the Dallas Morning News notes, Pence also met with Governor Greg Abbott and revealed the federal government distributed more than $1 billion in housing assistance for Hurricane Harvey victims.

Helping to Heal
Many were shocked at the transformation of the First Baptist Church in Sutherland Springs. Completely transformed, the church reopened as a public memorial on Sunday, just one week after 26 people were killed in the sanctuary. The San Antonio Express-News has the story behind the church’s dramatic shift, which involves a vision from God and a lot of generous Texans. It’s worth a read.

A $450.3 million Leonardo da Vinci masterpiece was almost sold to the Dallas Museum of Art five years ago for $125 million Dallas Morning News

“Longhorn who allegedly said ‘I’m a UT student! You can’t arrest me! is arrested” Houston Chronicle