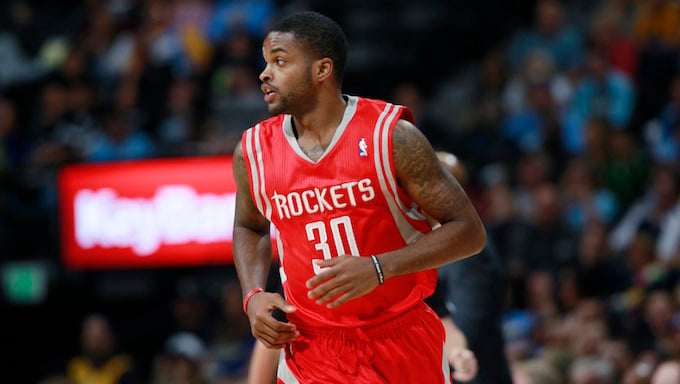 There may not be a more elegant and exciting play in all of sports than the game-winning three-point shot. It requires poise, skill, timing, and precision, with a degree of difficulty that means that even the best players miss them half the time, which is essentially the recipe for an exciting, game-changing sports play. And Texas basketball fans got to see two big scores in less than 24 hours over the weekend.

The biggest basketball story in Texas right now is Troy Daniels, the rookie Houston Rockets shooting guard who went from the subject of think-pieces (including one by our own Jason Cohen) touting the ace prospect from the Rio Grande Valley Vipers in the NBA’s D-league to, as Grantland chief Bill Simmons put it on Twitter, “the new number one craziest thing that’s happened in the 2014 NBA Playoffs.”

As Daniels’ Wikipedia entry briefly noted on Friday night, the rookie hit a game-winning three-pointer in overtime in the Rockets’ game three against the Portland Trail Blazers with 11.9 seconds left. The shot really was incredible, coming off of a loose ball and displaying remarkable presence of mind and confidence by the young player to take the shot the moment the ball hit his hands.

It was the exact sort of coming-out party for a rookie who’s excelled in the D-league that makes anyone who followed him with the Vipers look downright prescient (were he a less-classy sort, we’d expect to see Jason Cohen wandering around the office wearing a t-shirt that said “I told you so”). And, as it happens, it wasn’t even the best game-clinching three-pointer a Texas NBA player hit this weekend.

That honor goes to Vince Carter of the Dallas Mavericks, who won game three of the Mavs’ series with the San Antonio Spurs on Saturday after receiving an inbounded ball with 1.7 seconds on the clock. The Mavs, down by two, got the ball to the 37-year-old former all-star with no time to spare, and Carter took and nailed the shot, putting the Mavericks ahead by one as the buzzer sounded.

Carter’s shot is something we’ve seen before from the eight-time NBA All-Star, who is also the seventh all-time three-point shooter in the NBA. But for an aging player who’s inarguably on the downside of his career to show that he’s still got it, there’s a lot to appreciate in the shot.

There is, anyway, if you were rooting for the Mavericks. Spurs fans, on the other hand, were left out of the #Vinsanity fun, instead watching with their jaws on the floor as the team fell behind 1-2 in the series.

Meanwhile, the second game of the weekend between the Rockets and the Trail Blazers, which took place on Sunday night, didn’t feature the same sort of late-game heroics, as the team lost by three in overtime. It did demonstrate more of a coronation for Daniels, though, who was 4-for-5 on three-pointers coming off the bench. Taking the threes is a big part of Daniels’ philosophy, something that Jason Cohen’s story on the Vipers captured well:

Not that he thinks about such things: if Daniels is doing his job, he’s not thinking about anything at all. Sometimes he doesn’t even know where he is on the court (it’s been said a few of his makes are taken from so far way they ought to count for four points). “If I’m open, I feel like I can make the shot, I’m going to shoot that,” Daniels says. And he certainly doesn’t need advanced statistics, or even the wisdom of a revolutionary coach, to tell him to how to play the game.

“Three is always more than two. So that’s my philosophy.”

The rookie is a fine story for Houston sports fans who are currently languishing through a wretched start to the Astros’ season, the inevitable disappointment that comes with owning the number-one overall pick in the NFL Draft at a time when there’s no clear top prospect worthy of the pick, and a Rockets team that, despite the contributions of Daniels, is currently just one game away from elimination.

The Mavs and the Spurs, meanwhile, face off once more tonight. We’ll see if Carter—or any of his counterparts in black and white—can find more than two when they need it.