“The last time I checked, we don’t have a rubber shortage in America.”

— Ted Cruz on the availability of contraceptives

San Antonio’s multi-talented artist Luis Munoz has the right idea, recently offering a different (and tastier) version of the now-iconic graffiti in Austin. His taco declaration is also for a good cause, as he explains on his Facebook account. 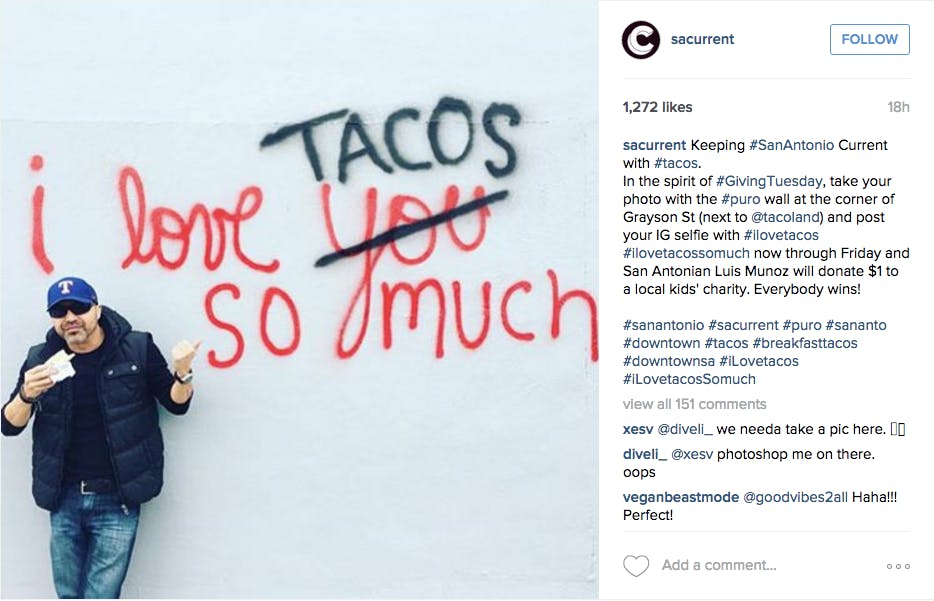 Texas By the Numbers

P Stands for “Property Rights” — The Texans fighting to keep their Red River property from being taken by the federal government just got an extra boost from none other than Land Commissioner George P. Bush. The Land Office filed a motion on Tuesday to join the seven plaintiffs in a federal lawsuits that “accuses the U.S. Bureau of Land Management of perpetuating an ‘arbitrary seizure’ of land along a 116-mile strip of the river, whose changing course has fueled a century’s worth of property disputes along the state’s border with Oklahoma,” writes the Texas Tribune. While Bush joins as just another big name now attached to the suit (Governor Greg Abbott plans to file his own suit and Attorney General Ken Paxton submitted a supportive brief), his motion is the first with real backing. “Bush argues the federal bureau is threatening mineral rights managed by his General Land Office” and that “the federal government is claiming ownership of about 35 of those acres, Bush argues.”

Day in Court — As promised, Ken Paxton’s attorneys asked a judge in McKinney to dismiss the felony charges against the attorney general during the first real day of courthouse shenanigans between the defense and prosecution. Paxton’s attorneys argued that “the grand jury was improperly influenced by a local judge, that the state had no jurisdiction on the fraud allegations and that the statute of limitations had expired on a third charge,” according to the Houston Chronicle. As the story notes, the defense laid out “no fewer than 10 reasons the three indictments should be thrown out,” including an unclear indictment and unclear state rules. The Chronicle‘s story is full of wonderful details about the proceedings, which “alternated between fiery and tedious, theatrical and technical, as attorneys fought to win a battle of wits and words, and then veered off into complicated discussions of state securities laws and grand jury procedures.” Among the many highlights was “a move uncharacteristic of the conservative attorney general, who frequently accuses the Obama administration of usurping state powers, Paxton’s attorneys said federal securities law trumps state law in this case, meaning their client should be off the hook for the state charges.”

The Old Man and the Tourism— So, how’s Governor Greg Abbott’s friendly trip to the Communist island of Cuba going? According to the Associated Press and the Texas-based pool reporter, it’s pretty meh. “The governor dined and watched a concert at one of the capital’s high-end private restaurants Monday evening but was told by Cuban officials Tuesday that there were little opportunities for businesses from his state on the island at the moment.” Most of Abbott’s time seems to be spent smiling, waving, and dispensing gifts. During a meeting with the first deputy minister of tourism, Abbott handed over a baseball signed by Nolan Ryan. “Yo tengo un baseball. It’s signed by Nolan Ryan who is an All-Star, one of the best players, and he’s also a Texan. He asked me to give this to you as a sign of friendship,” Abbott said, according to the Austin American-Statesman. Abbott didn’t out-and-out call for the end of the United States’s fifty-plus-year embargo, but he did say that “Texas has a business point of view for travel and tourism to Cuba” and “from a Texas perspective, we view Cuba as a place of vast tourism and travel opportunities.” It’s an interesting contrast, as the Tribune notes, from Ted Cruz, who has blasted President Obama for thawing Cold War relations.

The Life and Times of Houston’s Night Shift Workers

RIP: Pour One Out For Brewmaster Steve Anderson

Edinburg Bans One of the Main Reasons to Go to Bars