The little national publication known as Paste magazine has posted a list of the twelve Texas bands that, as the headline so demands, “you should listen to now.” (Emphasis added, because you should, now). Exhibit A:

San Antonio artists Joe O’Connell and Blessing Hancock have somehow made highway underpasses even creepier than they already are, but it’s creepy in such a fantastical way: 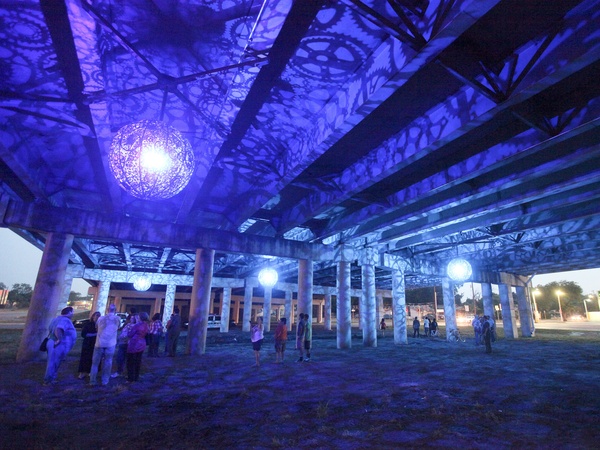 Houses of Cards — Despite all those wonderful jobs, low unemployment, and friendly housing market, Texans are living a lie. A new study found that it would only take a single medical emergency, sudden joblessness, or any number of everyday crises to put half the state’s households into poverty. The state ranks “37th in residents’ overall financial security,” according to the Texas Tribune, “lacking enough savings to pay for three months of basic expenses in case of a crisis …” As with most of the country, the middle-class isn’t doing as well as it thinks it is, with a third of such households financially insecure. So in the coming year, while winterizing your house, think about about fortifying the bank account.

Improving Crowbar Hotels — Jail might be getting ever-so-slightly better for LGBT inmates in the near future. “The Harris County Jail in Houston, the third-largest in the country which processes some 125,000 inmates annually, is one of many nationwide implementing changes to the way it treats its gay, lesbian, bisexual and transgender population,” according to the AP. The “changes stem from a law passed by Congress under former President George W. Bush that requires federal, state and local lockups to eliminate rape in part by adjusting regulations about how the population lives behind bars.” While LGBT prisoners might be getting it a bit better, death row inmates are still S.O.L. As the Texas Department of Corrections conducts a routine review of mandatory solitary confinement for the terminal prisoners, a coalition of reform advocates are “pushing to ease the restrictions, arguing that allowing death row inmates [a minimal of amenities] will improve” the working conditions for guards and the mental state of inmates.” Unfortunately, “there is little chance of a major change,” according to the Austin American-Statesman.

Two-For-One Deal — If you’re one of those aggravatingly smart kids who was upset that the state recently dropped its Algebra II requirement, don’t worry! You can still learn plenty of math that few people will ever understand. “The Texas Board of Education adopted two new math courses on Thursday that are designed to cover much of the same material offered in algebra II, ” according to the AP. The two higher-level math courses will be statistics and algebraic reasoning. Why? Because, as disgruntled board member and obvious math-lover David Bradley said, “We’ve got a piece of legislation that we’ve got to put some lipstick on.” Unfortunately, statistically speaking, lipstick won’t improve the low educational scores of Texas children.

Space City, Tex. — Out with the old—government-funded space exploration based out of Houston, that is—and in the with the new: private space endeavors based out of … Brownsville. NPR has a wonderful story on the recent efforts of Brownsville to entice the Space-X to establish a permanent headquarters for the company’s interstellar adventures. The company has been eyeing a Texas location for some time and not only has Brownsville’s development council actively come a-courtin’ but so too, apparently, has the entire state government. “Eager to make this deal work, Texas has offered SpaceX a $15 million incentive package, and the Legislature passed a special law that would close the public beach during launches.” For their part, the town’s younger generation seems less concerned with the possible economic boost and more transfixed by the idea of blasting off this rock, as fast and as far away as possible. “Whatever you do, if you don’t leave the first time an opportunity presents itself, you never will,” said one Millennial. “All of this and much more could change with SpaceX having a presence down here.”

Big, Illegal Trouble in Houston’s Little Chinatown (and a Few Other Locations, Too)

Texas A&M Is Rent Controlled For the Next Four Years

Foreign Tourists Not Remembering the Alamo as Much These Days