If you’re Norwegian or happen to spend a lot of time around Norwegians, then this fact that absolutely blew our minds might not be news to you, but apparently the word “Texas” is slang for “crazy” or “wild,” as in, “the end of the [whatever sport they play in Norway] game was totally Texas!” 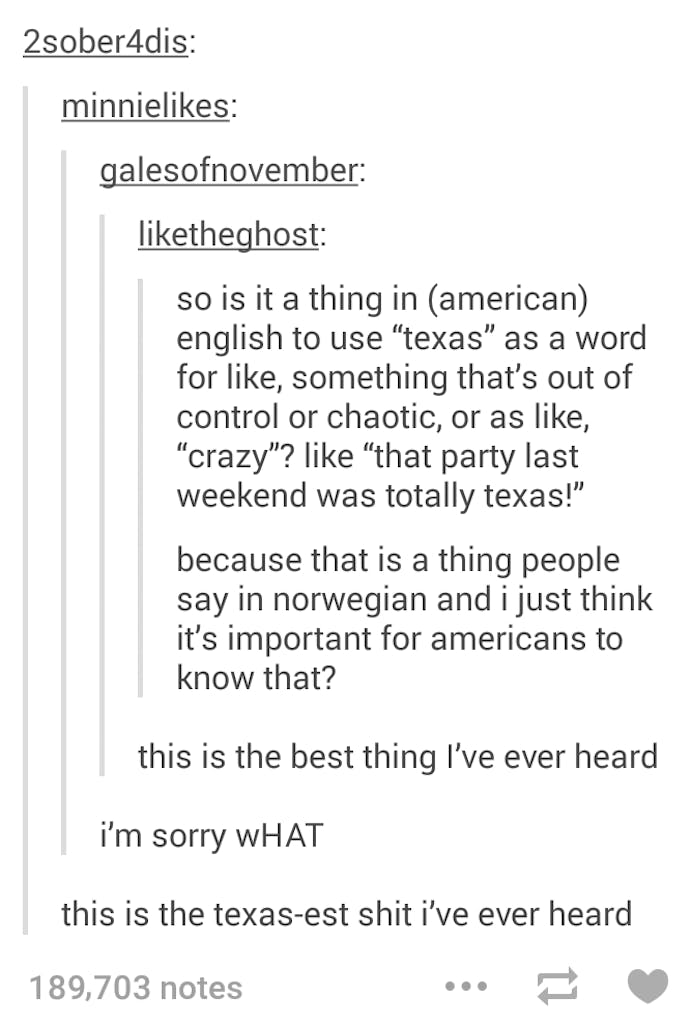 We saw the screen capture from Tumblr float around social media this weekend and were initially skeptical. But, lo and behold, the evidence has convinced us that this is really an accepted part of Norwegian slang.

Usually, when the word “texas”—as an adjective, most often without capitalization—appears in Norwegian, the context involves the phrase, “det var helt texas,” which translates to, roughly, “it was totally/absolutely/completely bonkers.” You wouldn’t call a person “totally texas”; it usually describes a chaotic atmosphere.

A Norwegian Tumblr user explained some of the etymology of the phrase in a post from last May:

The expression itself has to do with associations. It’s something that brings to mind chaotic, crazy conditions, like the “wild west,” and at least back when the expression was coined, the “wild west” held very strong Texas associations. Hell, even when I was a kid in the 80s, I thought that all American cowboys came from Texas, and that’s just how it was. Texas = land of the cowboys. And rodeos. And the wild west. A Western movie? Probably from Texas.

This quote from an paper on child language development (talking about a child’s metalinguistic development) should tell you a little bit about how Norwegians can condense a state into stereotypes:

Translation: The expression “it was totally Texas on the bus today” will not mean much to someone who’s just learned that Texas is a place with cowboys, rodeos and cattle.

The expression dates back several decades, and speaks to how the mythos of Texas has been interpreted in one Scandinavian country: “Texas” = “cowboys” = “Wild West” = “an unpredictable, exciting, sometimes scary atmosphere,” and thus can be used to describe a party that had people jumping off the roof into a swimming pool, a soccer game where fans were getting tense, or even a troubling traffic situation, which—while the etymology may be different—is fair enough for anyone who’s been in any Texas city during rush hour.

All of which is to say that when considering what “Texas” means to the world, it’s fascinating to realize just how far and wide our fabled culture spreads—or as they might say in Norway, det er helt texas as heck.

15 Items to Add to Your Winter Emergency Kit