This story originally appeared in the February 2018 issue with the headline “Alone at the Top of Texas.”

I ’d been hiking for hours along the southwestern rim of the Guadalupe Mountains, the highest range in Texas, when I came to a section of trail that seemed to have washed right off the mountainside. Up ahead, the limestone ridge of the Guadalupes loomed nearly a vertical mile above the rest of the Chihuahuan Desert. To my back, a dry salt lake shimmered white in the sun. I was maybe halfway up the mountain ridge, and I had not seen another hiker that day. Nor would I. The trail, or what was left of it, hugged the wall of a ravine named Bone Canyon, where the unsteady terrain slanted toward a plummet of more than a hundred feet. I took a step but landed clumsily, sending shards of flat rock to clatter and tumble into the crevice of Bone Canyon. Ah, I wondered: Whose bones? How long till someone discovered mine?

The Guadalupes rise from rough country. Preserved as one of just two national parks in Texas—the other, of course, is Big Bend—Guadalupe Mountains National Park is situated more than a hundred miles east of El Paso, just across the New Mexico line from Carlsbad Caverns. Known as the “top of Texas” because it includes the four tallest peaks in the state—not to mention nine of the tallest ten—the mountain range still bears the evidence of its formation as an aquatic reef nearly 300 million years ago. The Guadalupes are so much higher than the rest of the arid landscape, they form a “sky island,” which forces wind to rise, cooling and condensing the moisture in the air and encouraging rain to fall. The rain nurtures plants and animals that otherwise couldn’t survive in the region, like the slender-limbed Texas madrone, a tree known as Naked Indian and Lady’s Leg, whose red berries feed the ringtail cats that forage in the canyons at night. Black bear, panther, and elk also make their home here.

On most of the park’s trails, you’re more likely to see a mule deer than another human. One of the least-visited national parks in the United States, its accommodations are intentionally spartan, as if to deter the less than committed. There’s no restaurant or bar, no hotel, no gas station, not even a shower in the campground bathrooms. Those who forgo the Guadalupes for Big Bend can pull up a patio chair at the Chisos Mountains Lodge and wash down a bowl of elk chili with a glass of wine as the sun famously sets through “the Window.” In the Guadalupe Mountains, you’re on your own. The nearest motel bed is thirty miles northeast, in Whites City, New Mexico.

They Saw Her Face

Spanish explorers named the mountain range for the Virgin of Guadalupe after they noticed her likeness on the cliff face of El Capitan, the dramatic wall of limestone that marks the Guadalupe’s southern point.

“This is the Wild West, the way the country used to be,” says Michael Haynie, a park ranger who’s been helping visitors get to know the place for nearly two decades. “To experience it, you have to get out of your car and walk, but that’s part of the appeal. You can explore and have an uninhibited, primitive form of recreation in the wilderness, and you never know what you’ll discover.”

Many visitors prefer to stroll between the sheltering walls of McKittrick Canyon, particularly in the fall, when the leaves of the bigtooth maples turn brilliant shades of orange, gold, burgundy, and red; others test themselves on a trek to the summit of Guadalupe Peak, which, at 8,751 feet above sea level, is the highest you can go on Texas soil.

At the trailhead one morning this past fall, Jerry Hawkins, age 78, of Livingston, and Wayne Taylor, age 69, of Canyon, were bundled against the chill. They had acquired a backcountry permit to camp near the peak the night before, but the cold and wind had changed their minds. “I did the hike in 2004,” Hawkins said. “It was very adventurous. Great scenery, but moderate to strenuous. You better be physically ready.”

I saw the men later that afternoon on a completely different trail. “We got up there to a certain point and got to talking about it, and we thought, ‘Well, you know, we can come back down and do something else,’ ” Hawkins said.

No argument there: visitors have options, including a brand-new one that takes you from the heights of Texas to the depths of New Mexico. Hard-core hikers can tackle the new, hundred-mile-long Guadalupe Ridge Trail, which opened in May and connects Guadalupe Peak with New Mexico’s impressive Sitting Bull Falls in the Lincoln National Forest, and then on to Carlsbad Caverns.

Top: On the Salt Basin Overlook Trail at dawn.

For a quicker adventure, scramble around the white-washed boulders of Pine Springs Canyon and up a natural staircase to shadowy Devil’s Hall, where eons of flowing water carved a preternaturally tight gorge that drops one hundred feet deep through the limestone. Over on the park’s western edge, the Salt Basin Dunes are accessed by a road of hard-packed sand, which feels like driving on a beach where the sea has permanently receded. When I visited on one of the park’s busiest days of the season, my car was the only one in the lot. An easy trail through grass and greasewood led to dunes rolling below the dramatic panorama of the Guadalupes’ western ridge, the peaks pink and gauzy in the evening light.

On another day, I hitched a four-wheel-drive ride from Haynie to the isolated Williams Ranch, where in 1908 a man built a wooden farmhouse for his bride. The story goes that she stuck around for just one night before demanding they move. From Williams Ranch, a little-used trail into the canyons zigzags among mesquite bushes, prickly pear, and the broomlike cholla cactus. A few thorn pricks were a fair trade for the views. Then I came to the washed-out section of trail. Taking a deep breath, I eased my way across, knocking only a few more rocks over the ledge. Eventually I rounded the base of El Capitan, the dramatic wall of craggy limestone that served as a landmark for travelers for centuries and now provides its likeness on many keepsakes in the park gift shop.

As for the Guadalupe Peak Trail, the first stretch is steepest. On a cool morning under empty skies, I stopped along the trail to rest and let a couple of guys pass. “How’s it going?” I asked.

“This sucks,” one of them muttered. Later, a tough-looking older gentleman in blue shorts stormed past. He hadn’t even brought a water bottle. “Why are we doing this?” he asked. Folks heading downhill volunteered unsolicited encouragement. “Great job, buddy! Almost there!”

By midmorning the wind was murmuring through the ponderosa pines that shade the high country. Reaching a false summit, I crossed a wooden bridge and made the final ascent, arriving at the peak nearly four hours after my hike had begun. I had expected to rest in solitary reflection while enjoying the hundred-mile views of the desert badlands. Instead, I came upon an impromptu celebration.

The ten or so people on the rocky summit, mostly strangers to one another, were giddy with their shared accomplishment, chatting and laughing as easily as old friends. A friendly North Dakotan snapped photos of the hikers, and a blond boy dug through an ammo box that holds, among other things, a notebook of signatures from hikers who’ve conquered the climb. He pulled a can of tuna from the box. “This one expired in 2015! I’m keeping it,” he said, dropping it in his backpack.

We lingered together at the top of Texas, taking in the distant Chihuahuan Desert. Then, by ones and twos, we said our goodbyes and began the descent. 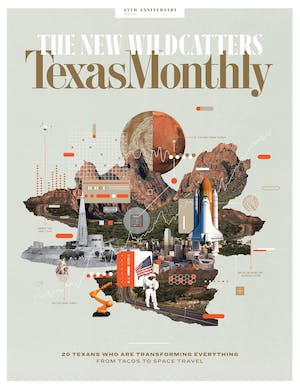