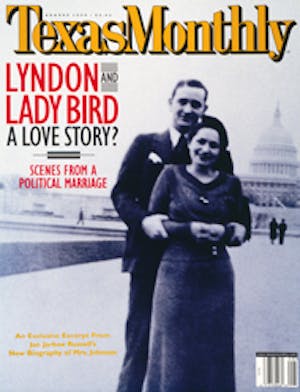 NINETEEN NINETY-NINE HAS not been kind to Dallas-based A. H. Belo. As of the end of June, the media conglomerate’s stock price was down by more than 15 percent from a year earlier. The average daily and Sunday circulation of its flagship, the Dallas Morning News, is down. Its fledgling news channel, TXCN, has been thwarted in its efforts to go statewide by Time Warner, which plans its own Texas news channel. Now comes word that three black women—one who works at the News and two who used to—have filed a federal class action lawsuit alleging racial discrimination by the paper and its parent.

The suit charges that Yvette Clewis, Rhonda Holyfield, and Kathy Wyatt, like other female black employees of the classified advertising department, were subjected to “verbal abuse, humiliation, ridicule, and embarrassment on an ongoing basis”; repeatedly passed over for promotions to better-paying jobs; penalized for taking sick days;  and reprimanded and disciplined more frequently than their white counterparts. It was brought after each of the women sent a “charge of discrimination” to the Equal Employment Opportunity Commission, whose investigator found neither probable cause to support the claims nor a reason to dismiss them outright. “Our position is that management perpetuates these policies, which disproportionately affect black employees,” says the attorney for the plaintiffs, Doris Piper, who represents another News employee, Hattie Wayne, in a separate racial discrimination suit, which alleges black employees in the paper’s retail advertising department are given fewer accounts that generate high-dollar bonuses.

Marian Spitzberg, Belo’s deputy general counsel, denies the allegations in both suits but declines to comment further, citing pending litigation. But News publisher Burl Osborne does have something to say. While he too can’t comment about the suit just filed, he takes umbrage at its charge that an observation he made at a management meeting last year is “inconsistent with the newspaper’s image of inclusion.” According to the suit, when Osborne was asked whether the paper’s Hispanic-oriented free weekly La Fuente could be sent to all subscribers, he replied that he didn’t want to “ghettoize” the paper. Osborne insists that account misrepresents what he said. “It’s not inclusive,” he maintains today, “to isolate news about certain groups as if they don’t belong in the mainstream.”

Wayne’s case goes to trial in December. The timetable for the new suit is not yet known; at press time Piper’s other plaintiffs were still waiting for Belo and the News to answer their complaint.

IT’S A GREAT TIME TO GET Bill Clinton between the covers: Attack books by journalists Bill Gertz and Christopher Hitchens and White House turncoat George Stephanopoulos recently made the New York Times best-seller list. So why not the woman who started it all? This month, Dallas attorney Dolly Kyle Browning—whose I-slept-with-him-honest-I-did tale, the 1997 novel Purposes of the Heart, seems more credibly fact-based now than it did in those halcyon pre-Monica days—returns with another self-published take on her extinguished flame. In the cheekily titled Perjuries of the Heart, Browning recounts her role in the scandals of ’98, when she was in demand as an authority on the president’s distinguishing characteristics. “What I am writing here is true,” she explains, “no matter what the meaning of the word ‘is’ is.” And, if it’s anything like her debut, no matter what the meaning of the word “writing” is.

“IT’S CONSERVATIVE TO WRITE ABOUT my presidential campaign, but it’s compassionate to get my name right.” Or so George W. Bush might say to reporters who continue to refer incorrectly to him as “Jr.” One year ago, this column razzed media organizations for not doing their genealogical homework (he’s not a junior because his dad is George H. W. Bush). You’d think they would have figured it out by now—it’s not like the guy’s in the news or anything—but, incredibly, they haven’t. Until they do, every few months we’ll list the offenders, and we’ll get their names right. January through July: the Village Voice, the New York Times, Boston’s Globe and Herald, the Detroit News, the Tampa Tribune, the Associated Press, London’s Sunday Times and Independent, Toronto’s Star and Sun, and (arrgh!) the Fort Worth Star-Telegram.