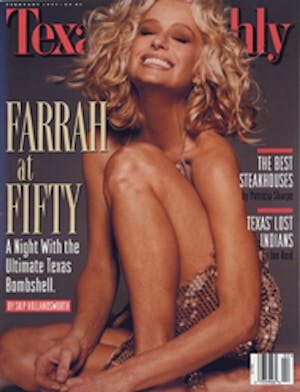 STEPHEN KLINEBERG IS A MAN WHO REVELS IN STATISTICS, finding a pleasure in them so intense it borders on the sensual. We sat at a small round table in his breakfast room as he led me through the arrays of numbers that he has worked each of the last fifteen years to produce. Pampered cats walked through the room in majestic silence and his beloved dog appeared from time to time to paw at his leg for a walk. Klineberg ignored them in favor of his statistics. These weren’t merely numbers on the page. Millions of lives and decisions lay behind them. They were stories. They were revelations! They were Houston!

Klineberg is a professor in the sociology department at Rice University. Beginning in 1982 he has conducted each year his Houston Area Survey, a bland title for what has now become, after fifteen surveys, a vast and unique archive of information whose importance extends far beyond Houston. It will be as valuable in the future to historians trying to understand what happened near the end of the twentieth century as it is today to anyone who is trying to understand what is happening this minute or about to happen soon. Everything is here—not only the usual age, ethnic background, education, and income but also information about almost every important social issue including crime, sex, race, religion, and even fears and aspirations. In 1996 Klineberg published an additional report, the equally blandly titled Houston’s Ethnic Communities, that included additional surveys in the black and Hispanic communities and the first extensive survey of Houston’s Asian population. Although there is a national survey of attitudes done at the University of Chicago every other year, there is no similar effort over such a long period of time for any other American city, perhaps for no other city in the world.

The survey first appeared in March 1982. (Originally financed by the Houston Post and currently by the Houston Chronicle and KHOU-TV, it remains independent and nonpolitical.) Although there were already signs that Houston’s boom of the seventies would soon end, few recognized them. The city was bursting with confidence and money. Klineberg thought he would be measuring the attitudes about the social costs of unfettered growth and asked about transportation, crime, pollution, economic outlook, and a variety of social issues. But just a few weeks after the survey appeared it was clear that something bad was happening in the economy. It was deflating rapidly, causing Klineberg to change his original assumptions. But, in succeeding surveys he kept asking many of the same questions. Since then about two thirds of the questions remain identical each year and about one third are new. Thus, the survey tracks the changes in attitudes about so many important issues from the end of the boom, through the bust, to the general stability of today. In addition, when the survey began, Houston had ballooned in population, mostly from Anglo immigrants from other parts of the country. The attitudes of Houstonians weren’t just regional attitudes but a mixture of attitudes that made it as much a representative American city as there was. But since then, Houston’s growth has been almost entirely from immigrations from outside the country—in particular from Mexico,  Central America, and Asia. Houston joins New York, Miami, Chicago, and Los Angeles as the melting pots for an America that will be vastly different from the old one. And the survey tracks how that immigration has affected the way people think about life in their city. There simply isn’t anything else quite like it. It’s the record of a city as its economy and its population change at the same time. According to the most recent survey the population of Houston is

*Older—one third of all adults are over fifty.

*More cautious—59 percent think the United States is headed for more difficult times, up from 48 percent in 1989.

*Peaceful—62 percent do not own a firearm of any kind.

*Conservative—60 percent think government tries to do too much; only 19 percent say they are liberal.

One can, as Klineberg does, spend hours pondering the meaning of the contradictions in some of his numbers. For instance, 66 percent now say that religion is “very important” in their lives, up from 52 percent in 1982. But 41 percent say they have not been to a religious service in the past thirty days, the same as in 1982. In 1982, 26 percent thought crime was the biggest problem in the area; now 59 percent think crime is the biggest problem. Yet 60 percent believe police protection is excellent or good. In 1982, 20 percent thought it was poor; now only 6 percent do. In both 1983 and 1996 Klineberg asked what is most important in making a good job—good pay, intellectual challenge, job security, or contribution to society. Both times two thirds ranked good pay either first or second and just over half ranked job security first or second. But last year 36 percent mentioned contribution to society as first or second compared with 29 percent in 1983. Klineberg sees this as an important signal to employers of a growing interest among employees that the ability to volunteer in the context of work is becoming an attractive benefit of employment.

With regard to the growing Hispanic population, it’s disquieting to learn that their history has not been one of improvement across generations as with earlier immigrants. The improvements between first generation and second are marked. Sixteen percent more second-generation Hispanics get high school diplomas and almost 20 percent get college degrees. Fifty-five percent have a household income over $35,000, up from just 13 percent of first-generation Hispanics. But in the third generation, the number of those without a high school degree rises six percentage points and those with a college degree falls by six points. Households earning more than $35,000 falls by nine points and those working in professional or managerial jobs goes down by eight points. This is not a picture of a complete collapse, but the trends are moving in the wrong direction. Klineberg theorizes that the shrinking of our industrial economy has made many intermediate-level jobs disappear and that our present economy increasingly offers only low-paid, low-skill jobs or well-paid jobs requiring advanced education beyond the reach of many Hispanics. If he is right, the worst statistic in the whole survey is that 25 percent of third-generation Hispanics lack a high school degree.

In 1982 less than half of the area’s population thought that “People who work hard and live by the rules are not getting a fair break these days.” In 1996, 60 percent did, a disheartening trend but one that leads us directly to the survey’s most important positive statistic. One question Klineberg has asked every year is: “Do you agree that if you work hard in this city, eventually you will succeed?” In 1982, 81 percent of the people in the Houston area agreed. That wasn’t a surprise given the ebullience of those days. But it is surprising that that number has never fallen below 75 percent since the survey began, not even in 1985, 1986, and 1987, the lowest, most dismal days of the bust. In 1995, 80 percent said they agreed. With this attitude Houston is not at all representative. In the national survey only about 60 percent have agreed that by working hard someone will eventually get ahead. “This is the civic faith of Houston,” Klineberg said. “When I give a talk and come to this statistic, the chamber of commerce types just love it.” And indeed nothing else on the survey has such a consistent unanimity of opinion. For all the criticisms of Houston, for the inevitable photographs of ramshackle neighborhoods with downtown skyscrapers gleaming behind them, for all the complaints about the humidity, the heat, the sprawl, the endless freeways so often clogged with traffic, the fact remains that it is eternally, overwhelmingly optimistic. And that optimism is based on a belief that the world is basically fair—work hard and you will succeed. Houston’s greatest strength is exactly the way it is most different from the rest of America.