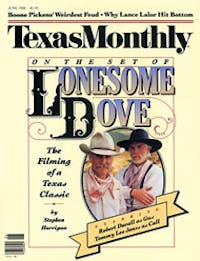 In the television version of Lonesome Dove, I play Cornelius J. Trudell, a St. Louis pastry chef who had fled to Fort Smith, Arkansas, amid allegations that he murdered an elderly society dowager—along with her entire bridge club—by serving them a poisoned charlotte russe. A morbid genius, Trudell works by day as an assistant to the Fort Smith undertaker but labors far into the night perfecting his deadly recipes, and it is he alone who knows that his employer’s sudden surge of business has a direct connection with the local doughnut shop.

Brilliant, sardonic, mysteriously attractive to women, Trudell is one of the most complex characters ever conceived for the screen. Simon Wincer, the director, allowed me unusual latitude in bringing the character to life. Wincer clearly believed so strongly in the necessity for an actor to prepare in solitude, in the sanctum of his own soul, that he paid me the ultimate professional tribute of not consulting me at all.

The role of Trudell was particularly challenging because of the meager screen time allotted to the character—perhaps two or three seconds—and the limitations imposed by the lack of any dialogue whatsoever. That he was not mentioned either in the screenplay or in the novel added considerably to my creative burden. It was the sort of performance that an ordinary actor might not dare essay. But I was not an ordinary actor—I was an extra. Actually, the term I prefer is “background artist.”

“Your background action is going to make this look like a real town,” Matt Bearson, an assistant director, told the Lonesome Dove extras. “It’s very important that it looks like you live in your own world. One of the best ways to do this is to create character for yourself.

I had been an extra once before. I played Salmon LaChance, the dying postmaster from Chug Hole, Nebraska, who watches Willie Nelson ride his horse down the street in Red Headed Stranger. But the role of Trudell was far meatier, and I was so eager to play the part I agreed to work for scale – $40 a day, plus gas money and lunch (to include a choice of dessert).

I have to admit I was a little disappointed when I reported to the wardrobe trailer and, after a great deal of measurement and thoughtful scrutiny, was issued a black suit, a pair of clodhoppers, and a derby. Here I was, in Lonesome Dove, the quintessential cowboy epic, and I had to wear a derby! Not only that, but my scene did not even take place in Texas but in Arkansas. I could have sulked and held up production, the way Marlon Brando did on the set of Mutiny on the Bounty, but I knew if I behaved like a prima donna I risked losing the respect of the crew. So I listened quietly as Matt explained the scene. This was, he said, the part of the movie where a formidable woman named Peach (played by Helena Humann) storms across a busy Fort Smith street to confront Sheriff July Johnson (Chris Cooper) and demand that he take off in pursuit of “that murderer Jake Spoon.”

As the undertaker’s assistant, I was stationed on the boardwalk in front of the funeral parlor. During this scene, the undertaker would be seated on a bench, comforting a widow, while I, Cornelius J. Trudell, awaited the hearse that would deliver her husband’s coffin.

All morning long—upon hearing the command “background”—the extras swarmed into motion. Wagons rumbled, chickens squawked, horses whinnied, citizens greeted one another in pantomime, the undertaker patted the widow’s hand. Each take lasted perhaps a minute at the most, and then it was time to “recycle” and start the whole promenade again.

I held back a little at first, searching for the essential rhythm, the emotional fundament of the scene. Knowing what he knows, I asked myself, how would Trudell behave? As a shrewdly observant psychopath, he could not fail to notice the heated conversation a few paces away between Peach and July Johnson, but his full attention would certainly be elsewhere. I decided to have him kick an imaginary dirt clod off the boardwalk with his foot, a bit of business that seemed to hint at both his restlessness and his evil calculations.

But Wincer kept ordering more takes. He clearly wasn’t satisfied with my performance. We both knew something was missing. Then, just as the cameras started to roll for the dozenth time, it came to me. The widow! Of course! Trudell and the widow are in love! And the fact that her husband is lying in the hearse—after complaining to his wife at dinner that her corn dodgers had a peculiar aftertaste—is no accident whatsoever!

Suddenly, I had the key to the whole scene. The performance flowed out of me. Kicking the dirt clod, I felt remarkably natural, as if I weren’t acting at all. When Wincer yelled “Cut!” I saw him glance vaguely in my direction. It seemed to me that his eyes were filled with respect. “That’s a print,” he said.