Five of the nation’s top ten counties for job growth are in Texas, according to a new assessment from CNN Money. Which of the state’s 254 counties made the cut?

Two of the top-performing Texas counties were in the greater Houston area—Fort Bend County came in second with 78.1 percent job growth in the last decade, and Montgomery County came in fourth with 63.5 percent job growth. CNN declared that Fort Bend’s “favorable tax structure, strong school system and easy access to Houston” make it a “triple threat when it comes to attracting — and keeping businesses,” including Fluor Enterprises, CVR Energy, and Schlumberger. Montgomery County’s growth is centered around the Woodlands, where Anadarko Petroleum and Exxon Mobil are building new facilities.

The greater Austin area was also represented, as Williamson County was ranked third on the list with 73.8 percent job growth. The source of Williamson County’s success? Wooing businesses to the area with “corporate tax breaks and low property taxes,” CNN reported. This approach enticed Dell to open its corporate headquarters in Round Rock.

And two counties in the Metroplex, Collin County and Denton County, came in sixth and seventh, with 55.9 percent job growth and 53.4 percent job growth respectively. Collin County—home to Plano and McKinney—has seen its population grow some 59 percent since 2000. While some jobs have been lost (at J.C. Penney and HP), others businesses (including Denbury Resources) are expanding in the area, CNN reported. Denton County has robust manufacturing and medical services sectors and has drawn families to the area with its promise of “small-town Americana and an affordable way of life,” CNN reported.

The Upside of Inertia 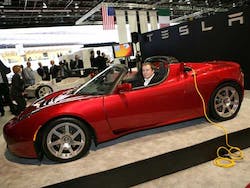 Will Elon Musk Bring The Future To Texas?