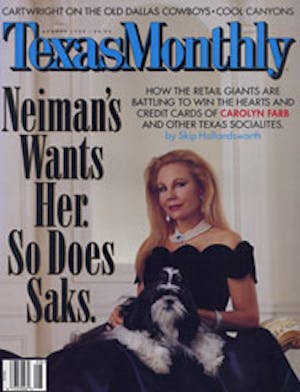 MONA CAIN IS AN ENERGETIC, voluble 44-year-old woman who holds down two full-time jobs, one as an office manager at a Dallas general contracting company and the other at home as a wife and a mother of two children. She does not strike you as the sort of person who would be carrying around a hypo loaded with epinephrine—the hormone also known as adrenaline, which is commonly used to relieve respiratory distress—in her purse just in case the “big one” makes a surprise visit.

The “big one” in Cain’s case is not a heart attack. Cain is allergic to peanuts. She is also hypersensitive to an array of other substances: egg whites, sulfa drugs, and various pollens. But it is her allergic response to peanuts that has almost killed her a handful of times, a hyperresponsiveness so acute that merely touching the food can trigger some degree of anaphylactic shock—the rare multiple-organ allergic response to foods, drugs, or insect venoms that causes several hundred deaths in the U.S. each year.

Mona Cain’s first near-death experience happened when she was two. “We were living in this little town, Batesville, Mississippi,” she says. “My older brother, Fred, had this habit of eating peanut butter sandwiches before he went to bed. Well, he’d eaten some, and then he came to tuck me in and kiss me good-night. Apparently, not long after that, my face swelled up like a balloon and I couldn’t breathe. My parents rushed me to the ER. They had to pump me full of cortisone to save my life. The doctors weren’t real clear on what had caused it.”

Cain’s parents and her family doctor, however, had a suspicion. Cain’s mother had had a severe allergy to iodine as a child, and the horrific symptoms suffered by her daughter reminded her of an anaphylactic attack. By carefully reconstructing the baby’s contact with various substances during the hours leading up to her bizarre attack, they were able to isolate the microscopic traces of peanut butter on her brother’s lips as the instigator.

Because Cain was so young, her parents were able to keep her away from peanuts. When she was five and the family was living in the small Kentucky town of Campbellsville, she began to develop allergic reactions to other substances—in particular, she began having attacks of asthma when she came in contact with horse hair. So her parents took her to nearby Louisville for an allergy test. When the peanut antigen was applied to the tiny pinprick in her back, “it flared up to about six inches in diameter,” Cain recalls. “They kept calling in other doctors to look at it. Apparently they’d never seen anything like it. The doctors were very blunt. They told my parents my allergy to peanuts could kill me if I had even the slightest contact with them. They said the only solution was for me to never even touch them.”

In the ensuing forty years of her life, that has remained the only advice medical science has had for Mona Cain. Though the science of immunology has made estimable strides in the diagnosis and treatment of allergies caused by airborne agents such as pollens and dust, allergies caused by foods remain a nettlesome mystery, and one with potentially fatal consequences. Allergists aren’t even sure how common the affliction is: One study revealed that an astounding one third of American households believed that at least one family member had an allergy to food; other authorities have placed the incidence of true allergic reactions to food at less than one percent of the U.S. population. This is especially ironic given that knowledge of adverse food reactions dates back to Hippocrates himself, who noted a foul reaction to milk in his writings.

Part of the problem has always been in distinguishing between a true allergic reaction to, say, peanuts and an intolerance to them. Both fall under the generic heading of “adverse food reactions” and may prompt similar gastrointestinal and respiratory symptoms, but the mechanisms of pathology are different. In general, a true allergy to a food is instigated by a malfunction of the immune system: The antibody IgE in the blood misidentifies the protein in an ingested food such as peanuts or cow’s milk as a potentially noxious invader and sets in motion a complex immunologic response that results in the release of large amounts of the powerful chemical histamine—which is the agent of all the misery. In an intolerance, the immune system may or may not be in play: The sickness can be caused by a simple contamination in the food, or it may be prompted by a metabolic problem such as the absence of an enzyme critical to proper digestion. The research is uncertain, but most allergists believe that the majority of adverse reactions to food are intolerances, and not true allergies like Mona Cain’s.

This much is known: The preponderance of true food allergies is caused by cow’s milk, egg whites, peanuts, fish, shellfish, soybeans, and wheat. The biochemical culprits are the many water-soluble glycoproteins in such foods, which trigger a massive overproduction of antibodies by the immune system. Chocolate, long thought to be an allergenic agent, is now known not to be. As with allergies triggered by airborne antigens, food allergies tend to be developed early in life and have a strong genetic connection. Scientists now believe that certain infants simply do not develop normal tolerances to certain foods. Some research indicates that insufficient breast feeding may cause the glitch; other findings suggest that introducing solid foods too early in an infant’s development may promote allergic intolerance to them. In either case, as Mona Cain has learned the hard way, medical science still has no therapy for food allergies other than the one Hippocrates stumbled upon: avoidance.

That, Cain has also learned, is much easier said than done. Barely a year after the stern lecture from doctors in Kentucky, she found herself in a hospital emergency room suffering from anaphylactic shock after accidentally ingesting some peanut butter. “I’d bought some Lance’s cheese crackers at church,” she says with a rueful smile. “I don’t remember knowing they had peanut butter with them. By the time I realized, it was too late. I really crashed that time. They had to pump me full of shots again to revive me.” And when she was sixteen and visiting her brother and his wife in Houston, the dreaded food once again slipped into her body with insidious stealth. They’d gone on a picnic, and Cain had scarfed down a chocolate chip cookie from a jar her sister-in-law had brought along. Unbeknownst to her, the jar also contained peanut butter cookies. A few crumbs and moments later, her face was puffing up and her respiratory passageways were swelling shut as the anaphylactic paroxysm erupted.

At the small hospital in nearby Channelview, Cain encountered nothing but confusion, disbelief, and bureaucratic red tape. The ER personnel weren’t sure they could treat her without parental approval; moreover, they didn’t seem familiar with anaphylaxis in response to food. “Finally, my brother stepped in and told them, ‘Treat her or she dies.’”

Perhaps it is the rareness of Mona Cain’s affliction that has hampered science in its pursuit of successful treatments other than the all-but-impossible avoidance diet. Immunotherapy (the allergy treatment in which a tiny extract of the offending allergen is injected into the patient at regular intervals over a period of months or years to build tolerance), so successful in treating allergies caused by airborne agents, has an unproven track record when it comes to food allergies. “Drugs such as antihistamines will help with food-induced hives, but not with wheezing,” says allergist Rebecca Gruchalla of the University of Texas Southwestern Medical Center at Dallas. “Immunotherapy hasn’t proved out with foods. In fact, it can be dangerous. The only proven treatment is to not eat the food.” Unfortunately, strict avoidance can cause its own medical problems. Many sufferers become so wary of what they eat that their overall nutrition suffers.

Recent research has hinted that, because food allergies may be linked to infants’ early consumption of certain protein-rich foods, postponing the ingestion of those foods might promote tolerance. But while such postponement in a test group of infants seemed to have a positive effect on allergy to cow’s milk, it revealed no similar benefit for allergies to fish or eggs.

As for Mona Cain, she isn’t expecting a magic bullet anytime soon. “Forty years since my first problem, and they still can’t tell me anything new,” she says. “I’ve learned to treat myself. My parents taught me early on to take care of myself and try to lead a normal life. It’s really the only way. But you have to realize that no matter how careful you are, it can always sneak up on you.” Cain’s thirteen-year-old son, Nathan, has displayed a mild allergy to peanuts and more-significant asthmatic reactions to airborne allergens, and she says she’s trying to teach him the same sort of vigilance. “It’s a pain, even for an adult, to have to read the labels on everything you eat, to have to ask at restaurants what things were fried in, what salad dressings were mixed with. A lot of the time, I just opt for a steak and a baked potato,” she says with resignation, “because you just never can tell.”

The last time Cain was reminded of that was six years ago, when she was working at the Crescent Court Hotel in Dallas. She was eating some Oriental chicken for lunch when she felt that familiar sickening sensation of swelling in her face and throat. She rushed back to the kitchen to ask the chef what the chicken had been prepared with. “Initially, he couldn’t recall any peanuts in the dish,” she says. “But then he remembered that he had basted it with something including peanut butter. By that time the whole thing was beginning to set in, so I was rushed to St. Paul [Medical Center].” At the ER, she confronted the by-now-predictable bewilderment at her condition. “I’m trying to tell them what is wrong, that I know what is wrong, and they want me to fill out papers,” she recalls. “Finally, I told them to check my blood pressure and pulse. When they saw the irregularities, they got moving.”

Since then, Cain has started packing the hypodermic of epinephrine, which in the event of a sudden attack not only restores normal respiration but also jacks up her plummeting blood pressure. “You tell people your problem, and they just don’t believe you,” she says. “But it’s real. People should take it seriously—especially parents. You almost die a few times, and it changes your perspective.”