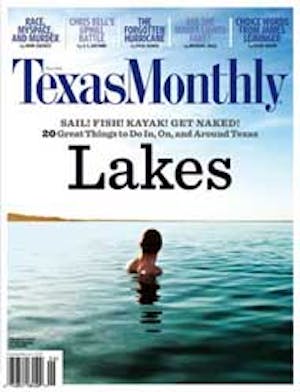 NAME: Clint Dempsey | AGE: 23 | HOMETOWN: Nacogdoches | QUALIFICATIONS: Midfielder for the New England Revolution / Named Major League Soccer Rookie of the Year in 2004 and to the Best XI in 2005 / Will play on the U.S. team this month in the 2006 FIFA World Cup, in Germany

• I grew up playing every sport I could—baseball, basketball, soccer. We didn’t have a Pop Warner team, though, so I played just a little bit of football.

• It never frustrated me that football was more popular in Texas, because eventually soccer was all I knew. I didn’t really care if anybody came to watch; it was just what I wanted to do.

• A midfielder bridges the gap between the defense and the forwards. I would say it’s the most important position, but that’s just me being a midfielder.

• When you come into the league as a rookie, you always have to do stuff, so I told my teammates I could freestyle. Growing up near Houston, I’d been influenced by a lot of hip-hop, with Swishahouse and screw music. My friends and I would make up rhymes and drive around and go to parties. So guys in the league asked me to rap some, then some more. And then Nike asked me to record a track, “Don’t Tread,” and a video to promote the World Cup. Now they play it on some of the ESPN games.

• The group we’re up against in the World Cup—Italy, Ghana, and the Czech Republic—is a tough one. Anytime you’re in the World Cup, it’s tough. It’s everybody playing as hard as they can.

• I think maybe we could get top six, top seven. When people look at soccer and look at America, they don’t give us respect. But actions speak louder than words. Watch and see.

• Before, none of my family watched soccer. Now they watch every game. Sometimes when they can’t get the games in English, they turn to the Spanish channels.

• A goal is basically the game: You win by one goal. The fans get so crunk, so hyped up when you score. You feel like you have all the power.

• Yeah, I dance after a goal. Fans want you to do something, and I do whatever hits me, because if I’m not having fun, what’s the point of playing?

• I haven’t had the chance to meet [Diego] Maradona, but I met Pelé. You have a feeling of respect, but you’re also trying to do things in soccer, so it’s not like you’re a superfan or obsessed. It’s just cool; it’s respect.

• It means pretty much everything to me to be in the World Cup. It’s the only dream I’ve had since I was a kid, so I can die a happy man.