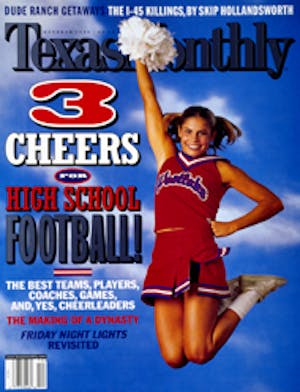 One of celebrity’s immutable laws is that you’re nobody until your private life has been picked apart by the predators of the New York media. By that standard, J. Shelby Bryan is well into his Warholian fifteen minutes. The Houston native has been a tabloid staple lately, and—wouldn’t you know?—it’s not because of his work as the CEO of Denver-based ICG Communications or his fundraising for the Democratic party. What makes him gossip grist is his relationship with Anna Wintour, the all-powerful editor of Vogue, whom he met last year at a charity ball chaired by Anne Bass and has been romantically involved with ever since—even though both are married.

Who is the urbane cowboy who’s lassoed, Horse Whisperer–style, a steely, stick-thin Brit? For one thing, he has undeniable Texas bona fides: He is the great-great-great-great-nephew of Stephen F. Austin and is also descended from William Joel Bryan, for whom the town of Bryan is named. His maternal grandfather, Evan Shelby Smith, for whom he is named, was a land baron in Brazoria County. His father, James Perry Bryan, was a lawyer for Dow Chemical and a regent at the University of Texas. His brother, J.P., founded Torch Energy Advisors, a Houston oil and gas company, and owns the tony Gage Hotel in the West Texas town of Marathon.

Bryan was born in Houston on March 21, 1946. He played football at Lamar High School—“I was a Redskin,” he says proudly today—and also at UT-Austin, but only briefly. “I wasn’t any good. When I started at Texas, there were three or four other guys who were as bad as I was. Within a few weeks they all got hurt, so I was the worst.” In college he studied history and art, spending his last year in France at the University of Grenoble; after graduating he enrolled at UT’s law school, where his classmates included Lloyd Doggett, now a U.S. congressman from Austin, and Fred Baron, a founding partner of the Dallas law firm Baron and Budd. “He was very intelligent, motivated, and hardworking,” Baron says. “I used to call him The Great Gatsby—you could tell he was going to be successful.”

Armed with a law degree, Bryan spent the first six months of 1971 working for Ralph Nader in Washington, D.C, then went on to Harvard Business School. After a few years in mergers and acquisitions at Morgan Stanley, he and a lawyer friend founded Millicom International Cellular, one of the nation’s first cellular telephone companies. For fifteen years Bryan served on its board; in 1985, with global growth plans on the table, he moved to New York and assumed the titles of president and CEO. There he remained until 1995, when he retired—but later that year he was enticed by an invitation to turn around ICG, a floundering company with designs on competing in the fiber-optic networking business. Today Bryan can boast annual revenues of $500 million, with $1 billion projected for 2000.

Equally impressive is Bryan’s record as a political rainmaker. A lifelong Democrat, he has given at least $350,000 to the party and its candidates since late 1995, according to the Austin-based campaign-finance watchdog group Texans for Public Justice, and he’s raised his fair share too: In 1997 and 1998, when he served as its national finance chair, the Democratic Senatorial Campaign Committee pocketed more than $54 million. And while he has no official role in the 2000 campaign, Bryan plans to actively support Al Gore for president and Hillary Clinton for U.S. senator in New York; both are friends.

As for the first lady’s appearance on the cover of last December’s Vogue: Bryan insists it was a coincidence, and that’s about all he’ll say regarding his paramour or her magazine. “There’s an old-fashioned view that your personal life should be kept private, and that’s my view,” he says. Still, he confirms that he and his second wife, Katherine, have separated. As of yet, while lawyers have been hired and back-channel settlement talks have commenced, no divorce paperwork has been filed. But chances are it will be soon, particularly if the predators are right about his desire to one day become Old Man Wintour.