The Environmental Protection Agency announced new rules on Wednesday that govern how much mercury and other pollutants power plants can spew out.

“Environmentalists, who say that six of the nation’s 10 most mercury-emitting power plants are in Texas, hailed the rule,” the Texas Tribune‘s Kate Galbraith wrote. But the new standards, which require plants to install scrubbers or else shutter, are “unlikely to improve Texas officials’ low opinion of the agency.”

According to the Texas Sierra Club, coal-fired power plants in Texas were responsible for 16.9 percent of all the mercury emitted into the air in the U.S.; Dallas-based Luminant is the worst offender.

EPA head Lisa Jackson touted the new requirements, which go into effect in 2016, as a “victory for public health . . . Before this rule, there were no national standards limiting the amount of mercury, arsenic, chromium, nickel and acid gases,” she said in her announcement. (The Houston Chronicle’s Puneet Kollipara, writing at Fuel Fix, said the new rules will slash mercury emissions across the country by ninety percent.)

Rick Perry reacted to the ruling from Iowa, Galbraith reported, promising a crowd in Muscatine that as president, he would reverse every regulation the Obama administration enacted. “It’s a fountain of regulations coming out of DC,” Perry said.

There have been attempts to thwart the ruling for months. Back in August, Donna Nelson, the head of the Texas Public Utility Commission, came out swinging against the rule, claiming it would “detrimentally impact the reliability of electric service and the economy in Texas.” Texas Attorney General Greg Abbott, who has sued the EPA multiple times, filing a brief with the court to delay the ruling.

However, the CEO of Houston-based Calpine, told the Wall Street Journal in a letter that “the rules were achievable for the power industry,” Fuel Fix reported. 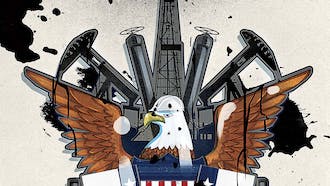