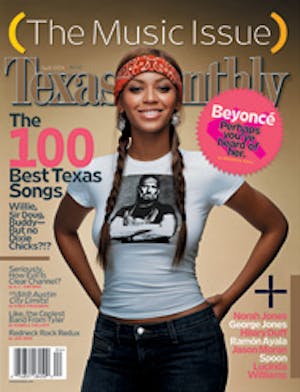 I HAVE A VERY COMFORTABLE LIFESTYLE as a jazz musician. I spend Monday through Sunday doing pretty much what I want. Most people have to wait to go to the movies on Saturday at noon. But every day is a Saturday for me; I can go to the movies anytime. I can shop for designer furniture all day long or go to a museum. Not having a media machine behind me helps. If Matt Damon makes a movie, he has to do fifteen interviews, then fly to L.A. to do Jay Leno, then fly to New York to do David Letterman. He can’t walk down the street without being pounced on by the paparazzi. He has no privacy. I’m anonymous. I can do whatever I want in anonymity.

Growing up, I really cared about Thelonious Monk, Horace Silver, McCoy Tyner, Herbie Hancock, Andrew Hill, Muhal Richard Abrams, and Jaki Byard. Outside of that arena, I grew up in the age of hip-hop, with Public Enemy and De La Soul. Those are some of my true heroes.

When I was a junior in college, I thought about not continuing with my music, because I didn’t think it would make for a lucrative career. My father was starting up an investment banking firm in Houston at the time, and even though it was totally not me, I thought, “That seems exciting.” But when I would tell friends what I was considering, they would say, “I don’t think you should stop playing.” When I was a senior, I joined Greg Osby’s band, and that put me out in the scene. It was great. Ever since then I’ve been able to scrape by solely on my music. I haven’t had to get a day job since I graduated. In the end, it’s not how much money you make; it’s what you do with it. I know people who say that it’s a struggle to raise three children on a household income of $250,000, and I know people who say that raising three children on $70,000 a year is no struggle at all.

My situation is great. I’ve never worked more than I have in this downtrodden economy. If this is the worst of times, then what’s the best of times? The alternative lifestyle of a musician is never easy; you’re a nomad, basically. But you surround yourself with people who feed your spirit. The amount of love you receive is what dictates whether your place in the world is big or small, whether you grow as a human being. I know a lot of jazz musicians, great men and women, who are still performing and still happy at 60 or 70 years old. Few pop stars who start at 18 or 22 are still singing at that age. That’s why I like jazz. It’s like golf: You can play until you’re dead.

At a certain point, you ask yourself, “Is my career about music or money? Is my painting going to be sold for $250 while I’m alive or $300 when I’m dead? How can I make the most of my time here? How can I mature as an artist?” That becomes the dilemma. For me, depending on airplay or record sales to make money is silly. I make most of my money touring. So I’m gone a lot of the time.

Last year I was on the road for seven months, not counting two weeks’ worth of dates I played here in New York. I don’t play in New York often, because it gets boring for the audience. If you do it every day of the year, you get overexposed. That said, one of my favorite places to play is the Village Vanguard. I really like the Kimmel Center, in Philadelphia, and the Teatro Olimpico, in Vicenza, Italy—it’s more than four hundred years old, and the sound is great. Most small towns throughout Italy and Germany have major jazz festivals. I think Europeans’ appreciation for culture is a lot higher than Americans’. They experience it more frequently.

At a club, I play before maybe 100 or 200 people. In a hall, 400 or 500. There are special occasions when I play for bigger crowds. There were 1,500 people in the audience at the Royal Festival Hall, in London, when I played there last November, and when I opened for Cassandra Wilson, in Philly, also last November, there were 2,000. In a case like that, we come out and play with a lot of energy. We only have 45 or 50 minutes, but we give you a really solid meal for that amount of time. And we make the next band work a lot harder.

When I’m not on tour, my schedule is very loose. I enjoy being at home in my apartment. I have hobbies. In New York there are many great art galleries; I want to see what they’re doing now. Or sometimes I watch four films in a day. Life is art; everyday experience makes for depth in your field. The other day I was watching a documentary about Balanchine. He was inspired by the movements of his cat: He’d throw his cat in the air, watch the cat turn, memorize the cat’s moves, and then give that choreography to his dancers. You’re looking for material at all times, whether you know it or not.

Many times I’ve thought about what I’ll do next. Nothing is guaranteed, especially your health. Knowing what I know, if my hands were to go, I could still teach. At a certain point, before I got serious about music, I was serious about zoology, about studying reptiles and snakes. In the music business, I’ve dealt with a lot of snakes, mostly garter snakes, and I’ve been able to sidestep them. Sometimes I’ve been nipped on the ankle, but nothing too serious.

Jason Moran, 29, was born in Houston and lives in Harlem. His albums include Soundtrack to Human Motion, Modernistic, and most recently, The Bandwagon: Live at the Village Vanguard.